The Shiba Inu price continued its positive start to the ongoing week, as buyers look to push SHIB past $0.000021. SHIB had registered a marginal drop on Friday, falling by 0.28%, before recovering on Saturday, rising by over 2% and settling at $0.000021. On Sunday, the price fell back, dropping by nearly 3% and ending the weekend on a bearish note. The price recovered on Monday, rising by 1.52%, as buyers looked to push the price towards $0.000022, with the price up by nearly 2% during the ongoing session.

The Shiba Inu price was quite bearish over the previous weekend, starting with a drop of nearly 16% on Friday, slipping below the 200-day SMA and settling at $0.000022. The price continued to drop on Saturday, as SHIB fell by nearly 8%, before recovering on Sunday, rising by over 9% and ending the weekend at $0.000022. However, SHIB fell back on Monday, dropping by nearly 6% and falling to $0.000021. Tuesday saw SHIB continue to drop, falling by 0.90%, before registering a marginal recovery on Wednesday and rising by 0.43%. 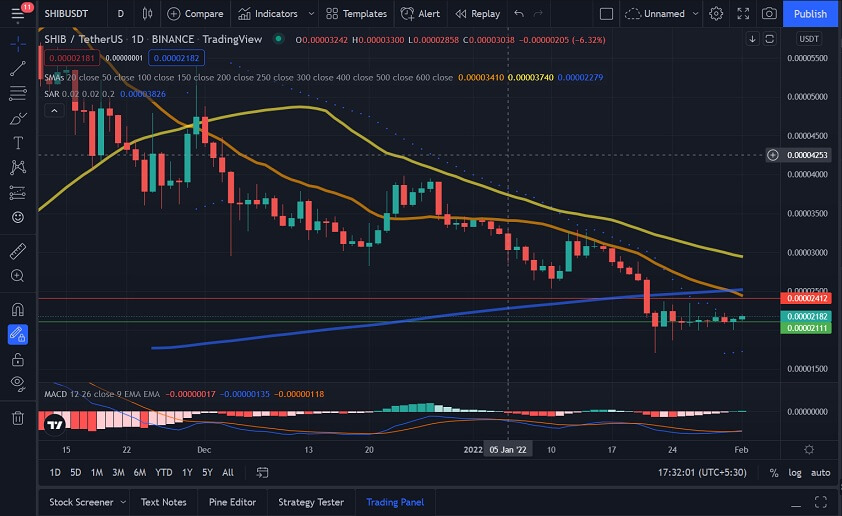 The Shiba Inu price continued to push higher on Thursday, as it registered another marginal increase, rising by 0.85% before falling back on Friday and dropping by 0.28%. The weekend started on a positive note for SHIB, as it rose by over 2%, before falling back in the red on Sunday, dropping by nearly 3% and ending the weekend at $0.000021. Monday saw SHIB recover, as the price rose by 1.52%, with SHIB currently up by over 1%, as buyers look to push the price to $0.000022.

Looking at IntoTheBlock’s IOMAP for the Shiba Inu price, we can see that SHIB faces strong resistance at around $0.000024. At this price level, over 1.39k addresses have sold more than 49.6t SHIB.

We can see that the MACD is bullish, but if SHIB continues to drop, we could see it flip to bearish. 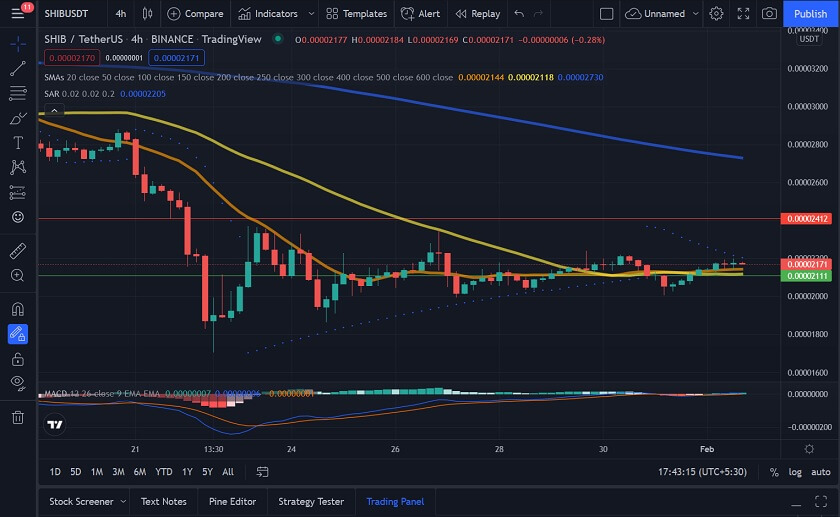 Like the rest of the crypto market, Shiba Inu has experienced a slump in value in recent months. It lost over 30% of its value in the past week. However, things might be looking up for the asset as it continues to maintain footing in the top-15 crypto rankings.

The wave in price was also correlated with an increase in market cap enough to see Shiba Inu overtake Polygon’s MATIC in CoinMarketCap”s ranking before getting reflipped. Shiba Inu posted about $12.3 billion on the day compared to Polygon’s just above $12 billion, an almost $300 million difference.

Shiba Inu recently sat at 15th in the rankings, with an $11.6 billion market valuation, while Polygon was just overhead at 14th. Shiba Inu still has to close the gap with Dogecoin, which occupied 10th place on the rankings with a market cap of over $18 billion.

Polygon’s rise against Shiba Inu has been attributed to institutions taking advantage of recent price dips to purchase large quantities of the token. At the time, the Polygon network had a flurry of positive news, including YouTube’s head of Gaming Ryan Wyatt leaving the video-sharing platform to join the team at Polygon.

Currently, the risk appetite of market participants seems unclear, and as such, more price volatility is likely to be in the cards for the Shiba Inu token. Despite recent market dips, Shiba Inu is still up over 40,000%, making it one of the best-performing assets in the past year.

Looking at the Shiba Inu price chart, we see that SHIB has started the current week on a fairly positive note. If the current sentiment persists, we could see SHIB push to $0.000022. However, if sellers manage to retake the session, we could see the price drop to $0.000020.