The Shiba Inu price managed to stay above $0.000043, thanks to strong support at this level allowing the price to push up marginally. SHIB had been quite bearish over the weekend, even though it had registered a sharp increase on Friday that saw the price push up by over 14%. SHIB registered a marginal drop on Saturday, as sellers took control over the weekend. Sunday saw a fall of over 7%, as SHIB dropped to $0.000044 before slipping below the 50-day SMA on Monday.

The Shiba Inu price had started the previous weekend on a bearish note, as the price registered a drop of 1.28% on Saturday. However, Sunday saw the price recover, as it rose by almost 3%, ending the weekend at $0.000053. Monday saw SHIB post a marginal increase before dropping by almost 10% on Tuesday and falling to $0.000048. SHIB stayed in the red on Wednesday, registering a marginal drop, before another sharp drop on Thursday drove the price down to $0.000042. 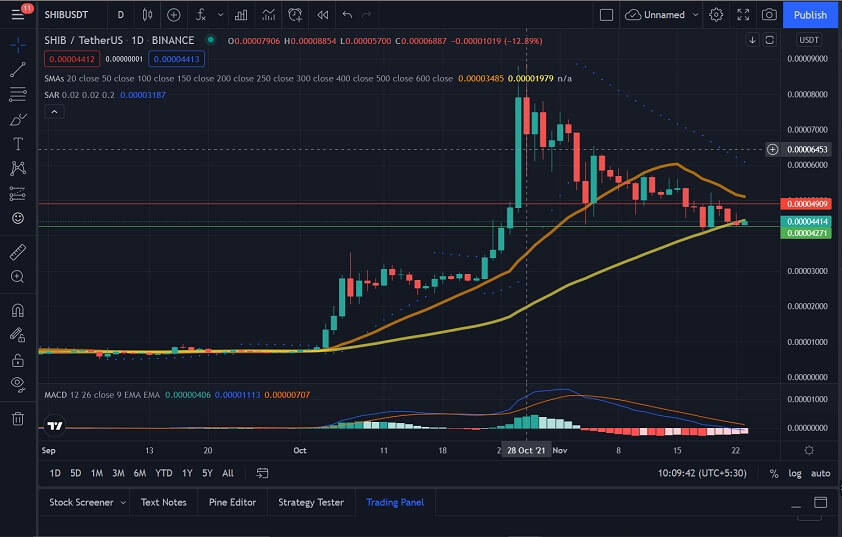 After dropping to $0.000042, the Shiba Inu price made a strong recovery on Friday, rising by over 14% and settling at $0.000048. However, the price fell back over the weekend, registering a drop of 1.75% on Saturday and 7.45% on Sunday to end the weekend at $0.000044, just above the 50-day SMA. Monday saw the bearish sentiment continue, as the price dropped below the 50-day SMA, before recovering during the current session.

We can see that SHIB has support at $0.000043, indicating that the price could push higher. If the price does increase, we could see the MACD flip to bullish. 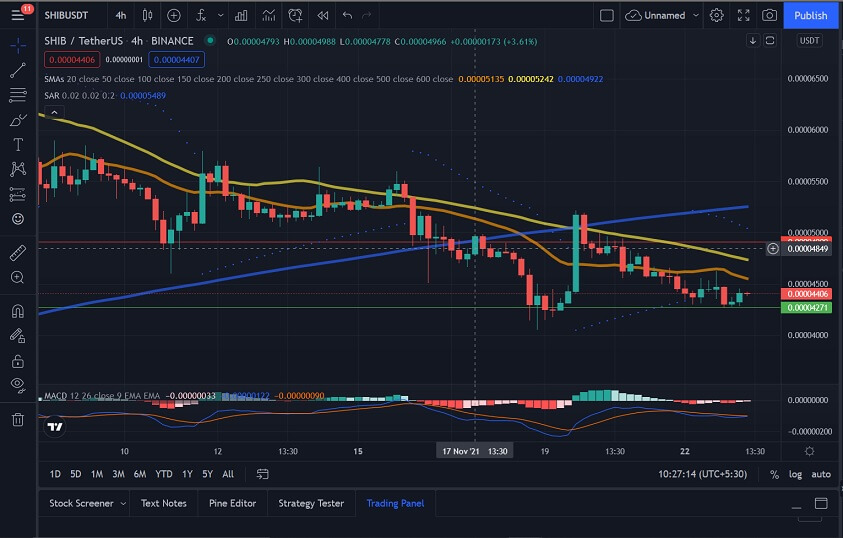 SHIB And DOGE Top Crypto Popularity List In 30 US States

According to research conducted by The Advisor Coach and obtained by Business Insider, joke coins Dogecoin (DOGE) and Shiba Inu (SHIB) were the most-searched tokens on Google in 30 US states.

Dogecoin, founded in 2013, ranked top in 23 states, including Florida, Illinois, and Michigan. The rise in interest can be partially attributed to the token’s significant returns in 2021 alongside endorsement by celebrities, including Tesla CEO Elon Musk.

Elsewhere, SHIB was the most searched cryptocurrency in seven states, including Califonia and Nevada. Similarly, SHIB’s surge in value can be tied to the token’s impressive returns since hitting the market last year. The coin that ranked fourth overall has skyrocketed in value by at least 14,000,000%.

Interestingly, Bitcoin was the most-searched asset in just 10 US states, including Connecticut, Alaska, and Mississippi rank in the second spot overall. Ethereum came in third place as the most searched cryptocurrency in eight states. Notably, both Bitcoin and Etrhereum searches were cumulatively low when compared to Dogecoin.

The searches highlight the impact of the hype around the two meme coins that have outshined historical assets that have remained prominent in the digital currency space for years. On the other hand, Ethereum ranking higher than SHIB indicates that the historical cryptocurrencies still have strength.

Looking at the Shiba Inu price chart, we see that SHIB has risen marginally during the current session. If the price continues to push up, we could see SHIB push past the 50-day SMA and settle at $0.000045.