The Shiba Inu price started the previous week on a bearish note, as the price dropped below the 50-day SMA on Monday. The price continued to drop on Tuesday, falling by over 3%. Wednesday saw another significant drop, with the price falling by almost 10% and settling at $0.000037, before pushing up by almost 13% on Thursday and settling at $0.000042. However, Friday saw SHIB back in the red as the price dropped by 9.42% and settled at $0.000038. 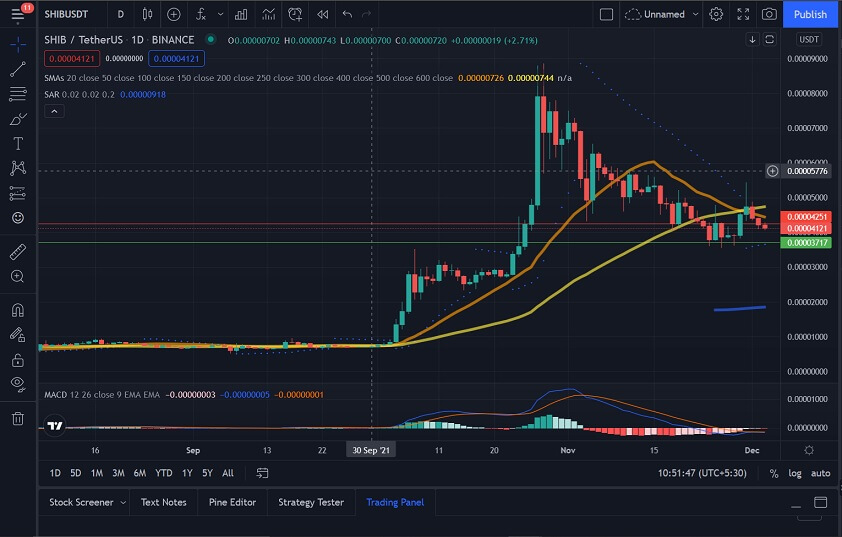 After dropping to $0.000038 on Friday, the Shiba Inu price pushed up marginally on Saturday before registering a marginal drop on Sunday. The price rallied on Monday, as SHIB started the week by registering an increase of over 15% and moving to $0.000045. Tuesday saw SHIB push above the 20 and 50-day SMAs and settle at $0.000047. SHIB fell back on Wednesday, as the price dropped back below the 20 and 50-day SMAs and settled at $0.000044. The drop continued on Thursday, as the price dropped to $0.000042 after dropping by over 4%. The current session sees the price at $0.000041, with sellers looking to push the price further down.

The Parabolic SAR is currently bullish, but if the price continues to drop, we could see it flip back to bearish.

Looking at IntoTheBlock’s IOMAP for the Shiba Inu price, we can see that SHIB faces strong resistance at around $0.000042. At this price level, over 21,000 addresses have sold more than 19,123 billion SHIB. 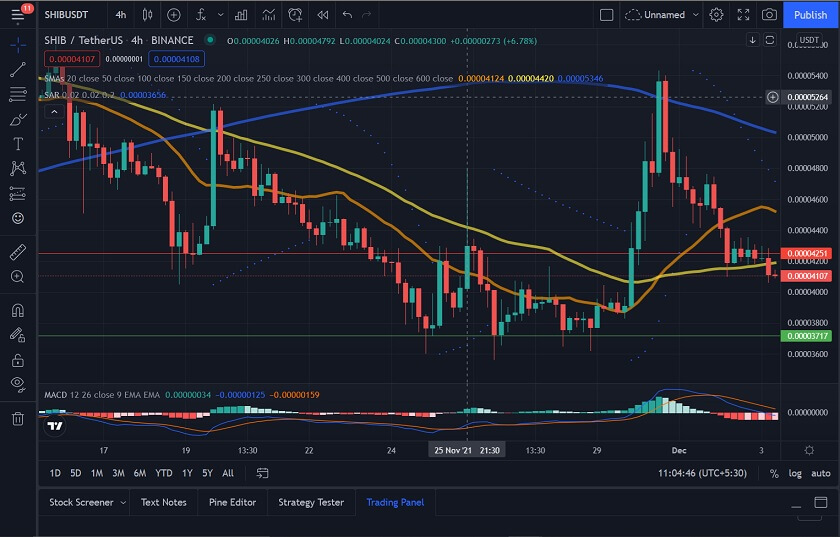 2TM, the parent company of the number one exchange in Latin America, raised another $50.3 million in late November. This occurred just months after raking in $200 million in July during a Series B investment round spearheaded by Japanese conglomerate SoftBank.

Last month, Korbit became the first cryptocurrency exchange to list Shiba Inu in South Korea. Ask The Doctor, a Canadian online healthcare company, recently added $1.5 million worth of Shiba Inu to its balance sheet, according to an announcement posted on its Twitter account. Kraken facilitated the seven-figure buy.

The medical information website will also begin accepting the meme cryptocurrency with its healthcare partners. It already allows clients to pay with Dogecoin for certain services in the US and Canada.

The Toronto-based company was launched in 2010, allowing its clients to connect with medical professionals via text messages or video streaming. Notably, its list of co-founders includes former NBA player Israel Idonije and former NBA star Dikembe Mutombo. In 2016, Ask The Doctor started accepting Bitcoin payments, becoming the first healthcare company around the globe to embrace crypto.

Looking at the Shiba Inu price chart, we see that SHIB has been quite bearish during the ongoing week. We could see sellers retain control of the session and push SHIB to $0.000040 during the current session.