The Shiba Inu price fell back during the ongoing session, down by over 4% after a hugely bullish weekend. SHIB had pushed up by nearly 7% on Friday, rising to $0.000022. The weekend saw SHIB remain bullish, as the price rose by 1.40% on Saturday. Sunday saw SHIB register a spectacular surge, as it rose by nearly 27% and rose to $0.000028 before dropping back during the ongoing session.

The Shiba Inu price registered a marginal drop on Friday, starting the previous weekend in the red. SHIB recovered on Saturday, rising by over 2% but fell back on Sunday, dropping by 2.63% and ending the weekend at $0.000021. Monday saw SHIB back in the green as the price rose by 1.52% and then pushed up by 1.21% on Tuesday. However, SHIB fell back in the red on Wednesday, dropping by nearly 5% and settling at $0.000020. 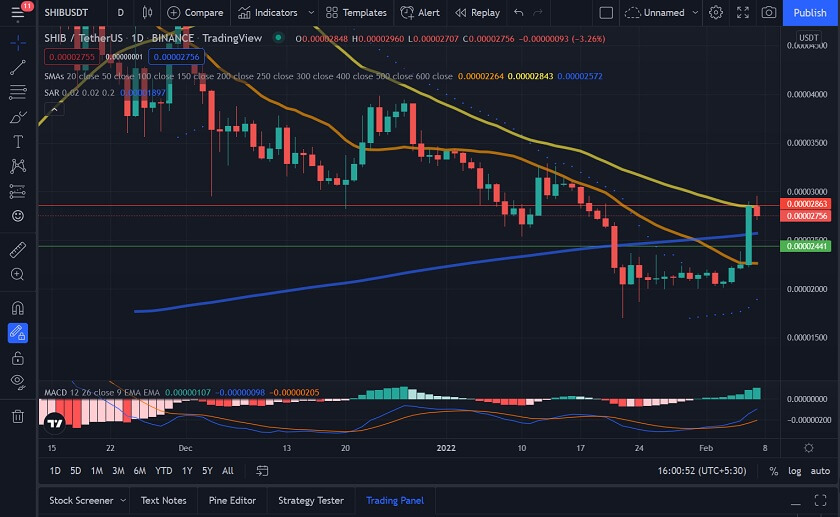 After dropping on Wednesday, the Shiba Inu price recovered on Thursday, registering a marginal increase, and then pushed up by nearly 7% on Friday, rising to $0.000022. SHIB remained in the green over the weekend, rising by 1.40% on Saturday. Sunday saw SHIB register a spectacular increase, as it surged past the 20 and 200-bar SMAs, rising to $0.000028, where the 50-bar SMA acted as resistance. The current session sees SHIB down by over 3% as sellers look to drive the price down.

IntoTheBlock’s IOMAP for the Shiba Inu price shows us that SHIB has strong support at around $0.000024. At this price level, 2000 addresses have bought more than 50t SHIB. 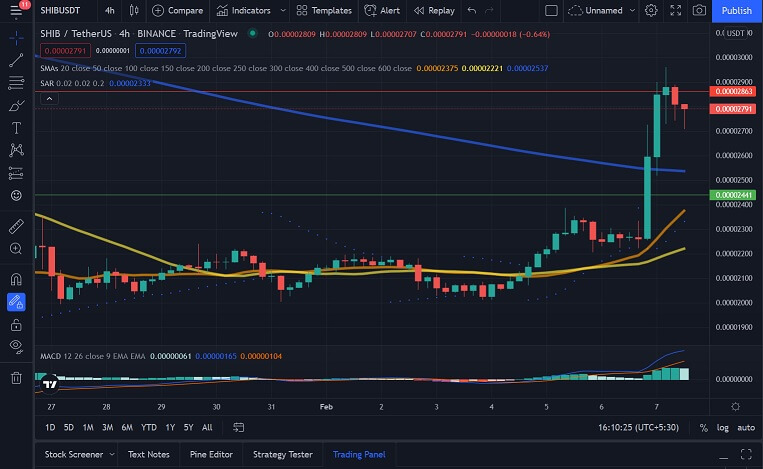 Shiba Inu Whales Control 26% of Total Supply of Token: Here's How It Might Be Bullish

Following the recovery of the altcoin market, Shiba Inu and other smaller altcoins have experienced a sudden price increase, with SHIB gaining around 7.5% at its recent daily peak. While retail traders are buying into the asset, the whales that control 26% of the supply are facing $100 million worth of profit.

According to data from WhaleStats, whales currently control around 26% of the total supply. The tracker does not count exchange-related addresses and companies, determining the accurate share of large on-chain owners.

With the increasing number of whales, assets tend to lose the previous volatility present when almost 100% of all traders on the market were short-term speculators. As the holders' composition suggested, Shiba Inu is currently considered a mid-term asset, with most holders entering the asset at least six months ago.

When whales take control over the asset, the correction tends to stop as large wallets are accumulating the token instead of selling it. Large selling volumes usually appear at the end of bullish rallies, where retail buying power exceeds unrealized losses that then turn into unrealized profits.

The accumulation of Shiba Inu by whales began when the token lost almost 30% of its value in days after reaching the all-time high in October. Whales have been buying up to $300 million worth of SHIB in a matter of days.

However, SHIB has failed to deliver any rebound on the market, leaving the investors with a 40-60% loss.

18.8 Million SHIB Burned in 24 Hours but Lots More to Be Gone in 10 Days: Etherscan Data

Shibburn Twitter account recently shared Etherscan data, noting that over twenty-four hours, around 19 million Shiba Inu tokens were burned (taken permanently out of circulation). It took various groups inside the SHIB community to burn this amount of crypto. By now, nearly 41 % (totaling 410.3 trillion tokens) of the overall initial SHIB of one quadrillion supply has been burned.

Later on, 1,882,892 tokens were sent to a dead wallet. On February 14, another regular SHIB burn party hosted by Bigger Entertainment crypto record label is taking place on YouTube. The previous similar event happened on December 26, when 239 million SHIB tokens were burned.

On 14th, a lot more Shiba Inu can be destroyed, the founder of Bigger Entertainment, Steven Cooper, wrote on his Twitter. Earlier, he posted a tweet inviting members of the SHIB army to join in by purchasing a ticket to join the event for $5. He noted that the money raised would be used for buying SHIB, which will later be burned.

However, this one is different from the previous burn party, Cooper claimed. SHIB community members would be burning SHIB by simply tuning in to the live video on YouTube.

"This will be the first burn party where you’ll be burning #SHIB just by tuning in. So make sure to mark your calendars for Feb. 14th at 2PM CST."

Looking at the Shiba Inu price chart, we can see that SHIB has clawed back significantly during the current session, with the price only marginally down at the time of writing. If the price can continue to push higher, we could see SHIB push back towards $0.000030. However, if the price fails to recover, we could see it drop back to $0.000025.