The Shiba Inu price has registered a marginal increase during the current session, as buyers look to take control of the market. SHIB had dropped by nearly 6% on Friday, falling to $0.000029. The weekend saw SHIB continue to drop, falling by over 4% on Saturday and settling at $0.000027. Despite the bearish sentiment, SHIB was able to register a marginal recovery on Sunday before falling back into the red on Monday, dropping by 5.52% to $0.000026.

SHIB had gotten off to a positive start to the previous weekend, rising by 2.34% on Saturday. However, with the 20-day SMA acting as resistance, the price fell back on Sunday, registering a marginal drop and falling to $0.000034. SHIB continued to drop on Monday, falling by nearly 3% to $0.000033. Tuesday saw SHIB continue to drop, falling by nearly 2%, and then dropping by over 6% on Wednesday and falling to $0.000030. The price registered a marginal increase on Thursday despite the bearish sentiment. 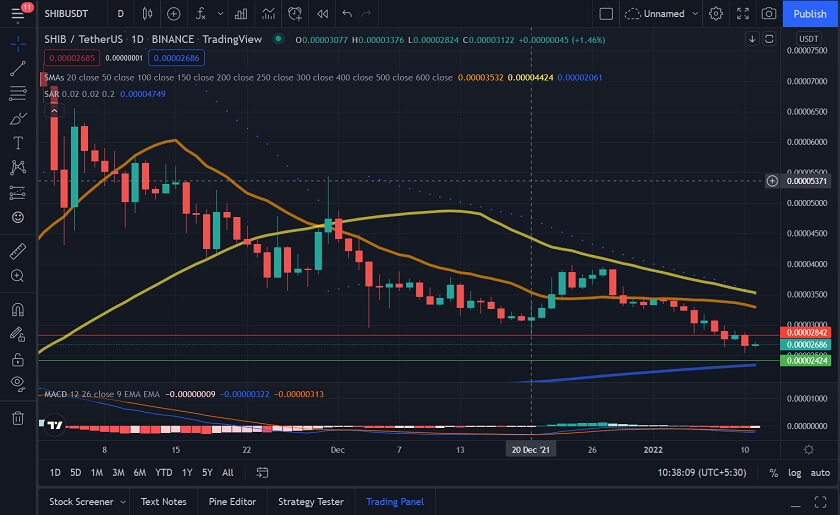 IntoTheBlock’s IOMAP for the Shiba Inu price shows us that SHIB has support at around $0.000034. At this price level, over 1.48k addresses have bought over 46,000 billion SHIB.

We can see that the Parabolic SAR and MACD are both bearish, indicating that the price could drop further. However, if SHIB recovers, we could see them flip to bullish. 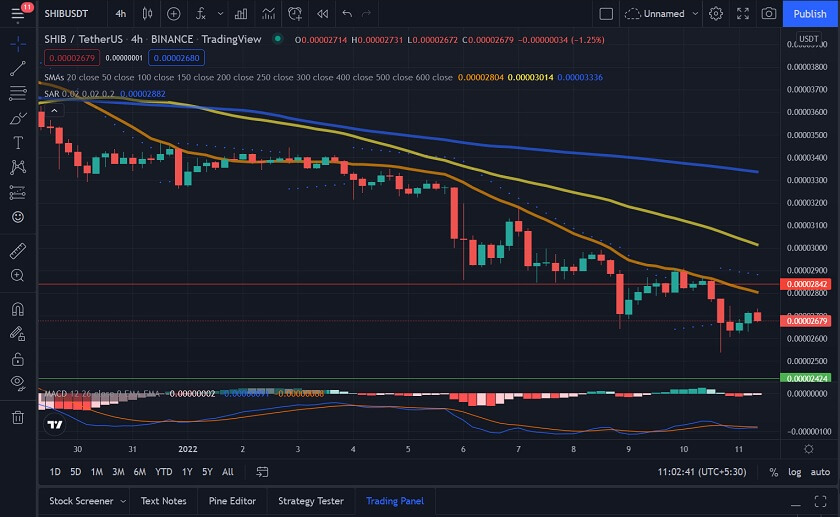 The Shiba Inu meme-token has officially ended its reign on the altcoin market by becoming a highly unprofitable token, according to the composition of holders currently making money by holding the asset.

As IntoTheBlock data suggests, 57% of Shiba Inu holders are not in profit, with 52% holding at a loss and 5% breaking even. Only 44% of token holders are profiting with it, which means their entries were below the current price.