The Shiba Inu price is back in the green during the current session, with SHIB registering an increase of over 2% and starting the week on a positive note. SHIB had registered a drop of over 4% on Thursday but recovered on Friday, rising by 4.36% and moving to $0.000024. The price fell back in the red over the weekend, falling by 1.77% on Saturday and then dropping by 4.17% on Sunday to end the weekend at $0.000023 before recovering during the ongoing session.

The Shiba Inu price chart shows us that SHIB had started the previous weekend on an extremely bearish note, dropping by over 2% on Saturday. SHIB continued to drop on Sunday, dropping below all three SMAs and ending the weekend at $0.000025. Monday saw SHIB remain in the red, dropping by nearly 6%, falling to $0.000024 before recovering on Tuesday, rising by 3.74%. However, SHIB fell back in the red on Wednesday, registering a marginal drop of 0.36%. 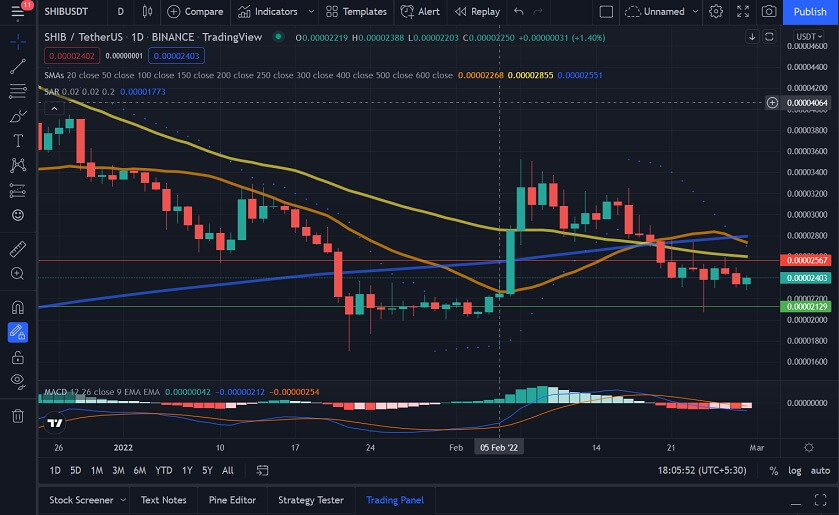 After registering a marginal drop on Wednesday, the Shiba Inu price fell back considerably on Thursday, dropping by over 4% to $0.124 after a highly volatile session. However, the price recovered on Friday, pushing up by over 4% and moving to $0.000024. Despite the fairly significant increase on Friday, SHIB fell back in the red over the weekend, dropping by 1.77% on Saturday and then over 4% on Sunday to end the weekend on a bearish note at $0.000023 before recovering during the current session.

We can see that the MACD is currently bearish, but if SHIB manages to push beyond $0.000025, we could see it flip to bullish.

More On Shiba Inu: Could Shiba Be A Millionaire-Maker Coin?

The Shiba Inu price chart shows that SHIB has made a fairly strong increase during the current session. If the bullish sentiment persists, we could see SHIB push towards $0.000025. However, if sellers can push the price down, we could see SHIB drop below $0.000023.

Is Shiba Inu Crypto A Buy?

Why Shiba Inu Is Going To Explode