Shiba Inu Price Prediction: SHIB Recovers After Dropping To A Low Of $0.000020

The Shiba Inu price remained in the red during the ongoing session, as bearish sentiment pushed the price down considerably. SHIB had started the week in the red, dropping by almost 6% on Monday. SHIB managed to recover on Tuesday, rising by 3.74% and moving to $0.000024, before dropping back in the red on Wednesday, falling by 0.36%. The current session sees SHIB at $0.000022 as the price looks to push higher.

The Shiba Inu price had started the previous week in the red, dropping by almost 2% on Monday. SHIB recovered on Tuesday, rising by almost 6% and moving to $0.000031. However, Wednesday saw SHIB back in the red, dropping by 1.02%, before crashing on Thursday, falling by nearly 9% and settling at $0.000028. SHIB remained in the red on Friday as well, registering a marginal drop of $0.35%.

The Shiba Inu price remained bearish over the weekend, dropping by 2.17% on Saturday and settling at $0.000027. Sunday saw SHIB register a significant drop, falling by over 7%, slipping below the 20, 200, and 50-bar SMAs and settling at $0.000025. The bearish sentiment persisted on Monday, as SHIB dropped almost 6% before recovering on Tuesday, rising by almost 4% and moving to $0.000024. SHIB registered a marginal drop on Wednesday before falling drastically during the ongoing session, with the price down by nearly 10%.

Looking at IntoTheBlock’s IOMAP for the Shiba Inu price chart, we can see that SHIB faces strong resistance at around $0.000024. At this price level, over 3.6k addresses have sold more than 51t SHIB.

More On Shiba Inu: Is Shiba Inu Crypto A Buy?

We can see that the MACD is currently bearish, but if SHIB continues to push higher, we could see it flip to bullish. 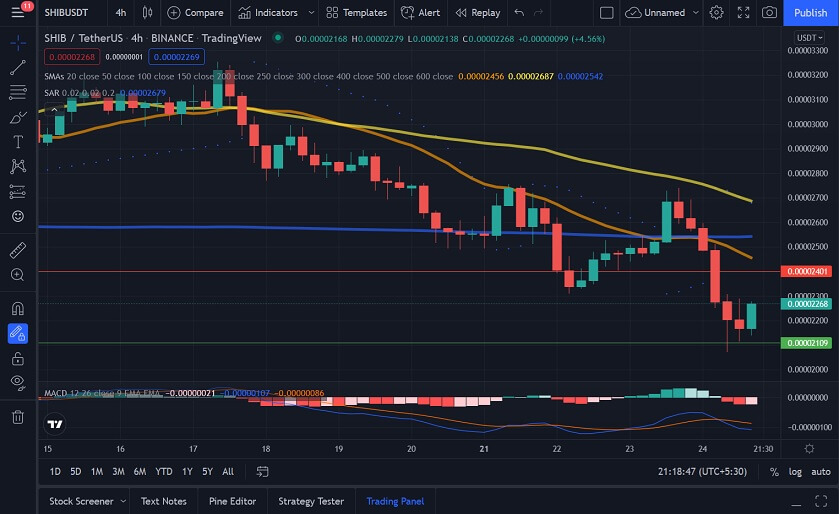 Looking at the Shiba Inu price chart, we can see that SHIB has been extremely bearish during the ongoing session, hitting an intraday low of $0.000020. However, the price has since managed to gain some ground and push to $0.000022, although it remains in the red. If SHIB can recover, we could see it move towards $0.000025. However, if the price continues to drop, SHIB could drop back towards $0.000020.

Is It Better To Invest Or Trade Shiba Inu?