The Shiba Inu price has made a strong recovery during the ongoing session, as buyers pushed the price up considerably during the ongoing session. SHIB had ended the weekend on an extremely bullish note, surging by over 26% and settling at $0.000028. Monday saw SHIB continue to push higher, as the price rose to $0.000032, before dropping back on Tuesday and falling to $0.000030. The current session sees SHIB at $0.000033, with buyers looking to push the price higher. 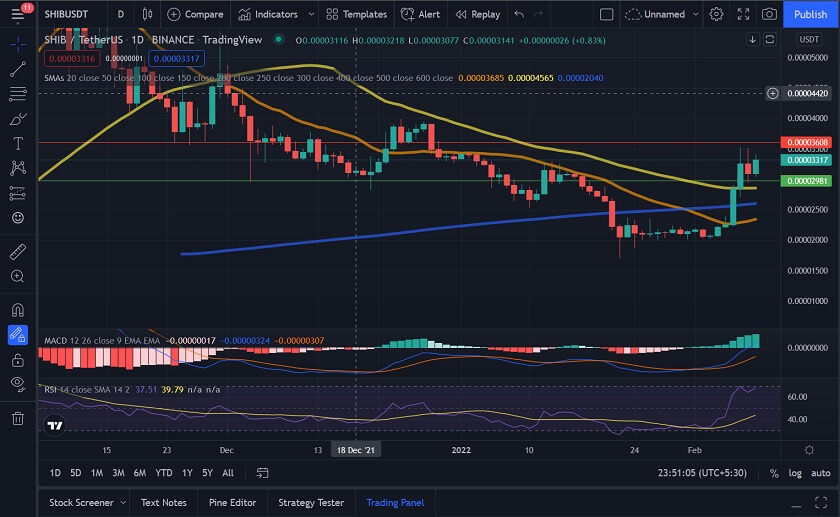 We can see that the SHIB could push above the neutral zone as indicated by the RSI. If it does happen, we could see SHIB register a drop.

Looking at IntoTheBlock’s IOMAP for the Shiba Inu price, we can see that SHIB faces strong resistance at around $0.000036. At this price level, over 43,000 addresses have sold more than 42.9t SHIB.

We can see that the MACD has turned bearish, indicating that we could see the price drop. 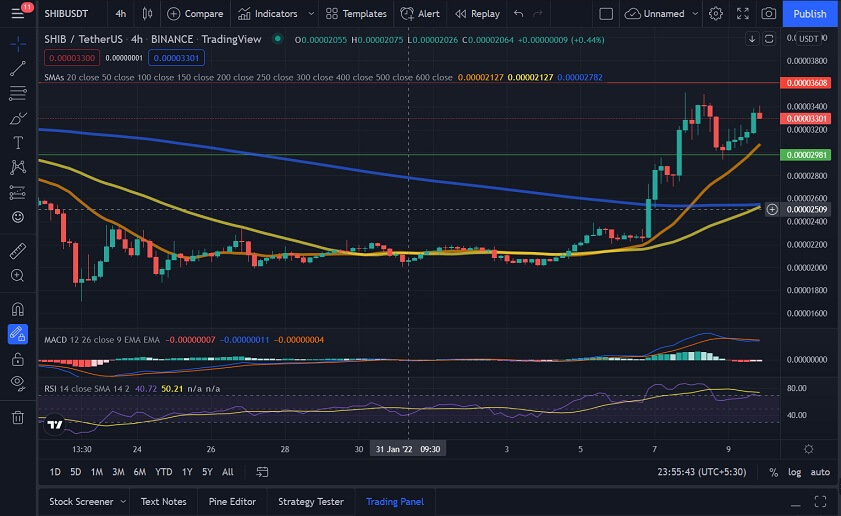 Shiba Inu developers have stepped up their metaverse game by announcing a new project called Shiba Lands. It will allow purchasing digital real estate that will become available for sale “really soon.”

The holders of Doge Killer (LEASH), the native token of the ShibaSwap decentralized exchange, will be granted to the first selling phase in accordance with a queue system created by the developers. The rest of the land will unlock shortly after the initial sale.

As reported by U.Today, developers recently announced the cryptocurrency’s entry into the metaverse space. It will allow users to immerse themselves into a virtual world, which will combine various elements of the Shiba Inu ecosystem.

The coin’s metaverse has been tentatively called “Shibverse.” Its actual name is expected to be revealed this month by the team. The Shiba Inu team has also teased new partnerships in a recent blog post:

"Finally, we have already been negotiating and meeting with some TOP partnershibs about this project. All for this exciting new environment to be welcomed with great energy and the way it's intended to."

Metaverse-related tokens went on a massive rally in early November after tech giant Facebook rebranded to Meta. MANA, the native token of Ethereum-based virtual reality platform Decentraland, went through the roof with other metaverse-related projects.

Rapper Snoop Dogg announced a partnership with The Sandbox, another prominent metaverse platform, and someone shelled out $450,000 to be the star’s neighbor in the virtual world.

Following Facebook’s lead, other major companies, such as Adidas, Walmart, and YouTube, are also exploring the metaverse, which is shaping up to be the hottest new trend in tech.

Looking at the Shiba Inu price chart, we see that SHIB has been extremely bullish in recent sessions and is up by over 6% during the current session. If sellers retain the session, we could see SHIB push to $0.000035. However, if sellers can push the price down, SHIB could drop below $0.000030.