The Shiba Inu price continued its upward trajectory, as it looks to push to $0.000034. SHIB had started the week on an extremely bullish note, rising by over 14% on Monday, moving above the 50-day SMA, and settling at $0.000032. The price fell back on Tuesday, dropping by nearly 5%, before making a relatively strong recovery on Wednesday, rising by over 6% and moving to $0.000032. The current session sees SHIB at $0.000033, as buyers look to push the price higher.

The Shiba Inu price started the previous week on a fairly bullish note, rising by 1.52% on Monday and then pushing up by 1.21% on Tuesday. However, the price fell back on Wednesday, dropping by almost 5% and falling to $0.000020, before registering a marginal increase on Thursday, rising by 0.68%. SHIB continued to push higher on Friday, as the price rose by nearly 7%, rising to $0.000022. 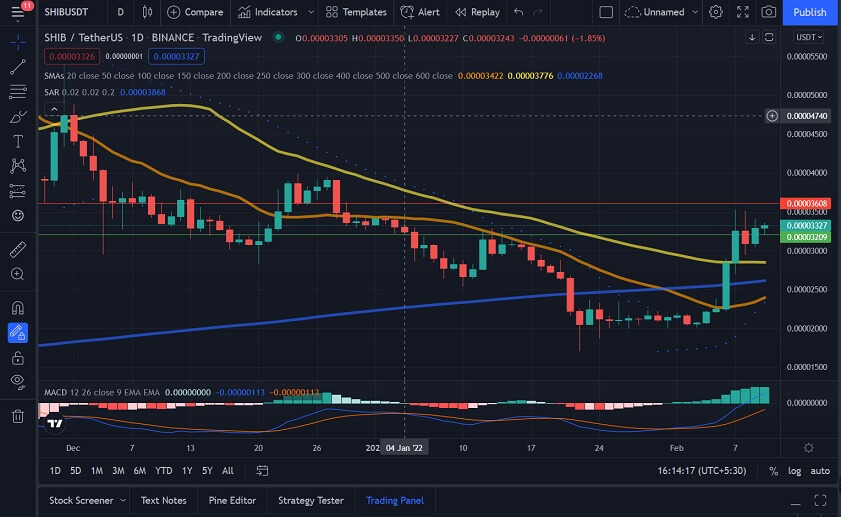 Looking at IntoTheBlock’s IOMAP for the Shiba Inu price, we can see that SHIB faces strong resistance at around $0.000036. At this price level, over 46,000 addresses have sold more than 42t SHIB.

We can see that the MACD and Parabolic SAR are bearish, but if SHIB can push higher, we could see them flip to bullish. 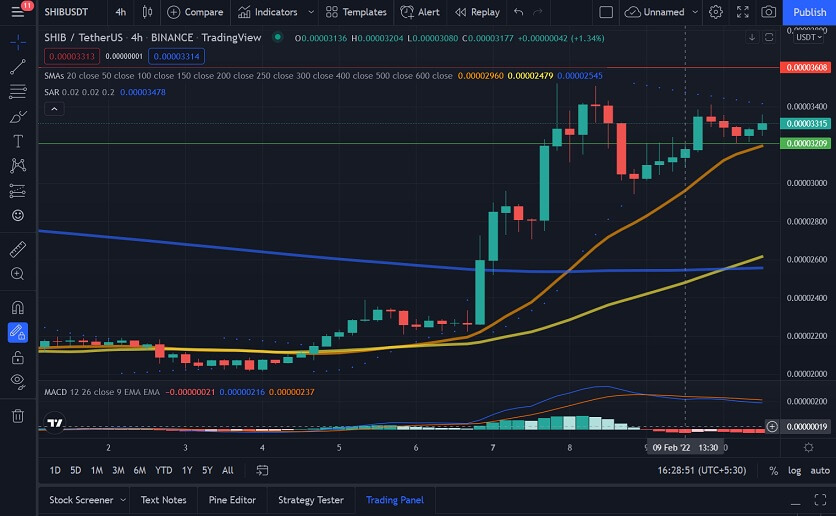 46.7 Million SHIB Burned in Over 24 Hours, While Burn Pot of This Company Rises to 191 Million Tokens

In its recent tweet, Shibburn Twitter account noted that over 24 hours, approximately 45 million coins have been removed from the initial SHIB emission. In the following hours, another 1.8 million tokens followed. Meanwhile, the SHIB burn pot of this company keeps growing, so far exceeding 191 million Shiba Inu, to be destroyed live on YouTube on Feb. 14.

Data shared by the Shibburn account shows that the SHIB community destroyed a total of 44,938,070 meme tokens by sending them to a dead wallet and thus removing them from circulation. That amount of crypto was shifted in 17 transactions.

Later on, within a few hours, another 1,883,210 SHIB were burned within two transfers, according to the same source on Twitter that duplicates information provided by Etherscan, publishing it on its recently created website.

The amount of SHIB to be burned at that event constitutes around 191,005,600 tokens. This amount grows gradually as people listen to playlists on the company's website, play games, and contribute by purchasing a burn party subscription for $5.

According to the recent tweet by the company's owner, Steven Cooper, the firm needs to raise another $6,000 to make the coming burn party the biggest they have had yet. At the previous burn event on Dec. 26, the company sent slightly over 239.6 million SHIB to a dead wallet. Overall, the firm has already burned nearly one billion tokens after beginning to help burn SHIB in late October.