The Shiba Inu price has registered a marginal drop during the ongoing session, with SHIB unable to push past the 20-day SMA. SHIB had slipped below the 20-day SMA on Wednesday, when the price dropped by nearly 4%, falling to $0.000033. The price registered a marginal recovery on Thursday before falling by 1.13% on Friday. Saturday saw SHIB rise by over 2%, rising to $0.000034, but was unable to move past the 20-day SMA and dropped back during the ongoing session.

The Shiba Inu price started the previous weekend on a bearish note, dropping by over 6% on Friday. SHIB pushed higher from this level, rising by over 4% on Saturday, settling at $0.000037, and then moving to $0.000038 on Sunday. The week started in the same vein, with SHIB rising over 2% on Monday before registering a drastic fall of over 10% on Tuesday, dropping to $0.000033. 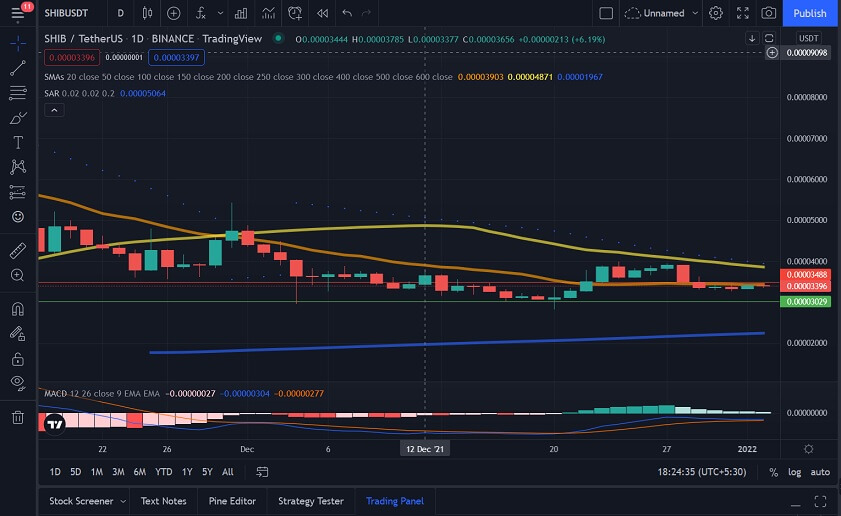 After dropping by over 10% on Tuesday, the Shiba Inu price continued to drop on Wednesday, slipping below the 20-day SMA and settling at $0.000033. The price registered a marginal increase on Thursday but fell back in the red on Friday, registering a drop of 1.13%. Saturday saw SHIB rise by over 2%, moving to $0.000034, but fell back during the current session, with SHIB unable to move past the 20-day SMA.

IntoTheBlock’s IOMAP for the Shiba Inu price shows us that SHIB faces strong resistance at around $0.000034. At this price level, 22,000 addresses have sold more than 60,000 billion SHIB.

We can see that the MACD is currently bullish, indicating that SHIB could push higher. However, if the price drops, we could see the MACD flip to bearish. 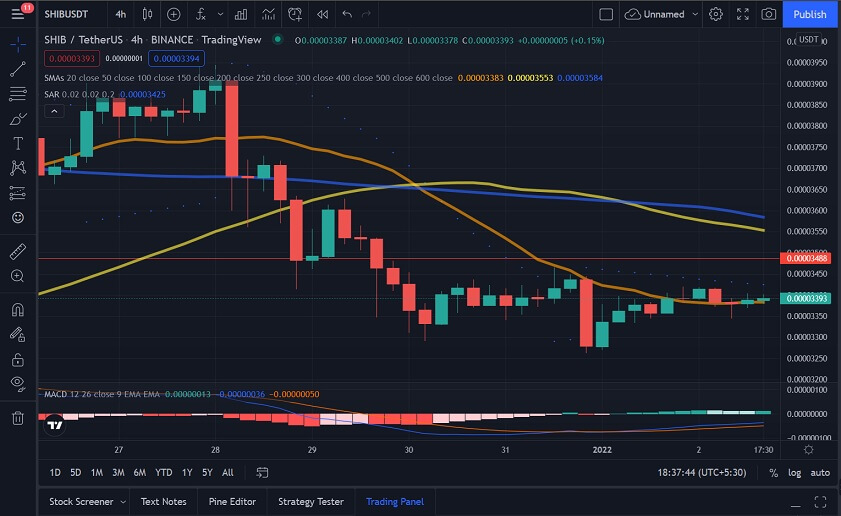 125 Million SHIB Burned In Past 5 Days

According to Etherscan, approximately fourteen transactions have been made to send a total of over 125 million SHIB tokens to a dead wallet from which nobody will ever be able to withdraw or spend them. The largest one carried 100,000,000 million SHIB, and it took place last week.

Recently, over twenty-four hours, 5.6 million tokens have been burned via six transfers, according to Twitter user @shibburn. The user reminded that out of the initial supply of 1 quadrillion, 410,300,521,864,319 SHIB has been taken out of circulation so far.

Per previous reports, the non-custodial platform NOWPayments processes crypto payments. It plans to add a feature through which merchants can burn SHIB tokens.

According to senior currency strategist at IG Group subsidiary DailyFX, Christopher Vecchio, the 2022 year that has just begun is unlikely to be fortunate for meme cryptocurrencies, such as Dogecoin and its rival Shiba Inu.

In particular, as he put it, he would be very surprised to see these two coins rally and assumed that only Elon Musk would be able to save them by tweeting about these cryptocurrencies. Vecchio reckons that Doge, SHIB, and other meme coins will drop “deeper and deeper.” He is also bearish on Bitcoin, though, stating that the flagship crypto is facing “a crisis of faith” at the moment.

Looking at the Shiba Inu price chart, we see that SHIB faces strong resistance at around $0.000034. If the price is unable to move past this level and sellers retain control, we could see SHIB drop below $0.000030. However, if SHIB can break past the resistance, we could expect it to push to $0.000035.