The Shiba Inu price continued to remain bearish during the ongoing session, as sellers retained control. SHIB had started the week on a reasonably bullish note, rising by over 15% on Monday and settling at $0.000045. On Tuesday, the price continued to push up as SHIB moved above the 20 and 50-day SMAs and settled at $0.000047. However, the price dropped on Wednesday as sellers took control and pushed SHIB back below the 20 and 50-day SMAs to $0.000044. 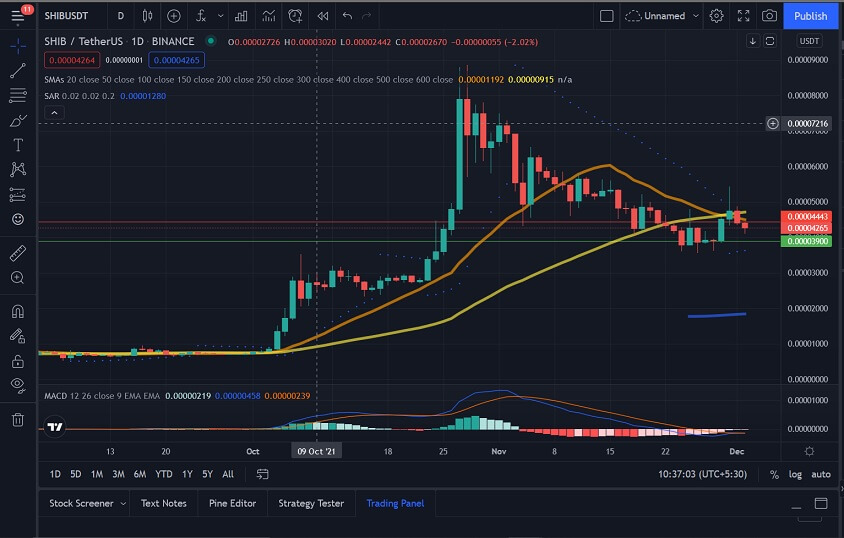 After dropping by over 9% on Friday, the Shiba Inu price pushed up marginally on Saturday before registering a marginal drop on Sunday to end the weekend at $0.000039. However, the current week started on an extremely bullish note for SHIB, as it pushed up by over 15% on Monday, rising to $0.000045. SHIB continued to push higher on Tuesday, rising above the 20 and 50-day SMAs and settling at $0.000047 before dropping back on Wednesday and dropping to $0.000044. The current session sees DOGE at $0.000042, as sellers look to push the price lower.

We can see that the Parabolic SAR is currently bullish, indicating that we could see the price push higher. However, if the price continues to drop, then we could see it flip back to bearish.

Looking at IntoTheBlock’s IOMAP for the Shiba Inu price, we can see that SHIB faces strong resistance at around $0.000045. At this price level, over 12,000 addresses have sold more than 17,049 billion SHIB. 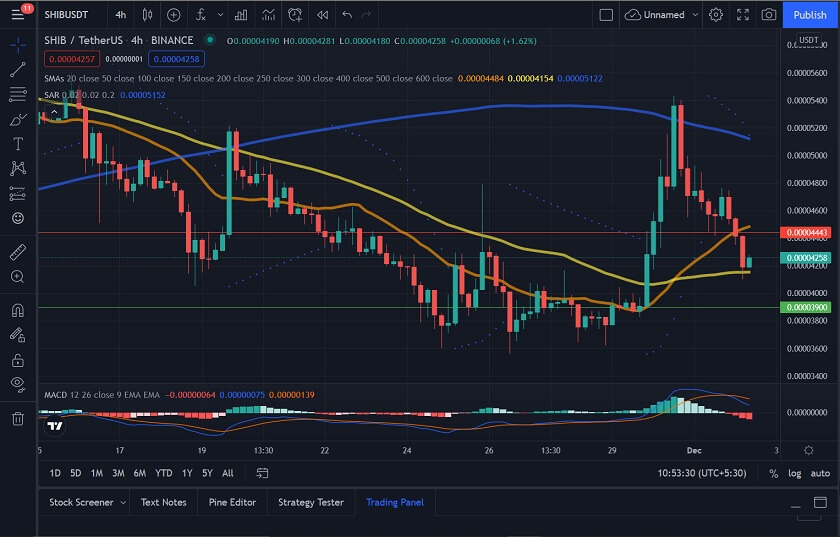 Crypto whales seem to be accumulating billions of Shiba Inu tokens. The news comes after SHIB adoption grew thanks to a listing on cryptocurrency exchange Kraken, its entrance in the world of gaming, and Nasdaq-listed retailer Newegg adding SHIB as a payment method.

Data from tracking platform WhaleStats has shown that the top 100 Ethereum wallets holding the meme-inspired cryptocurrency saw their balance in it rise by over 40% in 24 hours to over 2.5 billion tokens.

Whales started accumulating more SHIB after Kraken finally announced it was listing the cryptocurrency after teasing its community earlier this month, effectively boosting its liquidity. Similarly, Newegg adding SHIB as a payment method gives holders more options of what to do with the token.

However, a more significant catalyst may have been Shiba Inu’s team bringing in gaming industry veteran William Volk to help guide the organization’s move into the gaming industry. The project’s pseudonymous lead, Shytoshi Kusama, said that the team has a new games division, Shiba Inu Games, which hired Volk to lead the design and implementation of a new game being developed by a “AAA Game Studio.”

Volk indicated on his LinkedIn page that he has been working on a freelance basis for Shiba Inu Games since the start of the month, said he is “honored to be working with an amazing team on what will become one of the most significant games of all time.”

Looking at the Shiba Inu price chart, we see that SHIB has seen a considerable fall during the ongoing session. If the current sentiment persists, we could see the price drop to $0.000040.