The Shiba Inu price remained in the red as the bearish week continued. SHIB is currently down by almost 4% during the session. The price had fallen by over 7% on Sunday as SHIB ended the weekend on a bearish note. SHIB continued to drop on Monday as the price slipped below the 50-day SMA, dropping to $0.000043. Tuesday saw SHIB continue to drop, falling by over 3% and settling at $0.000041.

The Shiba Inu price started the previous weekend in the red, as the price dropped marginally on Saturday (13th). Sunday saw the price recover, as it rose by almost 3% and settled at $0.000053. On Monday, the positive sentiment persisted as SHIB posted a marginal increase before dropping by almost 10% on Tuesday and settling at $0.000048. Wednesday saw SHIB remain in the red, registering a marginal drop before another significant fall of over 11% on Thursday saw the price drop to $0.000042. 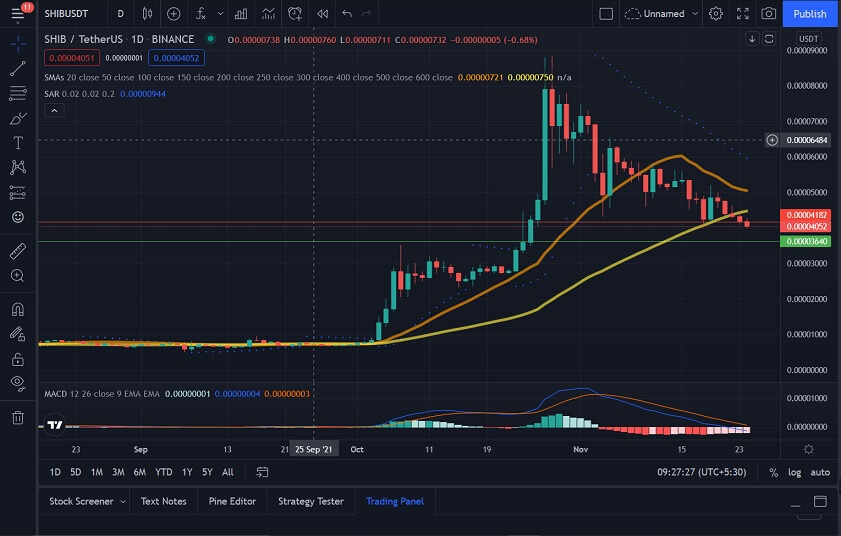 After Thursday’s significant drop, the Shiba Inu price posted a strong recovery on Friday, as the price pushed up by over 14% and settled at $0.000048. However, the price fell back over the weekend, as Saturday saw SHIB drop by 1.75%. SHIB remained bearish on Sunday, dropping by over 7.45% and ending the weekend at $0.000044. Monday failed to see any significant recovery, as SHIB slipped below the 50-day SMA, with the price dropping to $0.000041 on Tuesday. The current session sees SHIB still in the red as sellers look to push the price below $0.000040.

The Parabolic SAR is currently bearish, indicating that we could see the price drop during the current session.

Looking at IntoTheBlock’s IOMAP for the Shiba Inu price, we can see that SHIB faces strong resistance at around $0.000041. At this price level, over 7500 addresses have sold more than 7195 billion SHIB. SHIB also has strong support at around $0.000036. At this price level, more than 13,000 addresses have bought over 7328 billion SHIB.

The MACD is currently bearish, indicating that the price could continue to drop. 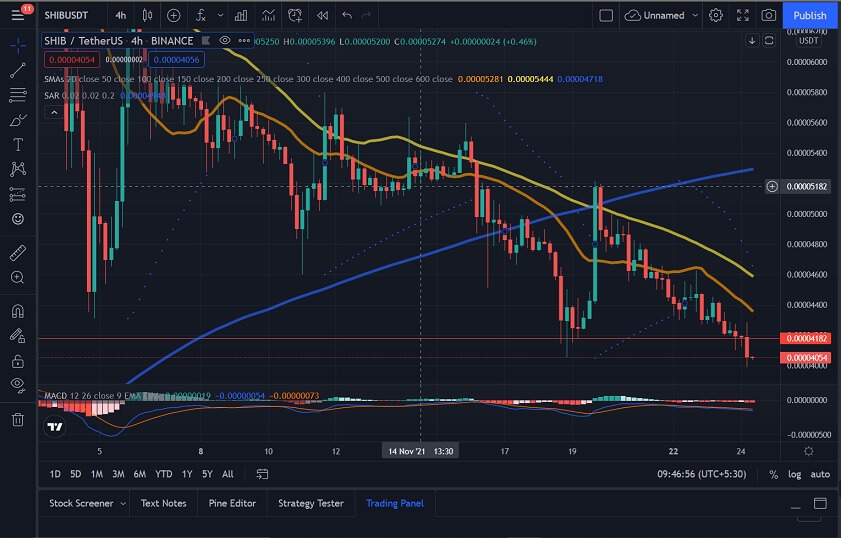 Meme crypto Shiba Inu is now just around 9,000 holders away from reaching 1 million unique addresses, according to the latest data from Etherscan.io. Only three weeks ago, after adding 80,000 new holders in less than a week.

Interestingly it was only on November 19 when the number of SHIB holders had briefly declined for the first time since October 8, 2021. The cumulative Erc-20 holdings of the 1,000 largest Ethereum wallets on the network have now hit 18% of Shiba Inu.

Previously, Shiba Inu coins accounted for more than 22% of all holdings on major wallets, meaning that number has decreased by around 4%, as per WhaleStats. Because the Shiba Inu has already had a strong rally season this year, investors are being presented with new opportunities.

The move could act as a reminder of the selling pressure applied by SHIB investors trying to cash out before the token falls. However, with new holders nearing 1 million and the likelihood that the token could be listed on Robinhood and Kraken, there may yet be another price rise remaining.

The Shiba Inu price chart shows us that SHIB is currently extremely bearish, with the price currently down by over 3%. If the current trend persists, we could see SHIB drop below $0.00040 and settle around $0.000036.