The Shiba Inu price moved to $0.000022 during the ongoing session, as SHIB continues to push higher over the weekend. The price had registered a marginal increase on Wednesday after a highly volatile session. The price remained in the green on Thursday, rising by 0.85%, before dropping back on Friday, registering a marginal drop of 0.28%. SHIB was able to recover over the weekend, registering an increase of over 2% on Saturday, moving to $0.000021, before pushing to $0.000020 during the ongoing session.

The Shiba Inu price was extremely bearish when it started the previous weekend, dropping by nearly 16% on Friday, slipping below the 200-day SMA and settling at $0.000022. The price continued to drop on Saturday, falling nearly 8% to $0.000020, before recovering on Sunday and rising by over 9%, ending the weekend on a positive note at $0.000022. However, SHIB fell back into the red on Monday, dropping by nearly 6% to $0.000021 and then registering another marginal drop on Tuesday, falling by 0.90%. 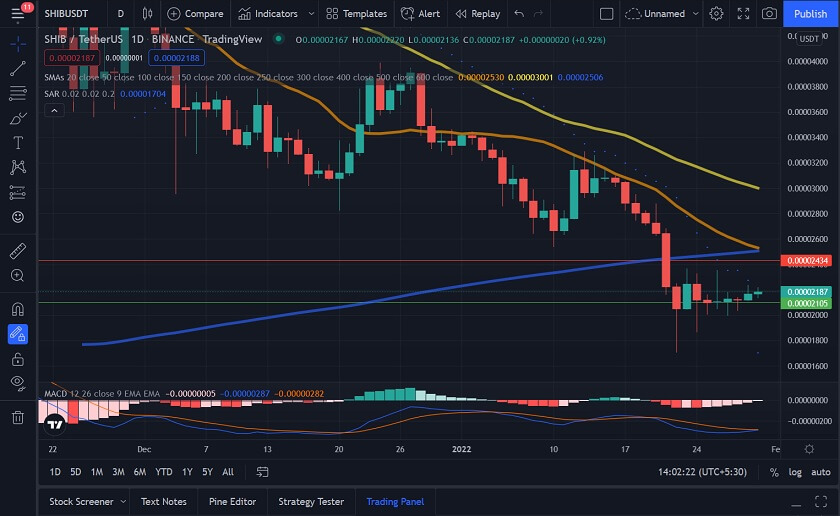 After Tuesday’s marginal drop, the Shiba Inu price was able to register a marginal increase on Wednesday after a highly volatile session. Thursday saw SHIB continue to push higher, as the price rose by 0.85%, before dropping back on Friday and falling by 0.28%. The weekend saw SHIB make a strong recovery on Saturday, rising by over 2% and moving to $0.000021. As buyers look to push the price higher, the current session sees SHIB shuttle between $0.000021 and $0.000022.

Looking at IntoTheBlock’s IOMAP for the Shiba Inu price, we can see that SHIB faces strong resistance at around $0.000024. At this price level, 1.43k addresses have sold more than 45 trillion SHIB.

We can see that although the price has dropped during the ongoing session, the Parabolic SAR and MACD are both bullish, indicating that we could see the price recover. 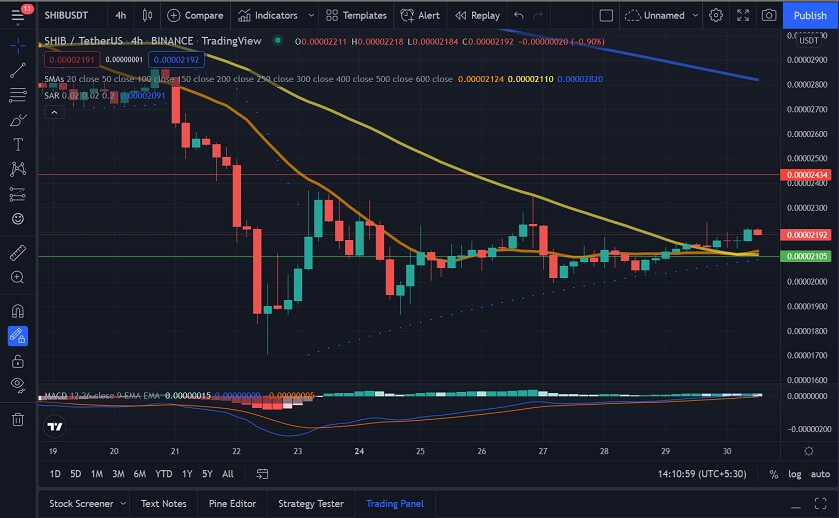 Sandeep Nailwal, the co-founder of Polygon (MATIC), recently revealed that India’s CryptoRelief would be sending 100 million USDC from Vitalik Buterin’s last year SHIB donation back to him.

Last year in May, Vitalik Buterin donated 50 trillion SHIB tokens to India Covid Relief Fund. Tweeting on the matter, Nailwal revealed the reasons why they decided to send $100 million of the donation back to Buterin.

He explained that being an Indian presents challenges and that he has “to be extra cautious in any of the projects being donated to.”

"Vitalik being a non-Indian can do it in a more accelerated way by being able to do faster decision-making and deploying to projects which have higher risk but high rewards too."

The fund still reserves 302 million USDC and has deployed 70 million so far with aims of “disbursing in areas of need in India as it is.”

Buterin also responded to the thread and revealed that he co-founded a new organization to direct these funds. He also left an address where anyone can follow the funds.

"CryptoRelief sending $100m of the $SHIBA funds back to me. I plan to personally deploy these funds with the help of science advisors to complement CryptoRelief's existing excellent work with some higher-risk higher-reward covid science and relief projects worldwide."

Looking at the Shiba Inu price chart, we can see that SHIB has registered a fairly strong increase over the past couple of sessions, although the price has dropped marginally to $0.000021 during the ongoing session. If the price continues to drop, we could see SHIB drop to $0.000020, but with the Parabolic SAR having flipped to bullish, we could see SHIB recover and push above $0.000022.