The Shiba Inu price is showing signs of recovery, as buyers managed to push the price up marginally. SHIB has been in the red since the start of the week, dropping to $0.000048 on Tuesday. On Wednesday, the price remained in the red, registering only a marginal drop, before falling by over 11% on Thursday and settling at $0.000042.

The Shiba Inu price started the previous week on a bearish note, as it registered a drop of over 3% on Monday. After registering a marginal drop, Tuesday saw SHIB drop below the 20-day SMA as it fell to $0.000054. The bearish trend continued on Wednesday, as the price dropped by over 8% and settled at $0.000050. However, the price made a strong recovery on Thursday, rising by over 12% and settling at $0.000056. However, the price fell back in the red on Friday, dropping by 7.41% and settling at $0.000052. 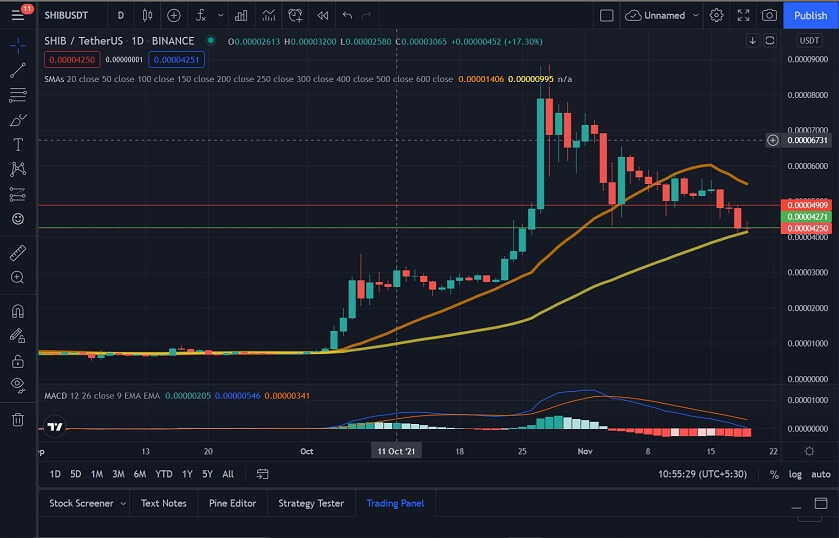 The Shiba Inu price started the weekend on a bearish note, as the price registered a marginal drop on Saturday. However, the price was back in the green on Sunday, as it rose to $0.000053, an increase of 2.83%. SHIB registered a marginal rise on Monday as well but fell back in the red on Tuesday, dropping by over 9% and settling at $0.000048. SHIB remained in the red on Wednesday, posting only a marginal drop before falling by almost 12% on Thursday and settling at $0.000042. The current session sees buyers and sellers both struggling for control.

Looking at the RSI, we can see that SHIB could fall below the neutral zone if the current trend continues and SHIB continues to drop. 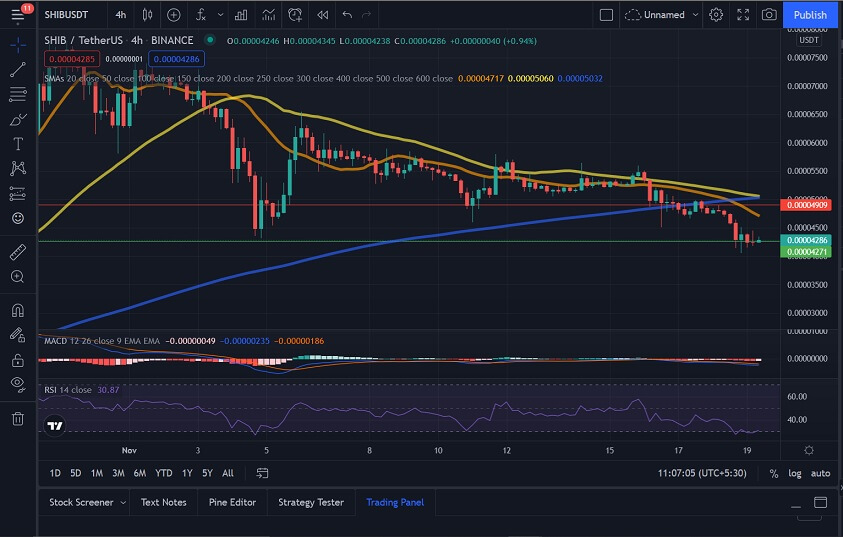 SHIB Is The Largest ERC-20 Holding Among Whales

New data has suggested that Shiba Inu (SHIB) is the largest ERC-20 token holding among the top 1,000 ETH whales. According to data compiled by WhaleStats looking at the Ethereum-based token holdings of the largest ETH wallets, SHIB represents 21.68% of the combined market share at $2.35 billion. The next highest asset in terms of holdings is Crypto.com’s native token, CRO, representing 5.54% at $603.9 million. 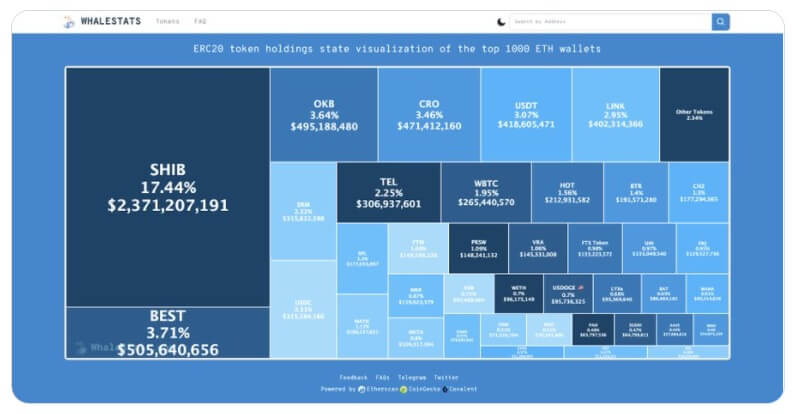 The SHIB community has been on a mission to push crypto trading platforms, such as Coinbase and Robinhood, to list the asset. Its Change.org petition aimed at convincing them had received more than 530,000 signatures at the time of writing. Coinbase Pro listed SHIB back in late September.

One popular brand that gave the idea of accepting SHIB for payments a decidedly cool reception is fast-food giant McDonald’s, which replied to a tweet from ShibArmy1365 calling on the firm to accept “SHIB for payment, please.”

In a blog post, CoinGate revealed over 500 merchants can now accept SHIB. Furthermore, Shiba’s integration into the CoinGate trading system enables users to buy SHIB at a 1% rate.

“It is our greatest joy to announce that Shiba Inu (SHIB) has been integrated as our newest cryptocurrency! Every CoinGate user, from merchants to traders or Gift Card shoppers, can now accept, buy, trade, or spend this sky-rocking meme coin on the things they want.”

The development will likely be a catalyst for a potential SHIB price surge, considering that the coin has come under scrutiny for lacking real-world use cases. Notably, in July, SHIB surged in value after the launch of its much-anticipated decentralized exchange (DEX), ShibaSwap, and the integration of the SHIB token on a retail Shopping.io platform.

Currently, the token is eying another all-time high despite the price action getting congested with each lower high, suggesting consolidation. Therefore, the coin will likely break out from the downtrend with a possible upswing.