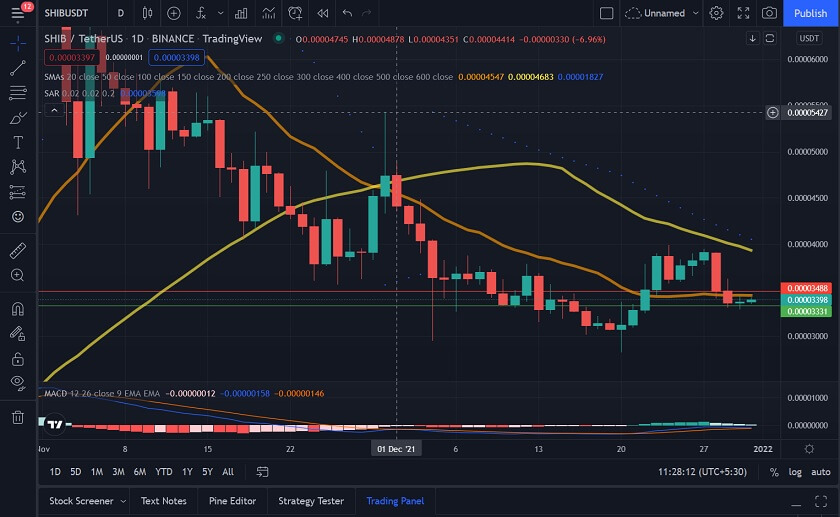 The Parabolic SAR is currently bearish, indicating that we could see the price drop if SHIB fails to push past the 20-day SMA.

Looking at IntoTheBlock’s IOMAP for the Shiba Inu price, we can see that SHIB faces strong resistance at around $0.000034. At this price level, over 22,000 addresses have sold more than 57,000 billion SHIB. 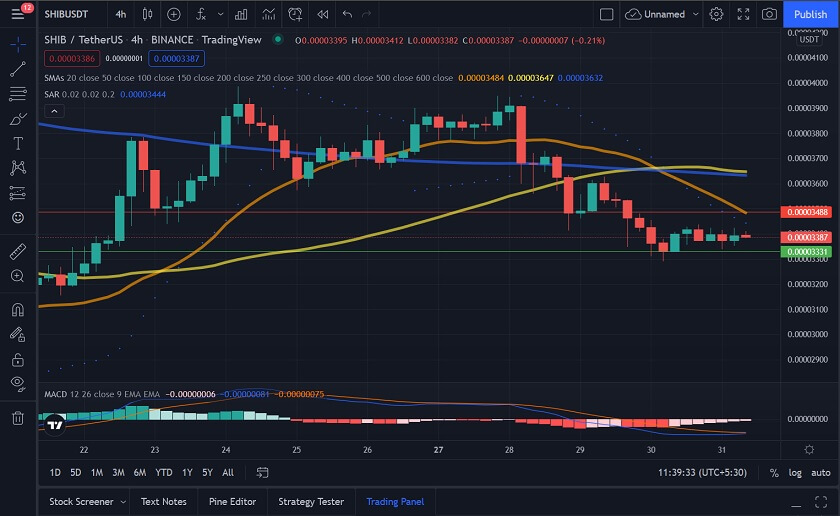 Another 2.5 Million SHIB Burned With Over 3 Billion SHIB Destroyed In December: Details

The owner of the Bigger Entertainment crypto label, Steven Cooper, recently announced that his project team has burned 2.5 million SHIB tokens, while 1.5 million SHIB are waiting to be taken out of circulation too.

"Another 2.5 Million #shib burned + 1.5 million in playlist additions. Bringing our total burned to 884,983,100 SHIB since launching our campaign on Oct. 20th. We still have some big announcements coming."

The head of the project has promised more big announcements about future SHIB burns to appear on his Twitter page soon. Per previous reports, December was "rich" in burned SHIB tokens. According to a tweet by a SHIB-dedicated Twitter user "SHIBtyme," the SHIB community has eliminated 1,943,391,652 tokens in the month.

Together with the aforementioned 242.5 million, 370.4 million SHIB were burned by the SHIB community on December 26-27, and 706 million were incinerated on December 23, according to the data provided by Etherscan. All of it together makes up another 1.3 billion.

According to WhaleStats data, Shiba Inu is the biggest token position by dollar value in the top 1,000 Ethereum wallets and the second-largest holding after ETH. Uniswap recently reclaimed the top spot as the most traded asset among Ethereum whales, or the 1,000 largest addresses on WhaleStats, overthrowing MATIC, which recently held the position.

In addition, UNI remains the most widely held token, which means that almost every large wallet holds at least one UNI coin. Despite this, MATIC remains among the top 10 holdings in whale-tier wallets on Ethereum, with the largest addresses with more than $100 million worth of tokens.

During an announcement-filled ask-me-anything session on Twitter Spaces, Queenie, a moderator of the official Shiba Inu Discord channel, teased a big surprise in 2022 without going into further details:

"We do have a big surprise when we enter 2022. So, that's going to be the last little tidbit that I drop."

Steven Cooper, CEO of Bigger Entertainment, shared the news that $100,000 in SHIB will be burned while building MixDraft, a blockchain music game. Bigger Entertainment, a crypto label fully committed to Shiba Inu's success and holding over 1 billion SHIB, shared its huge roadmap planned for 2022, with burn initiatives scheduled to happen every month.

Looking at the Shiba Inu price chart, we see that SHIB has registered a marginal increase during the ongoing session. If the current sentiment persists, we could see SHIB test the resistance at $0.000034. However, if sellers retake control, SHIB could slip below $0.000033.