Solana Price Analysis: SOL Looks To Push Back Above $90

The Solana price had started the previous weekend on a fairly positive note, registering an increase of 1.25% on Saturday and then registering a marginal increase on Sunday to end the weekend at $148.08. On Monday, SOL fell back in the red, falling by 5.51% and settling at $139.92, where the 200-day SMA was acting as support. As a result, SOL was able to register a marginal recovery on Tuesday, rising by 0.98%, before slipping below the 200-day SMA on Wednesday and dropping to $135.26. 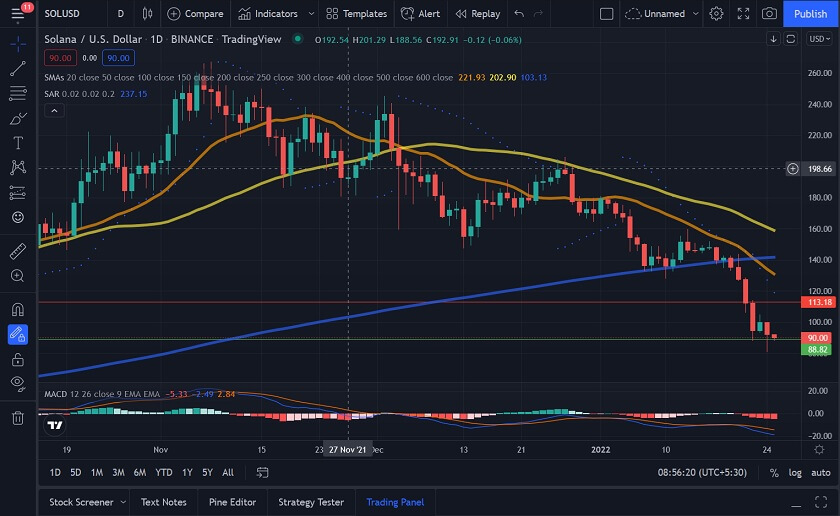 The Solana price continued to drop on Thursday, dropping by nearly 6% and falling to $127.59, and then registering a drop of nearly 12% on Friday to fall to $112.37. The weekend saw the bearish sentiment intensify, as the price dropped by nearly 16% on Saturday as sellers drove the price below $100 to $94.62. However, SOL registered a recovery on Sunday, rising by 5.53% and moving to $99.85. However, Monday saw SOL back in the red, dropping by nearly 8% to $92.10 and then slipping below $90 during the ongoing session. 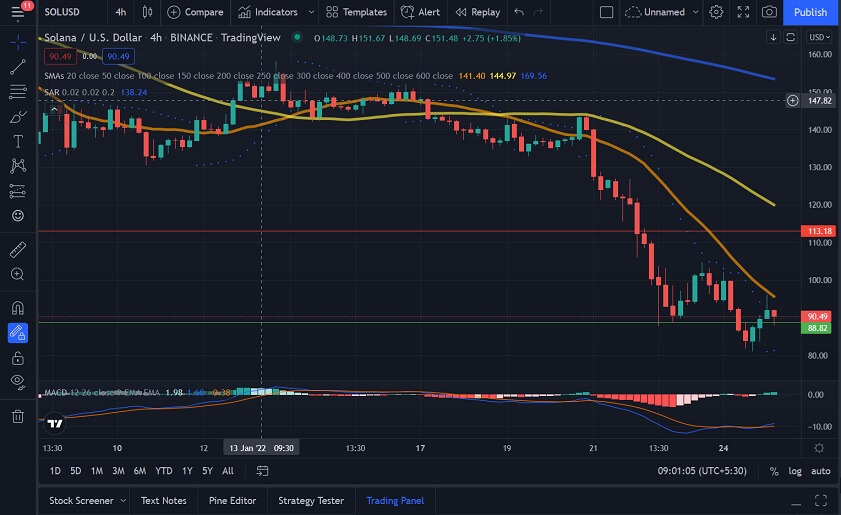 We can see that the MACD and Parabolic SAR have both flipped to bullish, indicating that we could see the price recover.

While the crypto market was bleeding heavily recently, Solana experienced another network hiccup that caused panic among traders and DeFi users across the crypto community. The Solana network has suffered multiple issues within the last few months, and this current incident is the second in January. But unlike other occasions, the latest outage lasted about 48 hours.

The Solana team said they first noticed the hiccup on Friday and wrote:

“The mainnet-beta cluster is experiencing some performance degradation, we are currently investigating the issue.”

The investigation lasted more than 24 hours before the team was able to identify the cause on Saturday at 17:55 UTC. According to the brief report on the Solana Status page, the issue was caused by “excessive duplicate transactions” done by bots.

The issue was resolved on Sunday after the release and adoption of v1.8.14, which was designed to “mitigate the worst effects of the issue.” The team added:

“These forthcoming releases are aimed at improving the state of the network, with more improvements expected to roll out in the next 8-12 weeks. Many of these features are currently live on Testnet, where they are being rigorously tested.”

HarperCollins’ author Mark Jeffery believes that Solana is already out of the winning blockchain of the future due to persistent network outages.

"Another day, another 48 hour #Solana outage. This is like the sixth time this has happened in 3 months. I have zero faith in it now. It is the new EOS. The fight is now between ETH, BSC, Fantom, Avalanche and Terra."

Looking at the Solana price, we can see that SOL is hovering between $89-$90 at the time of writing. If the current sentiment persists, we could see SOL push above and consolidate itself above $90.