The Solana price continued to drop during the ongoing session, hitting an intra-day low of $75 before pushing up to $81. SOL had started the week in the red, dropping over 8% on Monday and then recovering on Tuesday, pushing up to $86.47. However, SOL fell back in the red on Tuesday, falling by over 2% and settling at $84.58. The current session sees SOL at $81, as it looks to push back towards $85. 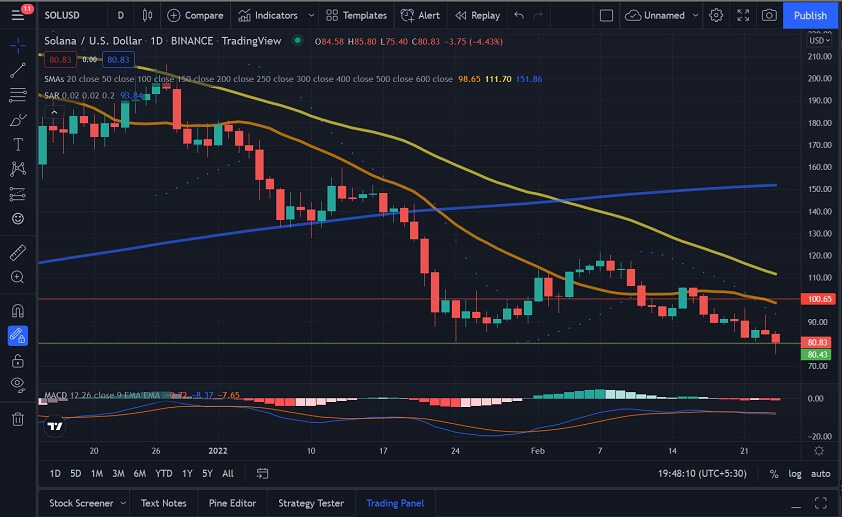 Despite the bearish sentiment, the Solana price recovered on Saturday, rising by 1.51% before dropping back on Sunday, registering a marginal drop and falling to $90.69. The bearish sentiment persisted on Monday, as SOL registered a drop of over 8%, falling to $83.04, before recovering on Tuesday, rising by 4.13% and settling at $86.47. On Wednesday, SOL fell back in the red, dropping to $84.58 and then dropping to $80 during the ongoing session.

More On Solana: Is It Worth Investing In Solana?

Per data from CryptoMiso, Solana had 800 GitHub commits since December, coming from over 100 contributors. Internet Computer, its closest rival clocked in at 731 commits from 72 contributors. Asides from the last three months, Solana also has the highest and most consistent developer activity of any Layer-1 blockchain.

The proof-of-history blockchain has had over 4,300 GitHub commits in its lifetime, as pointed out by Two Prime, an SEC Registered Investment Advisor (RIA). Solana was only surpassed by Trust Wallet Token (TWT), a layer 2 protocol, which has over 7,900 GitHub Commits from 95 contributors.

Similarly, the Solana ecosystem is showing increased on-chain activity. Going by data from ChainCrunch, unique users on Solana have increased 20x in one year. Solana also broke its all-time high unique signers with an 18% increase in January.

The data also shows that projects building on Solana, including Project Serum DEX, and Jupiter Aggregator, are seeing increased traffic. Added to this, Solana has sustained a significant increase in the number of active addresses.

The on-chain data and developer activity points to massive adoption. It has also been the basis by which a report by the Bank of America (BofA) gave Solana a vote of confidence as the “Visa of the digital assets ecosystem.”

Despite the massive adoption, the Solana blockchain has continued to face network challenges. It suffered multiple outages in a short time from last year and even into 2022. Solana suffered about six outages in January alone, with the last one lasting for over eight hours.

A Solana-based protocol has lured two major crypto investment firms in a seed funding round based on a vision of simplifying margin trading in DeFi. According to a recent press release, Multicoin Capital and Pantera Capital co-led the $3 million round in the Marginfi protocol, which also saw participation from Sino Global Capital and Solana Ventures.

Funding will be used to drive community and ecosystem development and launch the protocol into a development network (DevNet) while supporting institutions and partner integrations, per the release.

While still in its infancy, the protocol’s DevNet is slated to launch by the first quarter of this year to flesh out its interoperable cross-protocol offering.

Marginfi aims to bring “institutional-grade” margin trading for institutional partners and trading firms interacting within the Solana ecosystem. Trading margin refers to the act of borrowing money to buy financial assets. Traders using margin attempt to take on leverage and gain exposure to assets in a more capital-efficient way.

Marginfi is expected to develop its protocol to make it easier for traders, trading margin, to manage open positions across different DeFi (decentralized finance) protocols via a single dashboard. Edgar Pavlovsky, the founder of Mrgn Labs — the core contributing team of Marginfi, said:

“In 2021, we saw an explosion of innovative financial products emerge across DeFi. The problem is the trading experience is now extremely fragmented across different protocols which destroys capital efficiency and prevents traders from combining their positions into one unified account.”

Marginfi will allow traders to interact with its cross-margining engine through an application programming interface to control multiple derivatives positions.

Looking at the Solana price chart, we can see that SOL had dropped considerably during the ongoing session but has clawed back and moved to $82, although the price still remains in the red. If SOL can push higher, we could see it push past $85, but if SOL continues to drop, we could see SOL drop below $80.

What Is Solana? Should You Invest In SOL And Where To Buy It?

How To Trade Solana (SOL): A Step-by-Step Guide

What Might Happen If You Invest $100 In Solana (SOL) Today?

Will Solana Make Me Rich In 10 Years