Solana Price Prediction: SOL Continues To Drop, Could Fall To $160

The Solana price remained firmly in the red as sellers pushed it down to $163. SOL could drop further if sellers retain control of the session. SOL had ended the weekend on a bearish note, dropping by 1.52% on Sunday. The price continued to drop on Monday, falling by nearly 4% and settling at $170.03. Tuesday saw SOL remain bearish, dropping by 1.36%, before slipping below $165 during the ongoing session and moving to its current level of $163.

The Solana price started the previous week on a bearish note, dropping by 1.11% on Monday. Tuesday saw SOL continue to drop, as it registered a significant fall of over 9%, slipping below the 20-day SMA and settling at $177.33. On Wednesday, the bearish sentiment persisted, falling by nearly 4% and settling at $170.77. Despite the extremely bearish start to the week, SOL managed to register a recovery on Thursday, rising by 1%, before falling back in the red on Friday and dropping below $170 and settling at $169.97. 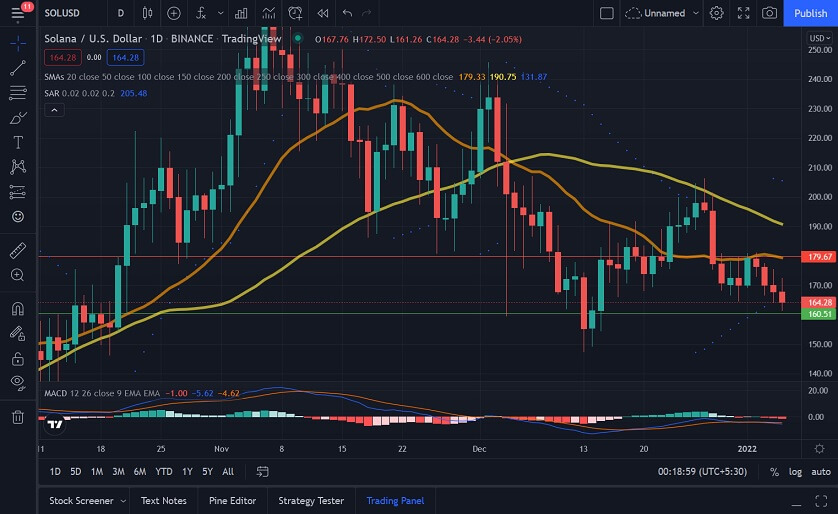 After dropping to $169 on Friday, the Solana price registered a sharp recovery on Saturday, rising by over 5% and settling at $179.21. However, with the 20-day SMA acting as resistance, the price fell back on Sunday, dropping to $176.48. SOL continued to drop on Monday, starting the week on a bearish note, and dropping to $170.03, a drop of nearly 4%. SOL continued to drop on Tuesday, falling by 1.36%, and then slipped below $165 during the current session, with the price currently at $164. 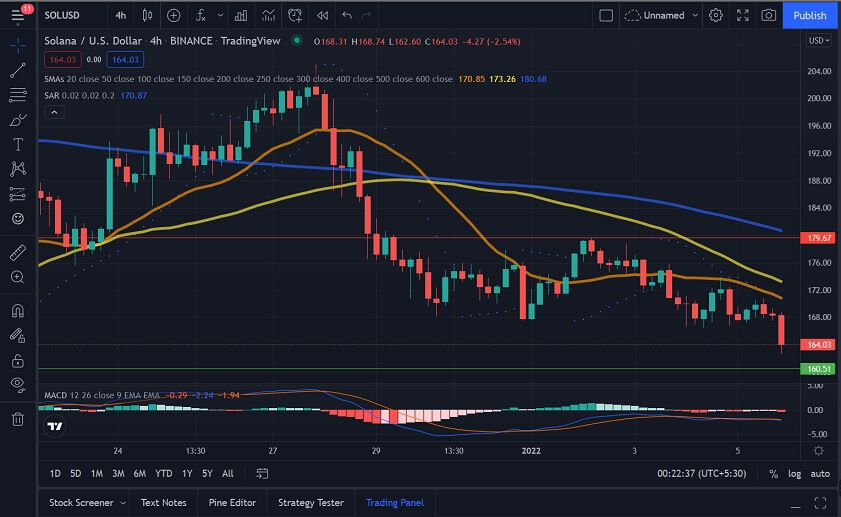 The Solana blockchain has suffered a third incident in just a few months that clogged the network and caused transactions to fail, with users debating whether it was caused by another distributed denial-of-service (DDoS) attack or if it was just network issues.

The scale and nature of the incident are hard to ascertain. Coinbase, Wu Blockchain, and Redditors reported an incident causing the network to slow and transactions to fail. However, Solana Labs co-founder Anatoly Yakovenko denied a DDoS on this occasion.

The incident comes less than a month after a previous attack that saw reports the network was clogged with mass botting due to another initial DEX offering on Solana-based decentralized exchange platform Radium.

According to Wu Blockchain, the Solana network went down for around four hours earlier this week due to an apparent DDoS attack. Solana.Status shows the network was fully operational with 100% uptime over that period.

A post on the r/CryptoCurrency group on Reddit also shared several screenshots of Solana users reporting issues with failed SOL transactions around the time of the potential DDoS and network downtime. Coinbase also provided an incident report on the Solana network’s “degraded performance” that resulted in failed withdrawals of SOL on the crypto exchange.

In an earlier interview with Cointelegraph, Austin Federa, head of communications at Solana Labs, said that developers are currently working to address the network’s issues, specifically in relation to improving transaction metering.

Looking at the Solana price chart, we can see that SOL has been extremely bearish during the current week. If the current sentiment persists, we could see SOL drop to $160.