The Solana price has surged by nearly 7% during the ongoing session, as buyers drove the price significantly higher, with SOL pushing past the $100 level. SOL had ended the weekend on a fairly positive note, registering an increase of 5.53% and settling at $99.85. However, Monday saw SOL back in the red, as it dropped by nearly 8% to $92.10, before recovering on Tuesday and moving to $94.75. The current session sees SOL surging past $100 as the price continues to move higher.

The Solana price had started the previous week on a bearish note, registering a drop of 5.51% on Monday and falling to $139.92. The 200-day SMA was acting as support at this level, and SOL managed to register a marginal recovery of 0.98% on Tuesday. However, Wednesday saw SOL back in the red, as it slipped below the 200-day SMA and settled at $135.26. SOL continued to drop on Thursday, registering a drop of nearly 6%, and then fell by nearly 12% on Friday, dropping to $112.37. 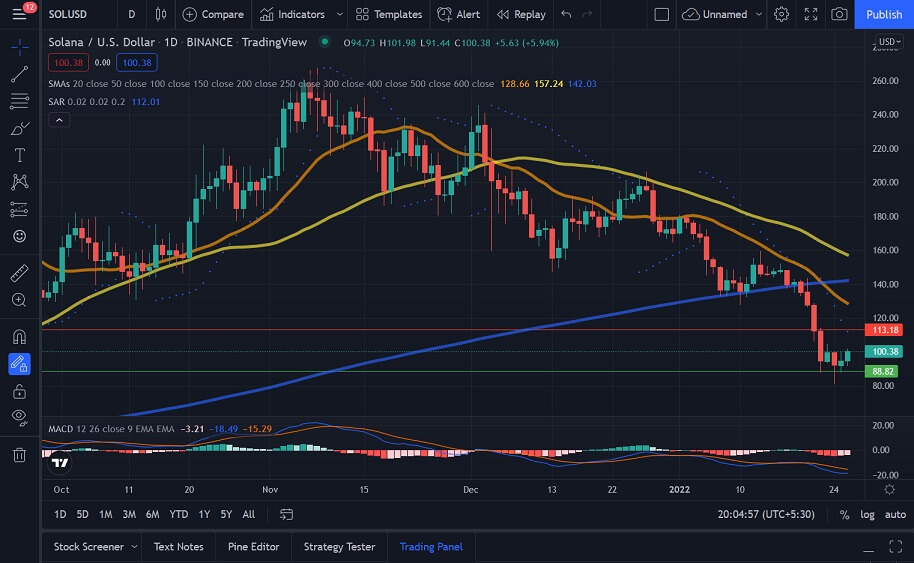 The Solana price registered another heavy drop on Saturday, as it started the weekend with the bearish sentiment prevailing. SOL dropped by nearly 16% on Saturday, slipping below the $100 level and settling at $94.62. Despite the bearish sentiment, SOL registered a significant increase on Sunday, rising by 5.53% and settling at $99.85. Monday saw SOL back in the red, as it dropped by nearly 8% to $92.10 before rising by nearly 3% on Tuesday and moving to $94.75. The current session sees SOL above $100 as buyers look to push the price higher.

We can see that the MACD is currently bearish, but if SOL continues to push higher, we could see it flip to bullish. 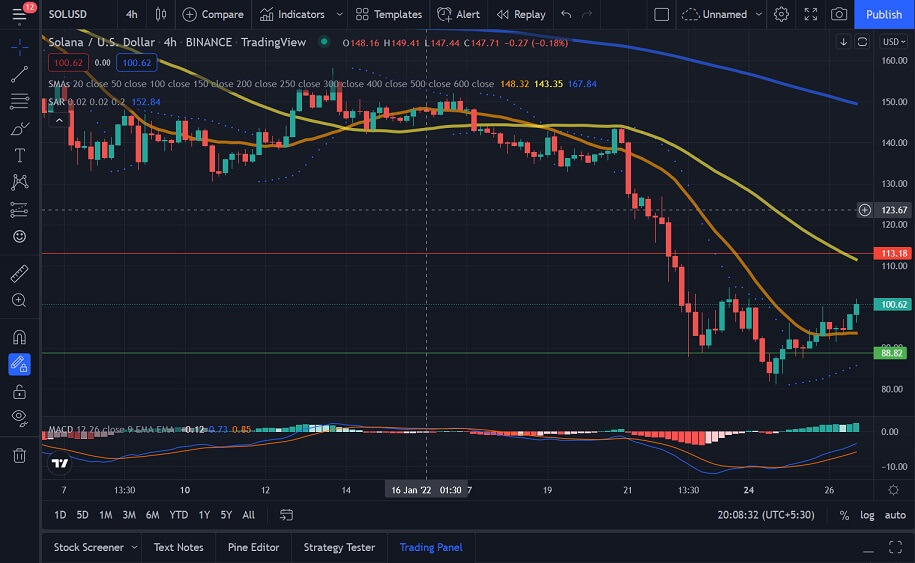 FTX’s Sam Bankman-Fried: Solana Is Better Than Other Blockchains Despite Multiple Outages

Despite the multiple outages that the Solana network suffered in recent months, FTX CEO Sam Bankman-Fried (SBF) believes the high-performance blockchain is still better than other networks in the industry.

According to Solana’s team, the incident resulted from “excessive duplicate transactions” from bots, which caused the network to experience high levels of congestion.

The recent outage sparked criticism from industry experts and users. While many questioned Solana’s reliability and status as a “Wall Street darling,” some think it is no longer part of the blockchain race for the future.

As the community shared their opinions on the issue, Bankman-Fried tweeted that despite the network’s recent shortcomings, it is still superior to other chains. According to the FTX boss, Solana has been able to process more transactions than all other major networks combined.

He pointed out that although the number of transactions per second (TPS) processed by the Solana network has significantly declined, it is still doing a lot compared to other blockchains.

However, Bankman-Fried admitted that there is still a lot of room for improvements.

“There’s always more work to do. And the most important thing is doing that work, building… Solana is mostly out of slack–the demand from transactions has reached the supply. So, you keep working to increase the throughput of the system, and the efficiency, to scale with the demand.”

The Solana price chart shows us that SOL has made a very strong recovery during the ongoing session. If the current sentiment persists, we could see SOL push towards $115.