Solana Price Prediction: SOL Slips Below $100, Could Drop Towards $90

The Solana price continued to drop during the ongoing session, as sellers drove the price down significantly during the current session, with SOL currently at $95. SOL had started the week on a fairly positive note, registering an increase of nearly 7% on Monday and pushing to $99.59. On Tuesday, the price continued to push higher, surging by nearly 11% and moving to $110.08. The price fell back on Wednesday, dropping by over 7% and falling to $101.86, before dropping below $100 during the ongoing session.

The Solana price started the previous week in the red, dropping by nearly 8% on Monday. The price managed to recover on Tuesday, rising by almost 3% and moving to $94.75 before dropping back on Wednesday and falling to $92.19. The price continued to drop further on Thursday, slipping below $90 after registering a drop of nearly 3% and falling to $89.69. However, SOL recovered on Friday, rising by almost 2% and settling at $91.46. 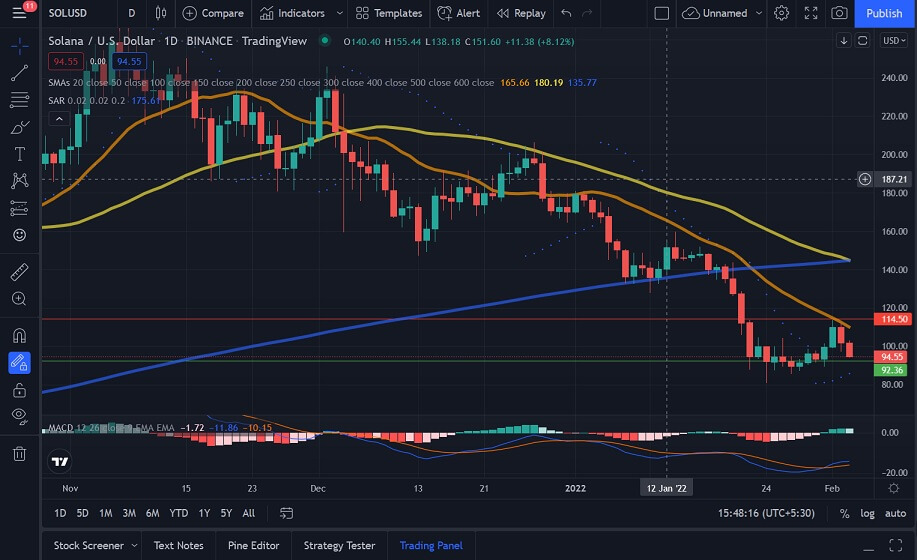 The Solana price continued to push higher over the weekend, as it registered an increase of over 5% on Saturday and moved to $96.17. The price fell back on Sunday, as SOL dropped by nearly 3% and settled at $93.40. Monday saw SOL register a significant increase rising by nearly 7% and moving to $99.59, and then surging by almost 11% on Tuesday and moving to $110.08. The 20-bar SMA came into play as resistance at this level, and the price fell back, dropping to $101.86 on Wednesday and slipping below the $100 level during the ongoing session. 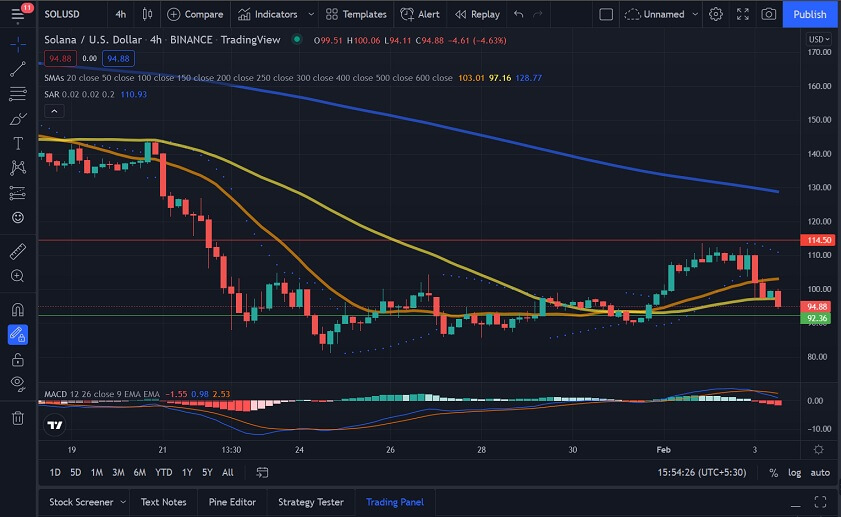 We can see that the MACD and Parabolic SAR are currently bearish, indicating that we could see the price drop further.

A bridge linking the Ethereum and Solana blockchains recently lost more than $320 million in an apparent hack. It is DeFi’s second-biggest exploit ever, just after the $600 million Poly Network crypto heist. It is the largest attack to date on Solana, a rival to Ethereum that is increasingly gaining traction in the non-fungible token (NFT) and decentralized finance (DeFi) ecosystems.

Crypto holders often do not operate exclusively within one blockchain ecosystem, so developers have built cross-chain bridges to let users send cryptocurrency from one chain to another. Wormhole is a protocol that lets users move their tokens and NFTs between Solana and Ethereum.

Developers representing Wormhole confirmed the exploit on its Twitter account, saying that the network is “down for maintenance” while it looks into a “potential exploit.” An analysis from blockchain cybersecurity firm CertiK showed that the attacker’s profits thus far are at least $251 million worth of Ether, nearly $47 million in SOL, and more than $4 million in USDC, a stablecoin pegged to the price of the U.S. dollar.

Preliminary analysis from CertiK showed that the attacker exploited a vulnerability on the Solana side of the Wormhole bridge to create 120,000 wrapped ETH (wETH) tokens for themselves. Wrapped Ethereum tokens are pegged to the value of the original coin but are interoperable with other blockchains.

Before the exploit, the bridge held a 1:1 ratio of Ethereum to wrapped Ethereum on the Solana blockchain, “acting essentially as an escrow service,” according to CertiK. The report added:

Wormhole says that Ethereum will be added to the bridge “over the next hours” to ensure that its wrapped Ether tokens remain backed, but it is unclear where it’s getting the funds to do this.

The Solana price chart shows us that SOL has registered a considerable drop over the past couple of sessions. If the current sentiment persists, we could see SOL drop further towards $90. However, if SOL recovers, we could see it push back towards $100.