The Solana price has dropped during the ongoing session, with SOL unable to move beyond $180 during the ongoing session. SOL had dropped to $170.75 on Wednesday before recovering on Thursday and rising to $172.51. The price fell back on Friday, dropping by 1.47%, before making a solid recovery on Saturday. Saturday saw SOL rise by over 5%, moving to $179.21, where the 20-day SMA acted as support and drove the price down.

The Solana Price started the previous weekend fairly positively, with SOL registering a marginal increase on Friday. The price continued to push up over the weekend, rising by 1.36% on Saturday and then by 2.49% on Sunday, ending the weekend on a positive note at $197.88. However, Monday saw SOL back in the red, as the price dropped by 1.12%, falling to $195.66. The price continued to drop on Tuesday, falling by over 9%, slipping below the 20-day SMA, and settling at $177.23. 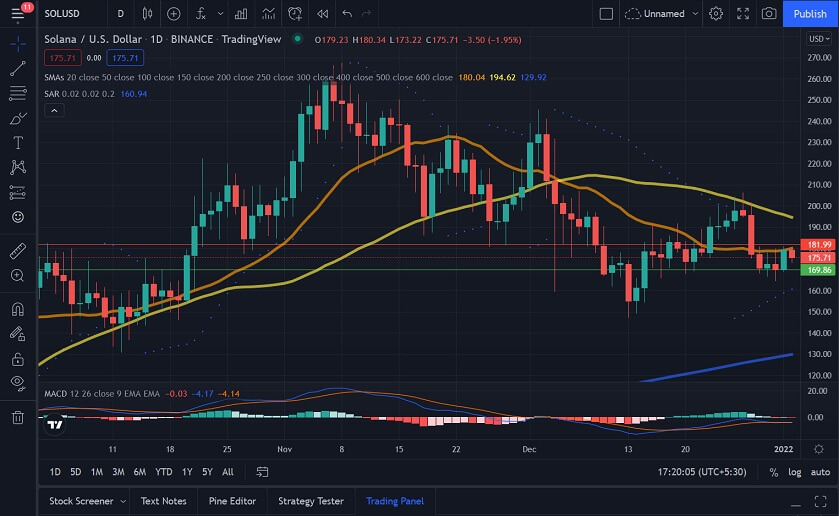 The MACD and Parabolic SAR are bullish, but if SOL continues to drop, we could see them flip to bearish.

In 2021, Solana became a very attractive cryptocurrency as its value soared by more than 5,077% in a mere eight months. Phantom was undergoing beta testing in April 2021. The project saw a 4,400% increase from 40,000 users in July to 1.8 million users in December. The team tweeted:

“In just 9 months we have grown to over 1.8M monthly active users with no sign of slowing down!”

Solana runs through the Proof of Stake consensus. Hence, its users secure the network by staking their SOL tokens. However, unlike most blockchains, the staking is done by validators, carefully vetted Solana users tasked with processing new blocks in the blockchain.

The staking feature was already a hit among Solana users. The Phantom platform had over $1M in SOL staked. The Phantom team wrote:

"This year, our users have staked over $16B worth of SOL, swapped over $1.3B of tokens, and made over 55M transactions on their favorite dapps!"

Notably, NFTs contributed to Phantom’s success as well. It allows wallet holders to trade and hold Solana-based NFTs through NFT marketplaces like Solanart. It has 541,851 total sales with a total SOL volume of 4,542,038, about $798 million.

Despite enormous growth, the desktop browser-based crypto wallet has no plans to slow down. In addition to expanding to over 10 million users, the company is finishing up its mobile applications for iOS and Android. Overall, Solana has built a large and fast-growing community of users.

Looking at the Solana price chart, we see that SOL has dropped during the ongoing session. If the current sentiment persists, SOL could drop to $170. However, if buyers are able to retake control, we could see SOL move back towards $180.