The Solana price started the previous week in the red but registered a sharp increase on Tuesday, rising by $140.22. SOL continued to push up on Wednesday, pushing up by over 8% and setting at $151.60. Despite the bullish sentiment, the price fell back on Thursday, dropping by almost 4% on Thursday and settling at $146.13. On Friday, SOL remained in the red, registering a marginal fall, before recovering over the weekend, rising by 1.09% on Saturday and then 0.25% on Sunday to end the weekend at $148.08. 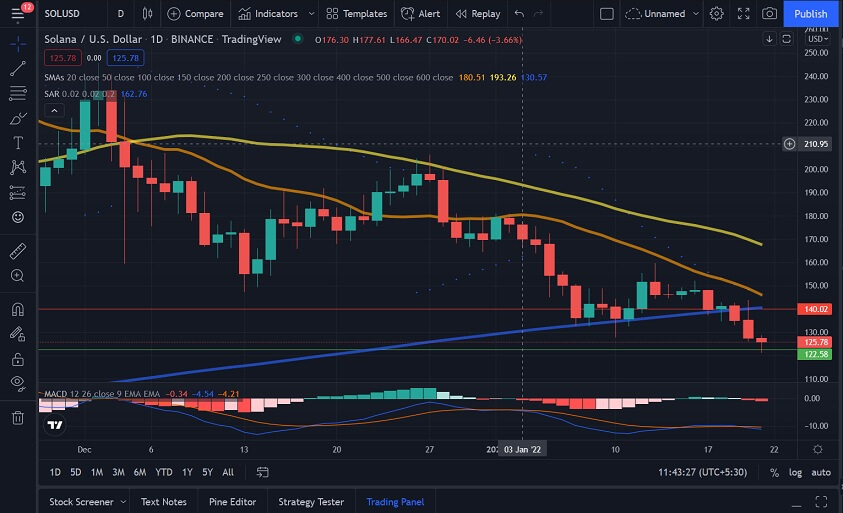 After the positive weekend, the Solana price fell back in the red on Monday, dropping by 5.51% to $139.92. At this level, the 200-day SMA was acting as support, and the price recovered on Tuesday, rising by 0.98%. However, Wednesday saw SOl back in bearish territory, as it slipped below the 200-day SMA and settled at $135.22. SOL continued to drop on Thursday, dropping by nearly 6% and settling at $127.64, and then dropping to $125 during the ongoing session.

the MACD has flipped to bearish, indicating that we could see the price drop further. 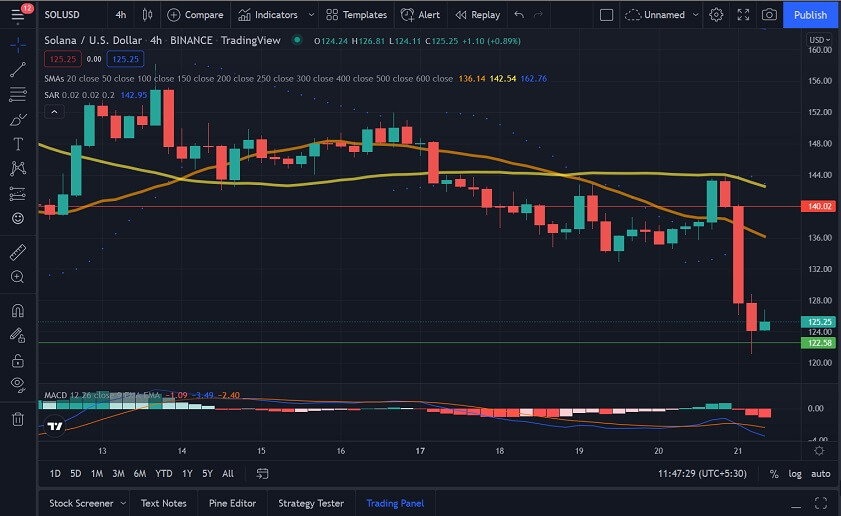 The Parabolic SAR and MACD have flipped to bearish, indicating that the price could drop further.

Shark Tank star and billionaire investor Kevin O’Leary sees several leading altcoins that he believes have the potential to add problem-solving value as the blockchain world expands and evolves. In an interview with Anthony Pompliano on The Best Business Show, O’Leary said cryptocurrencies should be viewed as functional “software” rather than simply alternate forms of money.

When it comes to determining which blockchain projects to pursue, the investor says he relies on the same process of vetting teams and vision as with traditional software companies. He cited his hands-on approach with layer-2 scaling solution Polygon (MATIC) as a real-world example.

“I’ve seen this movie before. I was an investor in software engineers twenty-two years ago at the Learning Company when we made educational software. The way I used to do it then is the way I’m doing it now…

If I want to invest in Polygon, I want to meet the engineering team, which I did in Dubai. I met the team, heard the vision of what they’re doing, looked at the economic reality at the outcome, the potential of it.

O’Leary said that beyond the initial concept, he wants to see the potential for a positive economic impact too.

“Here’s the second test. What economic value are they creating?

In the case of Polygon, aggregating transactions to reduce gas fees on Ethereum is a smart idea. You have an economic reason to pursue that. You save money. Transaction fees are less. I think the potential of that is large.”

"I say to institutions, ‘You criticize me for investing in Bitcoin? You own a big position in Microsoft [and] a five-percent weighting in Yahoo. What is that? That’s software."

Looking at the Solana price chart, we can see that SOL has been extremely bearish during the current week and has dropped below $125 at the time of writing. If the current bearish sentiment persists, we could see the price drop to $120.