Tron Price Prediction: TRX Gets Off To A Bearish Start, Slips To $0.057

The Tron price slumped back in the red as it failed to push to $0.060 over the weekend, instead dipping down to $0.056 during the ongoing session, with sellers in control. TRX had been fairly positive during the previous week, registering an increase of 1.49% on Friday. On Saturday, the price continued to push up, rising over 5% and moving to $0.060. However, the price fell back after reaching this level, dropping by 2.52% on Sunday and ending the weekend in the red before dropping further during the ongoing session.

The Tron price was quite bearish during the previous weekend, falling over 10% on Friday. The price continued to drop on Saturday, dropping nearly 7% to $0.056, before recovering on Sunday and rising by 1.52%, settling at $0.057. However, Monday saw TRX back in the red, as it fell by 4.56% to $0.055 before making a fairly strong recovery on Tuesday and rising to $0.056, an increase of over 2%. Wednesday saw TRX remain in the green, as it registered a marginal increase, rising by 0.23%. 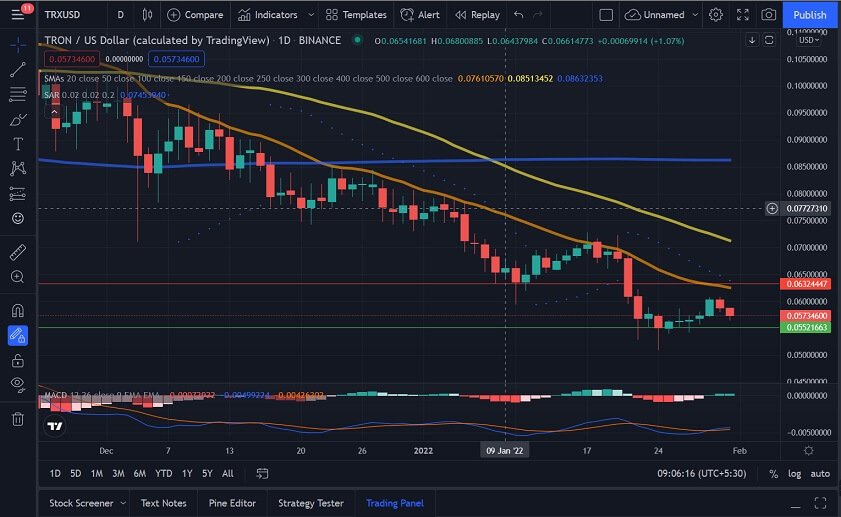 The Tron price managed to remain in the green on Thursday as well, registering a marginal increase of 0.36%. Friday saw a slightly more significant increase, as the price rose by 1.49% and moved to $0.057. The weekend started with TRX rising by over 5% on Saturday, moving to $0.060, before falling back on Sunday, dropping by 2.52%, and falling to $0.058. TRX is hovering between $0.056 and $0.057 during the ongoing session as sellers look to push the price lower. 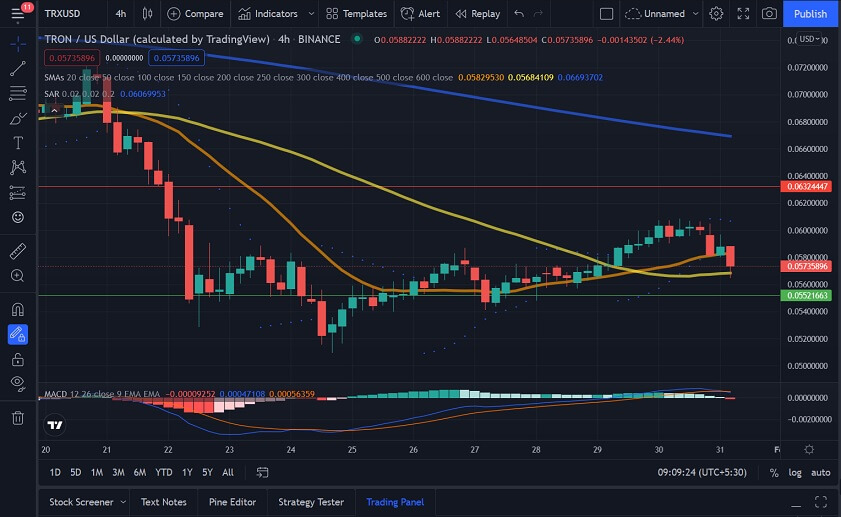 We can see that the Parabolic SAR and MACD have flipped to bearish, indicating that we could see the price drop further.

Looking at the Tron price chart, we can see that TRX has gotten off to a fairly bearish start to the week. If the current sentiment persists, we could see TRX drop to $0.055 before recovering.