The Tron price has started the week on a slightly positive note, with TRX marginally up as buyers look to establish control in the market. TRX has been fairly bearish in recent sessions after pushing up by just over 1% on Thursday. The price fell back on Friday, dropping by almost 3% after a fairly volatile session. The weekend saw TRX remain in the red as the price registered a marginal drop on Saturday before dropping by over 2% on Sunday to end the weekend at $0.058 before recovering during the ongoing session.

The Tron price started the previous weekend on a positive note, registering an increase of 1.59% on Saturday. However, the price fell back on Sunday, dropping by 2.51% and ending the weekend at $0.062. The price continued to drop on Monday as the bearish sentiment persisted, falling by nearly 5%, slipping below the $0.060 level, and settling at $0.059.However, TRX made a strong recovery on Tuesday, pushing up by almost 6%, before dropping back on Wednesday, falling by over 3% and settling at $0.060. 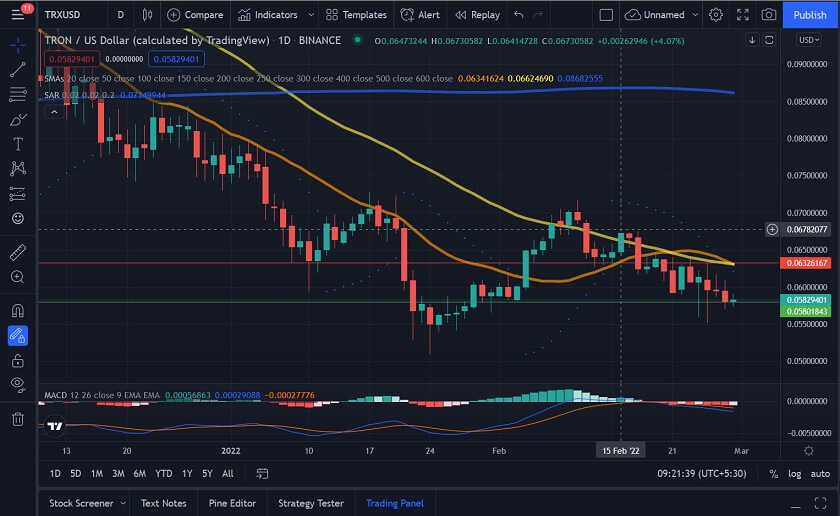 After falling on Wednesday, the Tron price was back in the green on Thursday, rising by 1.15% and moving to $0.061. However, the price fell back in the red on Friday after a volatile session, dropping by nearly 3% and settling at $0.059. The weekend saw TRX remain bearish, with the price registering a marginal drop on Saturday and then dropping by over 2% on Sunday to end the weekend at $0.058. The current session sees TRX marginally up, as buyers look to push TRX to $0.060.

We can see that the MACD is currently bearish, indicating that we could see the price drop.

More On Tron: How To Trade TRON (TRX): A Step-by-Step Guide 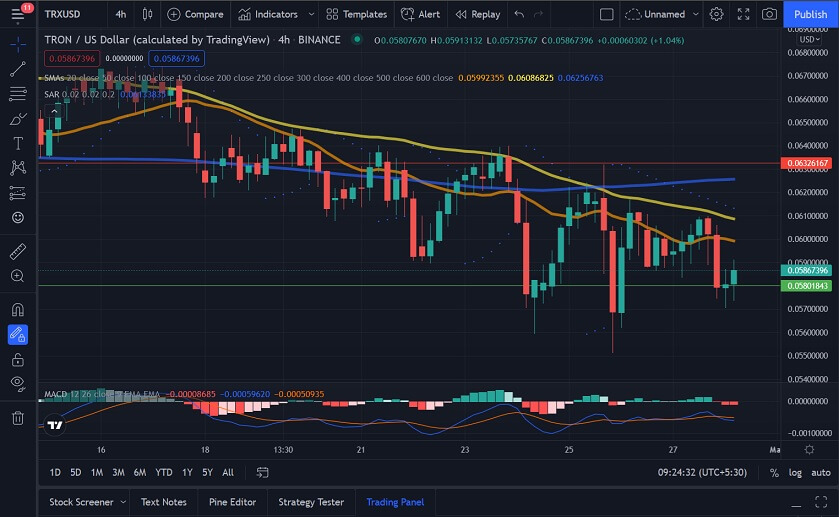 We can see that the MACD and Parabolic SAR are both currently bearish, indicating that we could see the price drop. But if TRX is able to recover, we could see them flip back to bearish.

The Tron price chart shows us that TRX is marginally up during the current session after a bearish weekend. If the current sentiment persists, TRX could push to $0.060, but if the bears can reverse the trend, TRX could drop below $0.058.

22 Reasons Why You Should Invest In Tron (TRX) Today

Should You Buy Tron?

Why TRON (TRX) Is So Cheap?