How Much Will Verizon Stock Be Worth In 2023 And Beyond?

If you’re searching for the top Verizon stock forecasts for 2023-2030, read on. In this article, we’re taking a look at VZ shares to find out what the experts have to say about its future price performance.

If you are planning to invest in Verizon stock, there are many things you may need to know. If your primary focus is to invest in the long term, then you must understand how VZ shares will grow in the coming years before investing.

This guide will discuss our in-depth Verizon stock price prediction for the months and years ahead, highlighting potential opportunities for the VZ stock and answering key questions related to Verizons investments.

To help clarify the Verizon’s long-term prospects, presented below is a brief overview of our VZ stock price prediction & forecasts for the years ahead:


In keeping with our traditions, we will not rush you through the forecasts for all the years under consideration. Rather, we will begin with background information, discuss the price history of Verizon stock, before discussing its price predictions for the coming years. It is important that you read between the lines to get the information that will help you make the right decision.

What You Need To Know About Verizon 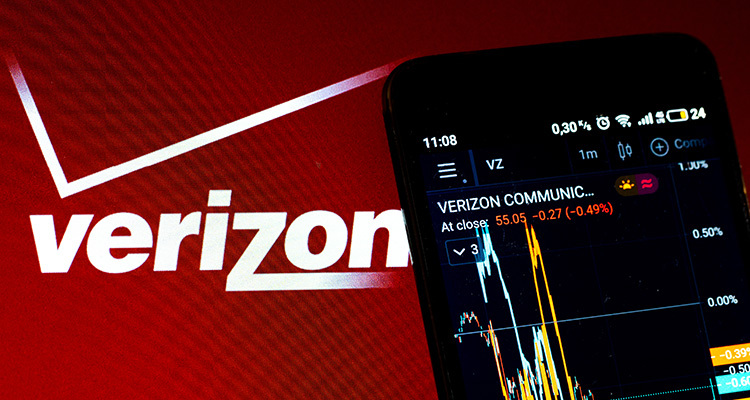 Verizon Communications Inc. is an American multinational telecommunication conglomerate. Commonly called Verizon, the company is a corporate component of the Dow Jones Industrial Average. It is a top-ranking conglomerate in the telecommunications and mass media industries. Though it focuses more on mobile telephony and wireless broadband, its products and services cut across telephone and internet services.

Verizon operates the largest wireless carrier in the United States. Simply referred to as Verizon's mobile network, it had as many as 120.9 million subscribers in 2020. The number is expected to have increased significantly by now. It is also among the biggest telecommunication companies, by revenue. It has also been listed among the top 20 of Fortune 500 corporations in the United States for more than 20 years running.

Verizon was founded in 1983 as Bell Atlantic Corporation, one of the original Regional Bell Operating Companies. A series of mergers and consolidations saw the company change its official name from Bell Atlantic to Verizon Communications in 2000. The name change was made official after the original company merged with GTE, another important telephone company at the time. Upon changing its name, Verizon became the largest local telephone company in the United States.

Verizon is headquartered in Manhattan, New York City and serves the United States as its primary market. However, it is a global brand that serves a worldwide market. Verizon’s products are not limited to landlines and mobile phones. The company is involved in cable television, broadband, IPTV, Internet, digital television, digital media and telematics. It has been at the forefront of innovations in its industry.

Though the original company was formed several years earlier and had gone public earlier too, Verizon Communications officially started trading on the stock market in 2000. Yahoo Finance has historic price data dating back to the 1980s, but we will focus on the historical price data of the new company formed after the merger in 2000.

Sometimes, it is good to consider the forecasts of other authority websites before discussing ours. Here, we will present Verizon stock predictions as presented by some forecasting websites.

Wallet Investor is pessimistic about Verizon stock, at least for its 1-year forecast. Their analysts predict that the Verizon stock price prediction will drop to $49.723 per share in the next one year.

Gov.Capital has one of the most optimistic forecasts for Verizon stock. According to their current forecast, VZ stock could be worth as much as $96.861 in the next year. The 5-year Verizon Communication Stock forecast, according to the website is $390.370. Based on our own analysis, this is unrealistic.

As a long-term investment, it projects that Verizon could perform much better. According to its predictions, the value of the Verizon VZ stock could rise to $67 by the very end of 2023, rising to $75 in 2024, and achieving a mean price of $82 by 2025. That’s a steady increase of over 90%.

Before delving fully into Verizon (VZ) stock price forecasts, it is pertinent to note that price predictions are not infallible prophecies. Rather, they are projections made by analyzing the price data of an asset and considering other factors that can affect the price. Therefore, it is best to take the following VZ price predictions and forecasts as expert suggestions of what the price could be in the future.

From the price history section, you can notice that Verizon stock has been growing at a rather disappointing pace. Though we can’t label it a poor stock, its performance leaves so much to be desired. Even within the last three months of last year, 2022, the stock has been fluctuating regularly without any tangible growth.

Though Verizon is a top telecommunication company, the price of its stock has not been growing at a remarkable pace. One of the major reasons for this is that the company pays dividends regularly. We don’t expect any major change in its culture, so the price of the stock will continue to grow gradually.

Do you plan to buy and hold Verizon shares in the long term? It is important that you understand how the price of the stock is likely to move in the coming years. We’ll discuss our forecasts straightaway.

As per our Verizon stock price forecast for 2024, the VZ stock price will likely trade for a minimum value of $74.81 throughout the year. The maximum esitmate is projected to be up to $82.75 per share. The average price of the stock should be in the region of $78.46 per share.

In 2025, our forecasts show that the minimum price of Verizon stock (VZ) will be in the region of $77.28. The maximum price is forecasted to be traded around $87.75 and we expect the average price to reach the $82.00 mark per share.

Verizon’s revenue has been increasing at a respectable pace for several years. By 2026, we believe that the company’s finances will even be better. With revenue growing at an interesting pace, the price of Verizon stock is likely to pick up as more investors rush in to take advantage.

Are you a long-term stock investor? Can you invest in Verizon stock and wait for 5 years before cashing out? Then 2027 is probably the year you are most interested in. Five years is enough time for any decent investment to become more valuable and we believe VZ will be worth a lot more by then. You must have also received so much as dividends by 2027.

According to the result of our analysis and market sentiments, Verizon stock (VZ) is expected to trade for a minimum price of $88.73 per share. The maximum price is projected to be up to $99.43. The average price throughout the year could be in the region of $84.26 per share.

Over the years, Verizon Communications Inc. has made several acquisitions. We expect that the company will make many more acquisitions in the coming year to serve its customers better and position itself to take advantage of a growing market. Such notable improvements will likely have positive effects on the price of its stock.

In 2028, our forecasts show that the minimum price of Verizon stock prediction could be $98.96. The maximum price is projected to be in the region of $92.05. The average price of the VZ stock for the year could be traded at $85.01 per share.

Verizon has what it takes to remain at the top of the telecommunication and mass media industries in the United States. The company also has what it takes to expand further and earn more international clients. It is already recognized as a global brand and we anticipate further expansions that could potentially have a huge impact on the price of its stocks.

Like every other top multinational in the United States, Verizon Communications Inc. must have strategic plans that extend to 2030. On our part, we expect that the company will roll out several wonderful products and services that will significantly improve its reputation, revenue, earning, and valuation. We also believe that the price of its shares will be worth much more than what it is now.

Should You Invest In Verizon (VZ) Stock?

If you decide to judge by the way the price of Verizon stock has grown in the last 22 years or thereabout, you will not be keen on buying it. But if you consider how often the company pays dividends, you will know that it is an income-yielding stock.

So is Verizon (VZ) stock a buy? There are several reasons to trust Verizon and buy its shares. The company is well-positioned to take advantage of any new trend in telecommunication. It has done really well in the past and has everything it takes for a big corporation to grow further in the future. We believe that the company will grow bigger and its shareholders will earn more from the investment in the coming years.

Coming to how the price of Verizon stock can perform in the years ahead, we have every reason to believe that it will perform well. Our forecasts show that the stock will become a lot more valuable than what we have now in a few years to come. Buying now that the price is low gives you better chances of earning big.

Though Verizon stock should be considered risky like any other stock, it is important to state that it is relatively safe. Though it is volatile, it doesn’t lose too much value at a time. It is also a revenue-yielding stock, so your passive income will be dropping little by little as you expect your investment to grow over time.

Open an account with eToro, deposit some funds with USD, and finally – buy Verizon shares from just $10.

Are you willing to invest in Verizon Communications Inc. stock but need answers to some pressing questions? Here are answers to some of the commonest questions we get about Verizon stock price investing and forecasts:

Is Verizon stock a good investment for the future?

Yes, Verizon stock looks like a solid investment for the future. The company is a top corporation and we believe it will perform even better in the future. The value of its stock will also go up in the coming years.

Will Verizon stock go up?

Yes, Verizon stock can reach $100 if it continues to rise up. What we don’t currently know is when the stock will reach the mark. What we know is that it has the potential to reach and surpass that amount.

It is possible that Verizon stock will reach $1000 in the future, but it will take several years, perhaps decades. We can’t rule out the possibility, but the reality is that it will take many decades.

According to our forecasts, the minimum price of the Verizon stock in 2025 will be $77 while the maximum price will be $87.

What will be the price of Verizon stock in the next ten years?

Though this forecast article does not cover ten years, we have enough data to know that Verizon stock (VZ) could be worth anything between $130 and $140 per share.

No, not according to our predictions, at least. Verizon is a top-ranking multinational and one of the largest telecommunications conglomerates in the United States. We don't see the company going down anytime and we don't see its stock crashing in the future.

Is Verizon stock a risky investment?

Verizon can be classified alongside other stocks as a risky investment. However, observing the stock closing can show you that it is relatively safe.