Basic Attention Token: Why Is Every Trader Going Crazy Over BAT?

Basic Attention Token, or as it is often known as BAT (it’s ticker symbol), is a favourite among many in the cryptocurrency trading world.

BAT is a cryptocurrency you surely won’t forget, and that’s not just because of its funny-sounding name.

It’s out there to revolutionise how digital advertising works, introducing a new system that they say is fairer.

In this article, we’re going to look at what makes BAT so special and if it’s a good choice for cryptocurrency traders or not.

What is BAT trying to achieve?

Like many other good cryptocurrency projects, their sights are not just set on replacing traditional currency, they are also trying to fix another important issue.

BAT is targeting the advertising niche, something that hasn’t been too explored in cryptocurrency and gives BAT a competitive edge and potentially even a monopoly.

In short, the BAT is attempting to more effectively measure user attention to digital advertisements by monetising it for the benefit of both the user (audience) and publisher (content creators).

They do this in two ways:

The best explanation of what BAT does is the BAT website:

“The Basic Attention Token is the new token for the digital advertising industry. It pays publishers for their content and users for their attention, while providing advertisers with more in return for their ads.”

Effectively, BAT wants to decentralise the web and bring about web 0.3; a more decentralised web where control is in the hands of content creators and not in powerhouses such as Facebook and Google.

They think it’s unfair that internet giants grow rich while publishers go out of business.

Supposedly, Google and Facebook take up to 73% of all revenue made in advertising and 99% of all growth.

This inefficiency has a direct impact on users as BAT also claims that too much of our resources are used for the sake of advertisements and that this is not fair for users.

They claim that up to 21% of our phone’s battery life is taken up by advertisements and as much as 50% of mobile data is advertisements. But that’s all the tip of the iceberg.

By creating a reward mechanism, advertisers can see more clearly what publishers are more effective. It will also help them target their audiences better.

BAT is also attempting to counter fraud and malware as well to protect their user’s privacy.

BAT is led by Brendan Eich, who is also the creator of JavaScript and the co-creator of Mozilla Firefox.

How does BAT work? 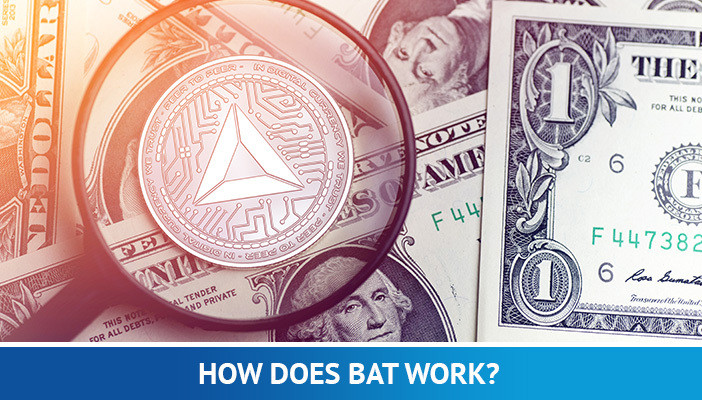 BAT is an ERC-20 token, which means that it doesn’t have its own blockchain and instead is built upon the Ethereum blockchain. And, as with all other ERC-20 tokens, BAT is decentralised and open-source.

This brings with it a number of advantages and disadvantages. The clearest advantage is that BAT makes use of Ethereum’s resources and can speed up the development process.

For example, they don’t need to concern themselves with creating and maintaining a whole new blockchain. They can instead focus on moulding BAT into what they want it to be.

Using Ethereum’s blockchain also means that BAT is easily accepted by many other cryptocurrency wallets, which can speed up its usage and popularity.

However, utilising Ethereum can be problematic if the team behind BAT want to develop the cryptocurrency in a different way.

The most obvious problem is that Ethereum still uses a proof of work algorithm, which many regard as inefficient, especially in comparison to proof of stake.

There are three main components to BAT’s system, the user (who views content), the advertiser (who wants to advertise products), and the publisher (who creates content).

The BAT token can be exchanged between users, publishers, and advertisers in BAT’s proposed ecosystem.

Users can donate tokens to their favourite websites (publishers). BAT tokens can also be used for premium services and content on the BAT platform.

User attention is measured as users view advertisements in active tabs and calculated based on duration and pixels in view in proportion to relevant content.

The team behind BAT are still developing more methods to measure user attention to advertisements.

Is BAT a tradeable asset?

BAT claims not to be a digital currency, security, or commodity, but, of course, this won’t stop people from viewing and using it in that way. If it can be exchanged, it can be traded.

It is possible that BAT may increase its supply to keep moving or it may face problems in the near future.

However, it should be mentioned that creating new tokens could have an adverse effect on its price.

To understand more about how BAT works, you can read the white paper here.

BAT is heavily tied to the Brave browser, which claims to be faster, more secure and more privacy orientated than other browsers.

So far, Brave is the only browser that BAT works with and because of this, BAT’s success or failure may depend on how successful the Brave browser is.

If Brave becomes more popular, it will likely have a positive effect on BAT, but if it fails to catch on, the effect could be devastating.

It is also important to consider the possibility of BAT being adopted by another larger and more well-known browser, such as Google Chrome, Safari or Mozilla Firefox.

Such an event could really accelerate BAT’s progress, but we are likely far away from this point at the moment.

It should also be mentioned that to earn BAT from Brave, users need to opt-in to their ‘privacy-respecting’ ads. The Brave browser works for Windows, Mac OS, and Linux.

How well has BAT performed? 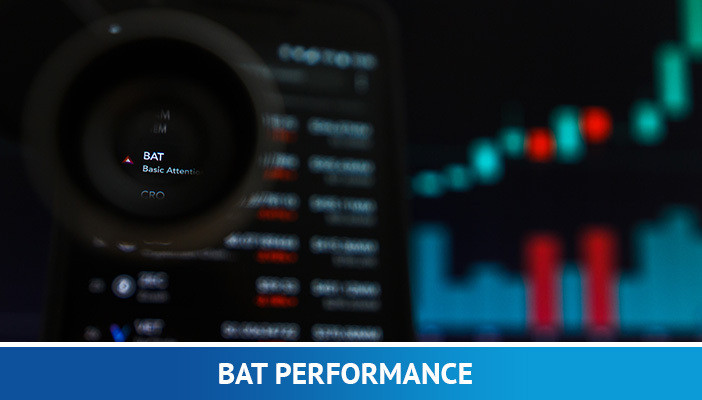 At the time of writing, BAT is the 81st largest cryptocurrency listed on CoinMarketCap, with a market capitalisation of $1,905,122,440.

A key point to make is that BAT is relatively stable in comparison to other cryptocurrencies. This is especially true of more recent months. For some traders, this highly appealing and is a nice change.

However, because of the lack of volatility, BAT may be a better long-term investment than a short-term asset to day trade.

Another key thing to point out is that since around March 2019, BAT has increased tremendously in trading volume.

This is great because it means more people are trading it and which means that it will be easier to trade it.

Trades will be less likely to fail because your broker is unable to connect you with a buyer or seller.

Further to that, it may mean that it might be secretly growing in popularity.

Usually, we wouldn’t advise trading a cryptocurrency this small, but BAT has shown great promise in recent years and is definitely one to watch.

If BAT reaches the top 10 in terms of market capitalisation, it should be on all traders’ radars.