Bitcoin Price Analysis: BTC Drops But Manages To Stay Above $36,000

The Bitcoin price failed to stay above $38,000, as sellers drove the price back down below $37,000. The current session sees BTC below $36,500, as sellers look to drive the price to $36,000. The Bitcoin price started the current week on a fairly positive note, rising by 1.04% on Monday. BTC continued to push higher on Tuesday, rising by 0.76% and moving to $37,006. However, Wednesday saw BTC back in the red, as the price registered a marginal drop before slipping below $36,500 during the ongoing session.

The Bitcoin price started the previous week in the red, registering a drop of nearly 2% on Monday and falling to $42,287. The price pushed back from this level, registering a marginal increase on Tuesday before falling back on Wednesday, dropping by 1.62% and settling at $41,717. BTC continued to drop on Thursday, registering a drop of 2.36% and falling to $40,735. Friday saw BTC register a significant drop, falling over 10%, slipping below the $40,000 level, and settling at $36,551. 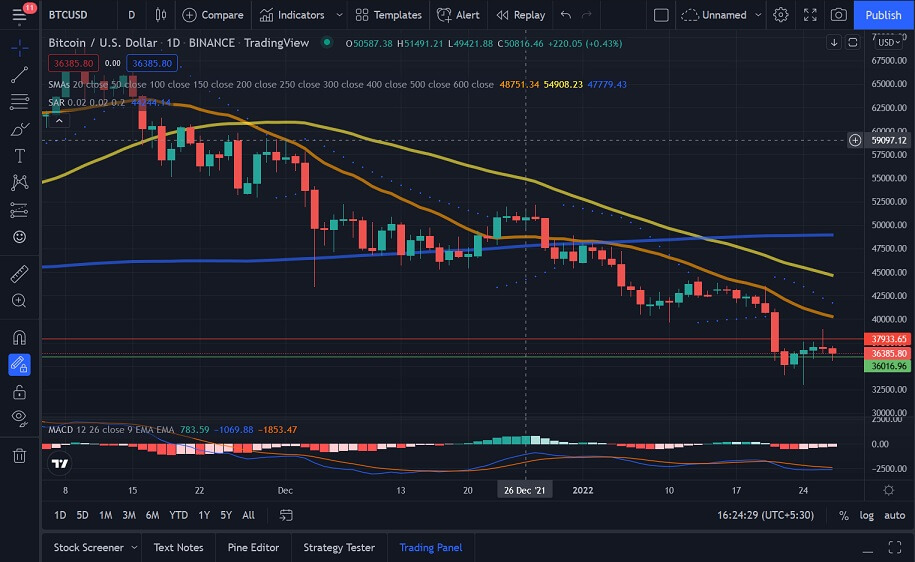 Looking at IntoTheBlock’s IOMAP for the Bitcoin price, we can see that BTC faces strong resistance at around $37,952. At this price level, over 715,000 addresses have sold more than 661,000 BTC.

Former CEO of Goldman Sachs, Lloyd Blankfein, recently said that cryptocurrencies are evolving and revealed he has changed his mind on the crypto asset space years after bashing Bitcoin as a “vehicle to perpetrate fraud.”

Speaking to CNBC’s Andrew Ross Sorkin, Blankfein was asked for his view on the cryptocurrency space after showing skepticism in the past. He said:

"Look, my view of it is evolving. I can’t predict the future, but I think it’s a big thing to be able to predict the present, like, ‘What is happening?’ And I look at the crypto, and it is happening."

The former CEO clarified that by “happening,” he means the entire cryptocurrency ecosystem has matured over the past year. Goldman Sachs itself has started offering clients ways to trade and custody crypto assets, with analysts at the bank estimating BTC could hit $100,000 by taking further market share away from gold.

Blankfein’s comments came amid a crypto market sell-off that saw the price of BTC drop to a $34,000 low. In total, the space saw its market capitalization drop from $2.1 trillion to $1.5 trillion before starting to recover.

The former CEO noted that while crypto has lost a “lot of value,” it is at a point “where it’s trillions of dollars of value contributing to it and whole ecosystems are growing around it.” Blankfein added the space benefits from blockchain technology, instantaneous transfers, and reduction of credit risk.

Cramer revealed Tom DeMark’s analysis shows that “both Bitcoin and Ethereum could be looking at downside trend exhaustion bottoms this week, if not today, I think you need to take him seriously.” Cramer is the host of the CNBC show “Mad Money w/ Jim Cramer."

The former hedge fund manager, who personally owns some ETH and has previously owned BTC, added:

"To me, that says it might be too late to sell, and you need to consider buying. I know I am, especially if we get a final leg down."

According to Cramer, DeMark noted that Bitcoin’s current drop is identical to the one seen last year, which to Cramer means “there’s a good chance that history continues to repeat itself” and BTC moves higher in the near future.

Cramer added BTC is at no.11 of DeMark’s 13-session countdown pattern, which the technician uses to identify when a rally or decline may become exhausted and reverse. Per Cramer, we “need two more negative closes before his buy trigger fires.”

If the current rally ends too soon, however, Cramer said DeMark “wouldn’t be surprised to see a two- or three-day panic selling climax” that could see the price of the flagship cryptocurrency plunge to $26,355. As for ETH, the cryptocurrency has “already hit 13 on his buy countdown for the first time since the peak.” The coin recently fell beneath the technician’s downside price projection of $2,434.

MicroStrategy stock has taken its biggest tumble in two decades amid scrutiny from the US SEC over the firm’s accounting of Bitcoin losses, per a Bloomberg report. The SEC took issue with how the Virginia-headquartered data intelligence unit reflected Bitcoin’s price volatility in its recent filing.

Using non-generally accepted accounting principles (non-GAAP), MicroStrategy’s number folk attempted to report the company’s finances as if Bitcoin’s price had not fallen. Only, Bitcoin’s price has halved since November.

MicroStrategy currently owns around 124,391 BTC (worth about $4.65 billion), more than any other public company by far. The company, run by stubborn Bitcoin bull Michael Saylor, closed trade down 45% from its six-month high recently.

Bloomberg noted the stock’s recent 30% dip over two days is second only to a 42% two-day price crash from June 2002. MicroStrategy’s market value is around $3.81 billion. The Bitcoin on its balance sheet is technically worth more than the entire company at the moment.

According to guidance for certified public accountants in the US, digital assets like cryptocurrency are “intangible assets.” The SEC demands losses associated with intangible assets, such as their value dropping, be disclosed to shareholders.

“We object to your adjustment for Bitcoin impairment charges in your non-GAAP measures. Please revise to remove this adjustment in future filings.”

In last year’s third quarter, MicroStrategy reported $65 million in impairment losses (paper losses) on its Bitcoin purchases in that period.

Bitcoin mining has continued to become more sustainable in the wake of the asset’s price surge, accompanied by critics questioning the cryptocurrency’s power consumption.

A recent report released by the Bitcoin Mining Council (BMC) indicates that between Q1 and Q4, 2021, Bitcoin’s sustainable electricity usage surged 58.96%, from 36% to 58.5%. The council, which comprises 36 Bitcoin mining organizations, stated firms under the body recorded a sustainability rate of 66.1% in 2021.

Another factor contributing to Bitcoin’s sustainability is the improved mining equipment. Over the years, mining hardware manufacturers have focused on devices that consume less energy as operators increasingly focus on lowering the carbon footprint.

Elsewhere, mining also took a hit after China outlawed the activity, citing a threat to the country’s financial sector stability. The crackdown resulted in the hash rate dropping by a whopping 46% between Q1 and Q2 as operators moved to other friendly jurisdictions.

The council’s research showed that energy usage represents 0.14% of the world’s total produced electricity and 0.44% of the global wasted energy. Compared to other industries, the report indicated that Bitcoin fared well, consuming 61.4% less energy than gold mining.

The state-run Kazakhstan Electricity Grid Operating Company (KEGOC) reportedly confirmed that electricity has been cut off to Bitcoin and crypto mining companies from January 24 to 31. That didn't stop Central Asia from plunging into darkness, as a disconnected power line left millions in Kazakhstan, Kyrgyzstan, and Uzbekistan without power or water.

Although the countries' governments said that power was being restored, Bitcoin miners in Kazakhstan won't have access to it for the immediate future. The Central Asian country last year became the second-biggest miner of Bitcoin in the world after neighboring China shut down BTC mining activities.

Kazakhstan has some of the lowest electricity prices in the world, helping miners turn more of a profit. Mining is an energy-intensive process in which people and companies use specialized hardware to run computations that secure the Bitcoin network and mint BTC.

Though Kazakhstan originally welcomed the mining industry while regulating it, the government's desire to move away from coal, coupled with large volumes of Bitcoin miners, has strained the electrical grid. According to government estimates from fall 2021, cryptocurrency miners used up 8% of Kazakhstan's available energy supply. More than half of that is coming from "grey" operations that have refused to register due to tax requirements and the prospects of further government oversight.

Looking at the Bitcoin price chart, we can see that BTC has dropped off during the ongoing session. If the current sentiment persists, we could see BTC drop to $36,000 before recovering.