The Bitcoin price is struggling to stay above $38,000 as sellers drive the price down. BTC had hit an intraday high of $38,944 but is currently at $38,112. On Friday, BTC had registered a sharp drop, falling below the 20 and 50-day SMAs and settling at $39,183. Despite the bearish sentiment, BTC registered a marginal recovery on Saturday before dropping back on Sunday, falling by nearly 3% and settling at $38,417. The price continued to drop on Monday, dropping by just over 1% after a highly volatile session before recovering during the ongoing session. 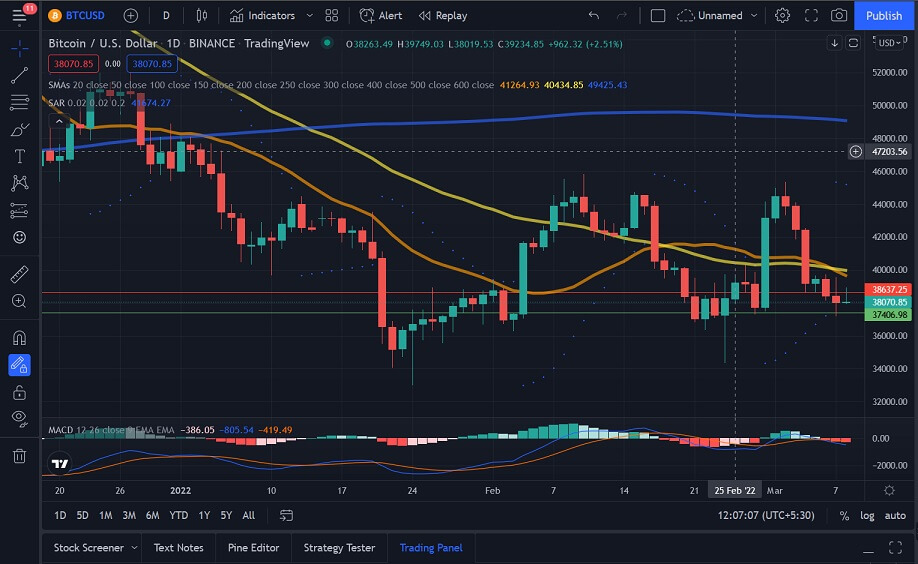 The Bitcoin price continued to drop on Thursday, as it fell by 3.25% and settled at $42,471. Friday saw BTC remain in the red, as the price dropped below the 20 and 50-day SMAs, slipping below the $40,000 level and dropping to $39,183. Despite the bearish sentiment, BTC registered a marginal recovery on Saturday before dropping back on Sunday, falling by 2.58% and settling at $38,417. Monday saw BTC remain in the red after a highly volatile session, dropping to $38,029 before recovering during the ongoing session.

IntoTheBlock’s IOMAP for the Bitcoin price shows us that BTC faces strong resistance at around $38,612. At this price level, over 1.5 million addresses have sold more than 939,000 BTC. 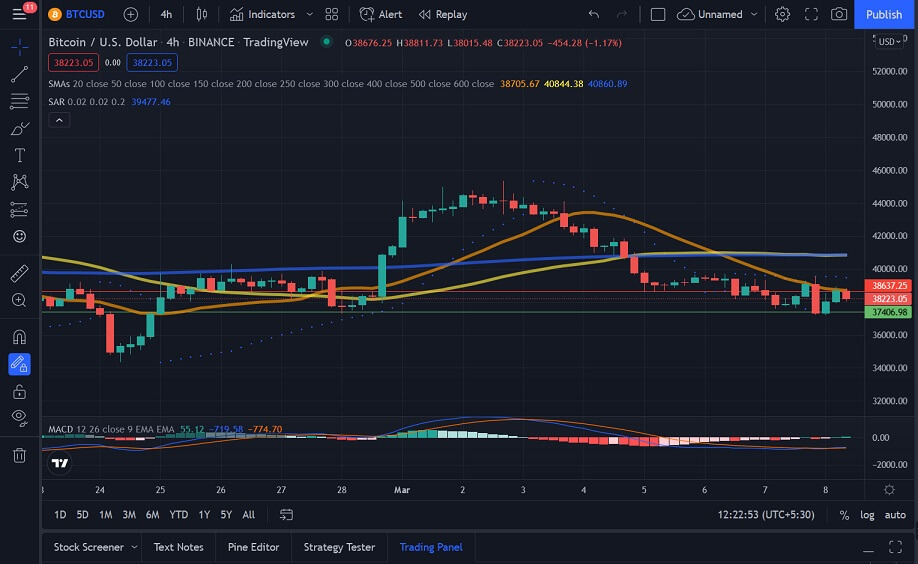 Ukraine donation numbers have soared following the invasion by Russia. The country, which had turned to crypto as a way to receive support from around the globe, has found it to be one of its most efficient avenues since then. The amount of crypto donated rapidly grew as prominent figures and entities such as Polkadot founder Gavin Wood and Binance joined the effort.

Wood alone had donated almost $6 million while Binance had pledged $10 to the cause. Other donations had come from supporters around the world, pushing the number higher. There has now been almost $70 million donated to Ukraine using just cryptocurrencies.

These donations span across the official crypto wallet addresses of the Ukrainian government and those used by non-governmental organizations (NGOs) and volunteer groups who have been aiding the fight in their own way.

SlowMist recently published a report that tracks the amount of crypto that has been donated to the Ukrainian government over the course of the war. In about a week, tens of millions had been donated to the small country to aid its fight against its Russian opponents.

The official wallets provided by the Ukrainian government have received the largest amounts of donations. SlowMist reports that these various wallets combined have received more than $38.6 million in donations. NGOs such as Come Back Alive and the UkraineDAO have seen some of the highest donations.

Related: Ways to Make (or Lose) Money With Bitcoin (BTC)

According to an official blog post, the leading US-based cryptocurrency exchange, Coinbase, has blocked “over 25,000 addresses related to Russian individuals or entities we believe to be engaging in illicit activity, many of which we have identified through our own protective investigations.”

Further, the company has shared these addresses with the US government to “support sanctions enforcement.” The post once again reiterated that the exchange is “committed to complying with sanctions.”

During onboarding, Coinbase checks account applications against lists of sanctioned entities, including those maintained by the US, United Kingdom, European Union, United Nations, Singapore, Canada, and Japan. The move comes just days after the Coinbase CEO said they would comply with the sanctions against Russia.

Many have questioned if cryptocurrencies can be used to avoid the sanctions imposed on Russia following its invasion of Ukraine. Brian Armstrong, CEO at Coinbase, said that he does not think there is a high chance.

"That being said, we don’t think there’s a high risk of Russian oligarchs using crypto to avoid sanctions. Because it is an open ledger, trying to sneak lots of money through crypto would be more traceable than using U.S. dollars cash, art, gold, or other assets."

In the same thread, Armstrong also stressed that Coinbase would not be banning Russians from using the exchange preemptively.

Looking at the Bitcoin price chart, we can see that buyers and sellers are struggling to take control of the ongoing session. If buyers manage to retain the session, we could see BTC push towards $39,000. However, if selling pressure forces the price down, BTC could slip below $38,000.

Is Bitcoin (BTC) Worth Buying?