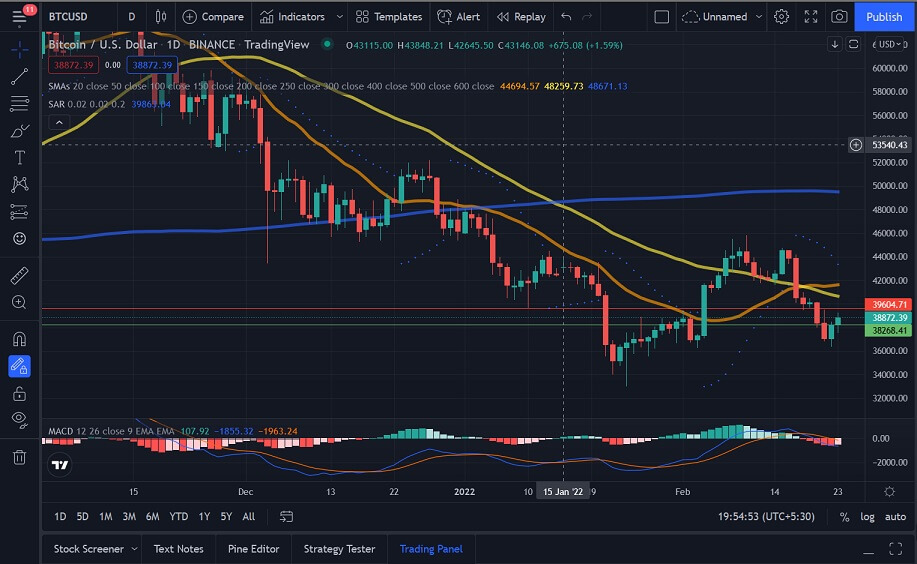 Despite the bearish sentiment, the Bitcoin price registered a marginal recovery on Saturday. However, BTC fell back in the red on Sunday, falling by over 4% and ending the weekend at $38,382. The Bitcoin price continued to drop on Monday, falling by 3.46% and settling at $37,054, before making a strong recovery on Tuesday and rising by 3.26%, moving to $38,262. The current session sees BTC up by almost 2%, as buyers look to push BTC above $39,000.

We can see that the MACD is bearish, but if BTC continues to push higher, we could see it flip to bullish.

More On Bitcoin: What Might Happen If You Invest $100 In Bitcoin Today? 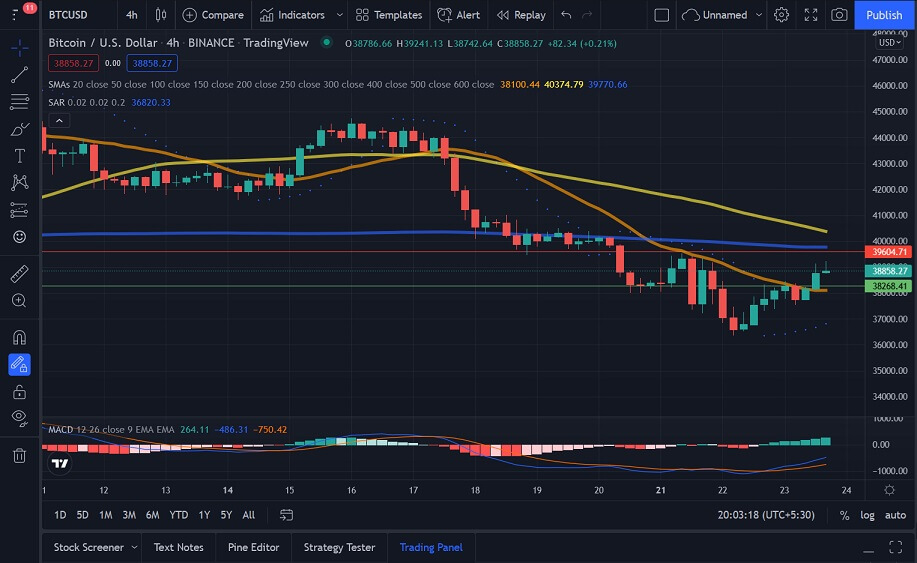 The Royal Canadian Mounted Police (RCMP) are investigating whether tweets by the CEOs of cryptocurrency exchanges Coinbase and Kraken that pushed for self-custody of digital assets violated the sanctions put in place to quell trucker protests against Covid-19 restrictions in Canada.

The Canadian securities regulator, the Ontario Securities Commission (OSC), reported the tweets to the federal police on the grounds that it felt the crypto executives were providing advice on how to circumvent the restrictions put on the funds, according to a report from The Logic.

Notably, Twitter accounts of Kraken CEO Jesse Powell and Coinbase CEO Brian Armstrong expressed their dissatisfaction with the invocation of the Emergencies Act and their support for non-custodial cryptocurrency wallets, with Armstrong pushing his company’s product.

“Concerning to see stuff like this happening in any country, especially such an economically free place like Canada.”

“Please do not fund causes directly from custodial wallets. I’m sure freeze orders are coming. Withdraw to non-custodial before sending.”

Generally, it is more difficult for law enforcement to confiscate or freeze money in non-custodial wallets since they are held by a person rather than a third party like a cryptocurrency trading platform.

This was highlighted in a recent Finbold report when the Ontario Superior Court of Justice sent Nunchuk a self-custodial Bitcoin wallet a Mareva Injunction, ordering it to freeze and disclose information about the assets involved in the Freedom Convoy 2022 campaign.

As the current bearish trends in the crypto market attract attention, the main question is what the lowest point of this correction could be. Bloomberg analysts believe that $30,000 appears to be the most probable price level under the present market conditions.

This is due to the inability of the BTC price to remain above the previous support level at the range of $37,000-$38,000. John Roque of 22V Research, in a note to Bloomberg, said:

“In the globe’s latest maelstrom — U.S./Russia/Ukraine — Bitcoin, the asset purported to be the answer to every question, has quietly weakened and is notably underperforming its arch-enemy, gold.”

Roque predicted Bitcoin might slip below $30,000, a level it hasn’t seen since July, as traders increasingly favor gold, potentially pushing the precious metal to an all-time high. Therefore, the bearish tendencies should continue to prevail in the following days, even if some correction or stabilization occurs in the short run. The historical evaluation of Bitcoin’s price dynamics confirms that the price level of $27,000-$30,000 may be viewed as the major support in terms of the premier cryptocurrency’s dynamics within the past two years.

For this reason, a further price decline to $30,000 is perceived as being almost inevitable by most market pundits. However, the subsequent price changes can follow one of these scenarios: either the formation of a new bullish cycle from the $30,000 level or the uncontrolled price decline after the break of the major support level. The likelihood of the second scenario prevents many crypto investors from opening their long positions at the moment.

According to an announcement the law firm published, it is now accepting crypto payments through Coinpass, an exchange registered with the Financial Conduct Authority (FCA), and added $DOGE, $ADA, $XTZ, $EOS, and $UNI to its platform late last year.

"We’re delighted to announce that we are now the first major UK law firm to officially accept payment in cryptoassets. We’ve partnered with @coinpassglobal to make the exchanges and have now accepted our first payment from client @AttestantIO."

The announcement noted that the law firm has a client base of “around 100 cryptocurrency developers, platforms and exchanges,” and that Attestant was the first to pay gunnercooke for its legal consultancy services in crypto.

Attestant reportedly paid for the services with ETH, with gunnercooke detailing it “advises Attestant on a range of legal and regulatory matters related to staking." Naseer Patel, gunnercooke’s finance director, was quoted saying:

"Up to now, only a few US law firms allow for cryptoasset payments so we are proud to be at the forefront of innovation in the UK. We will now be able to work with a wider variety of clients across different jurisdictions, plus offer our partners the flexibility to be paid securely in the way they choose."

Looking at the Bitcoin price chart, we can see that BTC has pushed up considerably over the past couple of sessions, given its recent bearish trend. If the current sentiment persists, we could see BTC push past $39,000 and towards $40,000.

Is Bitcoin A Good Investment And Can You Profit On BTC In 2022?