The Bitcoin price has made a fairly strong recovery during the ongoing session, as buyers look to push BTC towards $39,500 and higher. BTC had registered a drop of 1.30% on Friday before making a marginal recovery on Saturday and moving to $40,123. However, BTC fell back by over 4% on Sunday to $38,382 before recovering during the ongoing session. 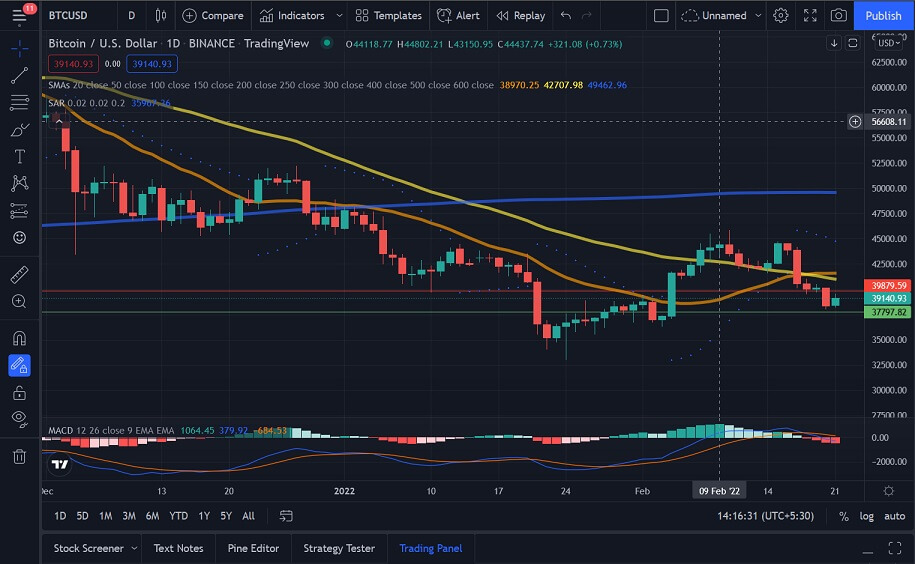 We can see that the MACD is currently bearish, indicating that the price could drop from its current level.

More On Bitcoin: The 5 Best Ways To Buy Bitcoin (BTC)

We can see that the Parabolic SAR is bearish, indicating that the price could drop. However, the MACD has flipped to bullish. 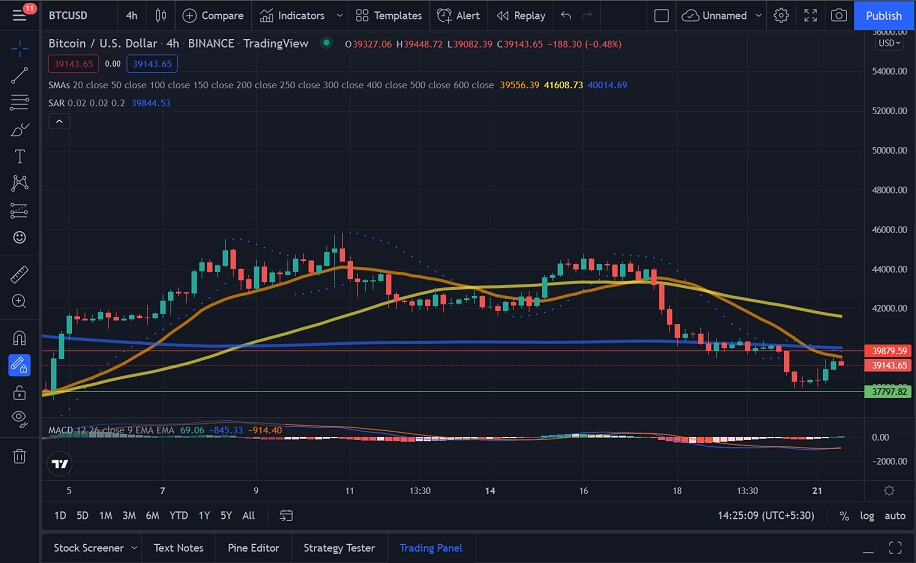 Canadian truckers protesting against Covid-19 restrictions in Ottawa over the last days has resulted in multiple demonstrators having their bank accounts frozen, and Canada’s Prime Minister Justin Trudeau invoking the Emergencies Act to include crypto transactions.

As the Canadian government tries to derail the flow of funds to the demonstrators, the Ontario Superior Court of Justice sent Nunchuk a self-custodial Bitcoin wallet to Mareva Injunction, ordering it to freeze and disclose information about the assets involved in the Freedom Convoy 2022 campaign.

In an official response to the Ontario Superior Court of Justice, Nunchuk replied that it is a “self-custodial, collaborative multi-sig Bitcoin wallet” and that it is a “software provider, not a custodial financial intermediary.”

“We do not collect any user identification information beyond email addresses. We also do not hold any keys. Therefore, we cannot ‘freeze’ our users’ assets. We cannot ‘prevent’ them from being moved. We do not have knowledge of ‘the existence, nature, value, and location’ of our users’ assets. This is by design.”

In general, the official response from the start-up after being ordered to freeze and disclose information on assets implicated in the protests highlights the problems of censoring and enforcing cryptocurrency bans.

Anonymity is one of the most compelling arguments in favor of Bitcoin, and the validity of this assertion was put to the test last week when the Royal Canadian Mounted Police (RCMP) Canada’s national police force issued an order requiring all FINTRAC-regulated organizations in Canada to stop interacting with 34 cryptocurrency wallets linked to the Trucker’s Freedom Convoy.

In particular, crypto became one of the critical ways of contributing to the truckers following GoFundMe’s decision not to distribute $9 million raised on its platform.

El Salvadora President Nayib Bukele wants to offer citizenship to those who invest in the small Central American nation. President Bukele recently took to Twitter to inform the crypto community that he was sending a list of 52 legal reforms to Congress. Among the most notable proposals, Bukele called for the removal of red tape, reducing bureaucracy, creating tax incentives, and, most importantly, offering citizenships to foreigners looking to invest in the nation.

The president promised to make El Salvador one of the most freedom-centric countries at a time when the world is falling into “Tyranny.” Bukele has become a flag bearer for Bitcoin adoption but an equally controversial figure in international politics for the same reasons. Recently, a group of senators in the United States introduced new legislation seeking to mitigate risks posed by El Salvador’s adoption of BTC as a legal tender.

President Bukele rebuked the new legislation and called the US senators “boomers” while reminding them that they have zero jurisdictions on a sovereign and independent nation.

El Salvador is set to launch its much anticipated billion-dollar Bitcoin Volcanic bonds in March next month. The funds generated from the bonds would be used to build the world’s first Bitcoin city.

Bitcoin’s descent from $69,000 to $33,000 was accompanied by a widely publicized crash in interest from mainstream consumers. Now, the latest data shows that for existing on-chain entities (holders of one or more wallets), the same is true.

The Bitcoin network typically sees around 275,000 active entities transacting compared to over 400,000 in November 2021. That reduction means that daily active entities are now at the same levels as in mid-2019 and even well below the peak of the last halving cycle in December 2017.

“This level of activity is far below bull market highs, indicative of tepid demand from new users.”

Researchers added that regardless of the cycle phase, the trend is for entity numbers to grow, which they put down to Bitcoin’s network effect playing out as forecast. While the activity dip is considerable for such a short space of time, as Cointelegraph reported, wallet numbers are going up only, and those containing 0.01 BTC (around $400) or more now number almost 10 million.

Discussing the Glassnode data, popular Twitter account TXMC argued that even if the entities involved were or are not human, there is still a reason to send BTC over the network, thus validating the entity numbers at a given point.

Looking at the Bitcoin price chart, we can see that BTC has made a fairly strong recovery during the ongoing session. If the current positive sentiment persists, we could see BTC push towards $39,500. However, if sellers push the price down, BTC could slip back below $39,000.

Is Bitcoin A Good Investment & Should I Invest In Bitcoin?

Is It Better To Invest Or Trade Bitcoin?