The Bitcoin price is struggling to stay above the $37,000 level, as bearish sentiment looks to drive the price down. BTC had registered a marginal increase on Saturday, rising by 0.25%. However, BTC fell back in the red on Sunday, falling by 4.34% to $38,382. Monday saw BTC continue to drop, as the price fell to $37,054 before recovering during the ongoing session. 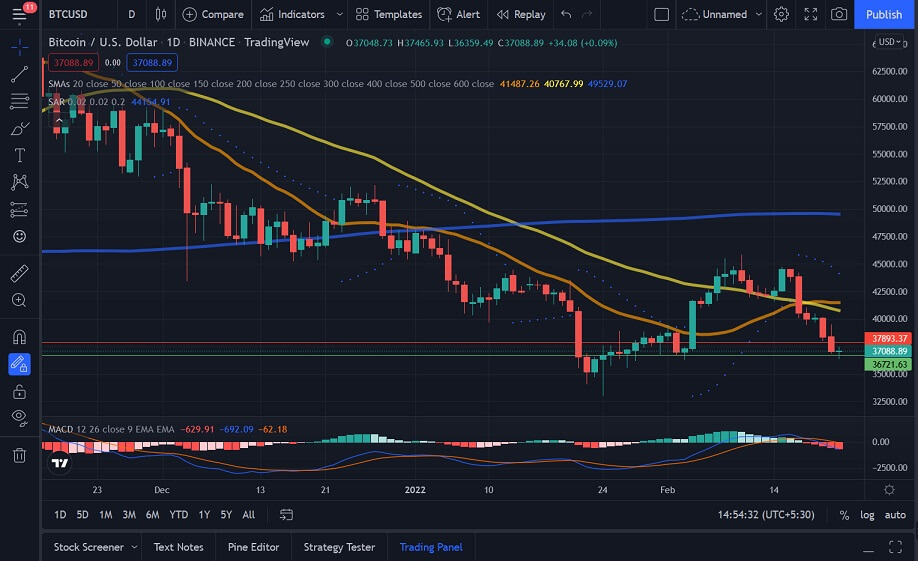 The Bitcoin price continued to drop on Friday, as BTC fell to $40,023 after a drop of 1.30%. Despite the bearish sentiment, BTC registered a marginal recovery on Saturday before dropping back on Sunday, falling by 4.34% and settling at $38,382. Monday saw BTC remain in the red, falling by over 3% and settling at $37,054 before recovering during the current session.

Looking at IntoTheBlock’s IOMAP for the Bitcoin price, we can see that BTC faces strong resistance at around $37,897. At this price level, over 813,000 addresses have sold more than 666,000 BTC.

We can see that the MACD and Parabolic SAR are bearish, but if BTC can push higher, we could see them flip to bullish. 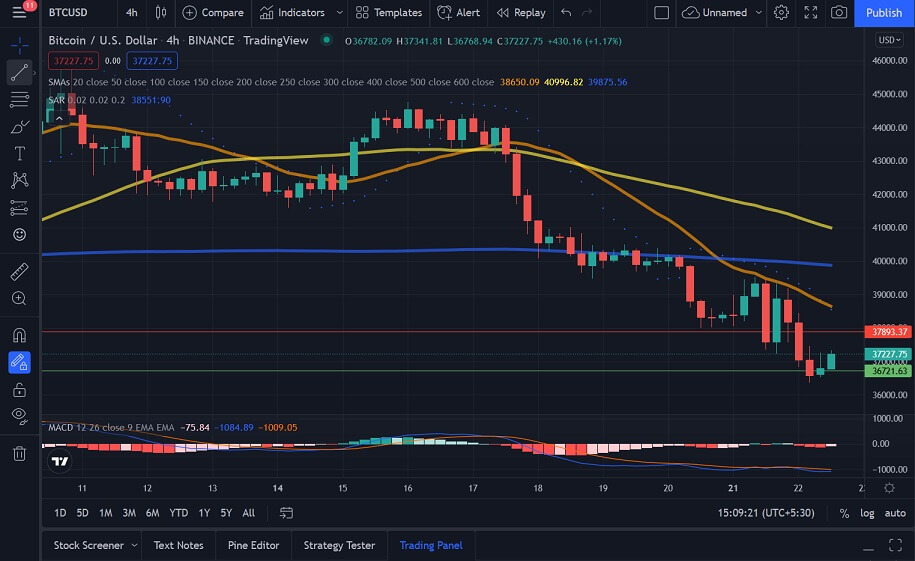 Kazakhstan’s energy authority has identified and disconnected 13 unauthorized crypto mining farms in the country, as the government continues to ramp up efforts to regulate the sector. The Ministry of Energy recently said that an inspection team has shut down 13 mining facilities with a total power consumption of 202 megawatts. Authorities vowed to find more illegal miners.

Kazakhstan President Kassym-Jomart Tokayev legitimized Bitcoin mining last June by approving a tax band for crypto mining but started to call for raising mining taxes this month. The government is expected to develop a package of measures to regulate mining by April 1, per local media.

BIT Mining, a Hong Kong-headquartered cryptocurrency miner, has terminated its data center construction in Kazakhstan due to an unstable local power supply, the company said in its quarterly report. The New York Stock Exchange-listed crypto miner said that its Bitcoin mining rigs deployed in third-party facilities in the Central Asian nation remain in operation.

BIT Mining’s withdrawal adds to the decreasing presence of Bitcoin miners in the second-largest hashrate in the world, presenting an opportunity for third-place Russia to claim the spot to trail the U.S.

More On Bitcoin: How Much Power It Takes to Create a Bitcoin

Over the last week, there’s been a lot of discussion about Canada ‘freezing’ digital currency accounts associated with the Canadian trucker’s Freedom Convoy. Last week, the Canadian government and Prime Minister Justin Trudeau invoked the country’s Emergencies Act and enacted Canada’s terrorist financing policy to blanket cryptocurrencies donations. Trudeau and the government did this to quell the protesters occupying the streets of Ottawa.

The Canadian government managed to get Gofundme to shut down the Freedom Convoy’s fundraiser, and it flagged 34 crypto addresses allegedly associated with crypto fundraisers. Reports had indicated that Canada’s police sent letters to banks and crypto-asset exchanges and insisted that companies “cease facilitating any transactions” with the aforementioned flagged addresses.

According to several financial institutions and crypto companies, the Royal Canadian Mounted Police (RCMP) did send the letters. Furthermore, another report details that an Ontario Superior Court judge has ordered financial institutions to freeze any assets tied to the Freedom Convoy, including digital assets.

“I can confirm that this is the first successful Mareva order in Canada targeting bitcoin and cryptocurrency exchanges.”

Meanwhile, despite the headlines that talk about directly freezing crypto assets, it should be noted that this can only happen by threatening enforcement and targeting crypto-to-fiat off-ramps.

According to the software developers behind the non-custodial bitcoin wallet Nunchuk, they received a Mareva injunction letter. Nunchuk wrote back to the Ontario Superior Court of Justice and told the court it could not comply with the orders.

“Dear Ontario High Court Judge, Nunchuk is a self-defense, collaborative, multi-sig bitcoin wallet. We are a software provider, not a security finance intermediary. Our software is free to use. While protecting privacy, it helps people to eliminate single points of failure and save bitcoin as safely as possible.”

For the first time in El Salvador's history, the gross domestic product hit double digits to the bewilderment of critics. The economic data from El Salvador indicate a wave of positivity for the country as the GDP climbed by 10.3% in 2021.

According to available reports, the country recorded a -7.9% change in GDP in 2020 as the pangs of the pandemic worsens. President Bukele said:

According to Banco Central, the country’s exports were up by 13% in January, accumulating $564 million, which exceeds the values of all the months of January in the last 30 years. President Bukele is banking on these figures to expect a repeat of 2021 amid the country’s renewed efforts at Bitcoin adoption.

Aside from adopting Bitcoin as legal tender, El Salvador has gone the extra mile to increase its Bitcoin holdings, launch a geothermal powered Bitcoin mining plant and announce the ambitious building of a Bitcoin city. The country’s Bitcoin adoption was also buoyed through incentives like the prize of a $30 reward to citizens for the download of the Chivo wallet and fuel subsidy for users of the digital wallet.

Looking at the Bitcoin price chart, we can see that BTC has been extremely bearish in recent sessions but has managed to register a marginal increase during the ongoing session. If BTC can recover, we could see it move to $37,500. However, if sellers retake the session, BTC could slip below $37,000.

Is Bitcoin A Good Investment In 2022?