Bitcoin Price Prediction: Can BTC Push Back Above $40,000

The Bitcoin price spent the weekend in bearish territory, as it failed to push to $40,000 after a strong push towards the end of the week. After a fairly volatile session, BTC has registered a strong increase on Thursday, pushing up by nearly 3%. Friday saw BTC continue to push higher, rising by 2.51% and moving to $39,234. However, after reaching this level, the price turned bearish, registering a marginal drop on Saturday and then dropping to $38,732 during the ongoing session.

The Bitcoin price went into the previous weekend on a fairly negative note, dropping by 1.30% on Friday. BTC managed to register a marginal increase on Saturday but fell back into the red on Sunday, falling by over 4% and dropping to $38,382. Monday saw BTC remain in the red, as sellers pushed the price down by 3.46% to $37,054. However, BTC could register a strong recovery from this level, pushing up by over 3% and moving to $38,262 on Tuesday. 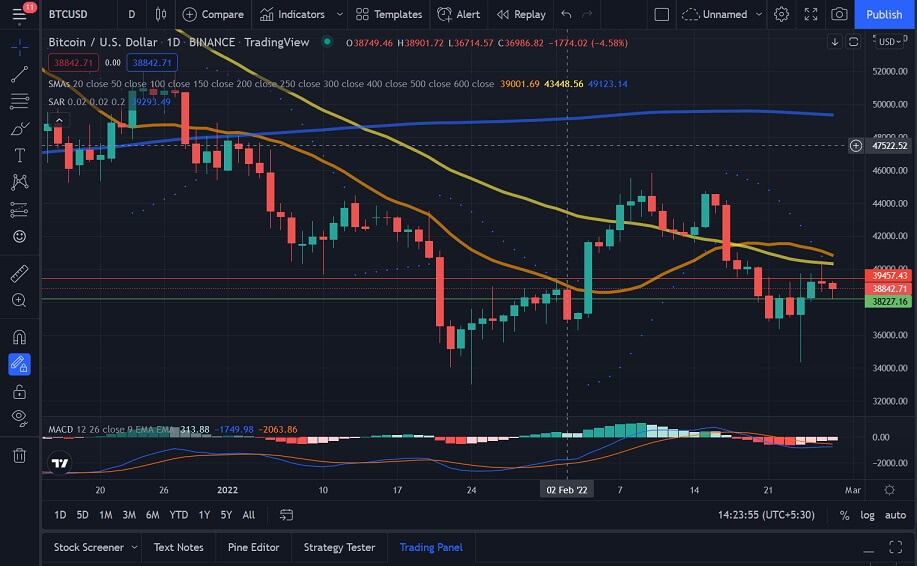 After rising to $38,262 on Tuesday, the Bitcoin price fell back in the red on Wednesday, dropping by nearly 3% and falling to $37,263. BTC recovered on Thursday after a fairly volatile session, rising by 2.71% and moving to $38,274. Friday saw BTC remain bullish, as buyers pushed the price up by 2.51% to $39,234. However, BTC turned bearish over the weekend, registering a marginal drop on Saturday and marginally down during the current session as well. 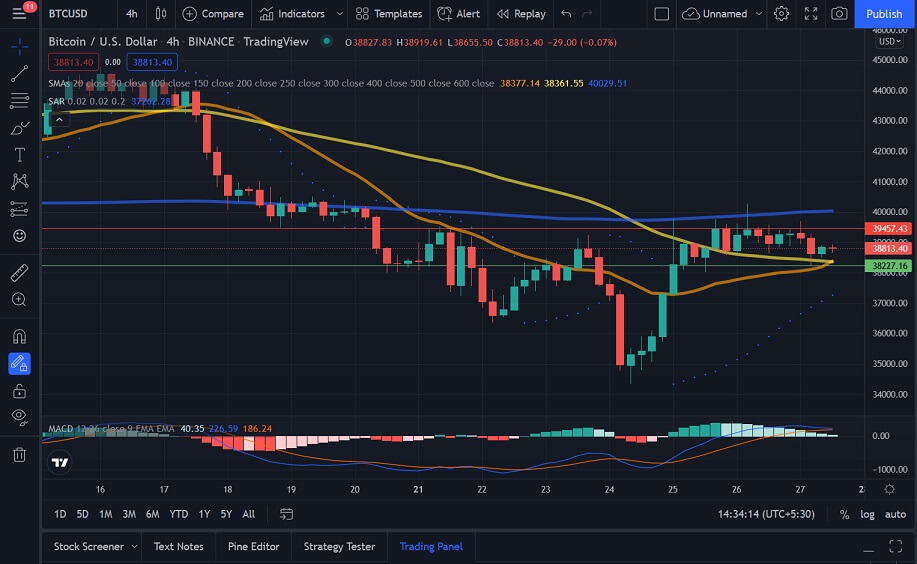 Former ‘Hacker of the Year’ Says ‘I Was Wrong, We Need Crypto’

Popular Danish programmer David Heinemeier Hansson, recognized by Google and O’Reilly with the Hacker of the Year award for Ruby on Rails web development framework, has admitted he was wrong about crypto.

Hansson, who was previously sceptical of Bitcoin, recently published a blog post titled “I was wrong, we need crypto” in response to Canada’s truckers who were protesting against Covid vaccine mandates. Hansson said that the protest turned “every Bitcoin crank a prophet,” and admitted being wrong on crypto’s “fundamental necessity” in Western democracies.

He started by explaining how he had until now been highly critical of Bitcoin and the crypto space:

“To say I’ve been sceptical about Bitcoin and the rest of the crypto universe would be an understatement of epic proportions. Since the early 2010s, some of my most ferocious Twitter battles have been against the HODL army with the laser eyes.“

He says what changed his mind about the need for Bitcoin was the recent “authoritarian response from the Canadian government:

“First the Ottawa police department got GoFundMe to confiscate donations with the intention of redirecting them to other causes, then after an outcry, they backed down to merely blocking the money for 7-10 days before refunding. That seemed like a draconian escalation completely at odds with the tens of millions of dollars raised for social justice causes during the protest summer of 2020. But at the time, I thought it was something another fund-raising platform – one less likely to collaborate with the Canadian authorities – could route around. And GiveSendGo indeed started doing just that."

He added that the concern over the donations was quickly rendered insignificant, as just a few days later, the Canadian prime minister imposed martial law on the protestors.

"Through powers intended for catastrophic events, he took to freeze the bank accounts of both Canadian protestors and donors, to compulsorily demand that tow-truck operators clear the streets, and forced insurance companies to drop policies for the protestors.“

The value of encrypted crypto donations to assist Ukraine in its efforts to repel Russia has hit a new milestone of $13 million. This development was shared by @WuBlockchain on Twitter, accompanied by a breakdown of crypto donations.

SlowMist released the statistics of Ukraine’s encrypted donations. People have raised more than 1349 ETH, 204 BTC, and some stablecoins, with a total value of about $13 million. This could mean that the demand by donors to purchase Bitcoin and Ether could be behind the price stability being witnessed in the crypto markets.

Buying BTC and ETH to assist Ukraine is potentially aiding in the ongoing crypto market recovery. The process of donating crypto to the humanitarian efforts in Ukraine has not been spared by scammers and tricksters.

The founder of Ethereum, Vitalik Buterin, cautioned the crypto community to "continue to be vigilant, and always be slow and careful when sending irreversible crypto transactions." He tweeted:

"Getting some confirmations from a couple sources that it's legit. Deleting my warning for now. But continue to be vigilant, and always be slow and careful when sending irreversible crypto transactions."

Buterin had earlier flagged a Tweet and crypto address as being potentially belonging to a scammer. He soon withdrew his statements after he confirmed that the pleas for crypto donations were genuine.

More On Bitcoin: Is Bitcoin (BTC) A Good Investment?

Bitcoin whales are “buying the dip” to increase their long-term positions. After the BTC price plunged to $34,700 following Russia’s invasion of Ukraine recently, whales made massive purchases.

According to the blockchain analytics company Santiment, the number of transactions above $100,000 and $1 million reached the highest level since January 24th. Demonstrating the high likelihood of an accumulation upsurge.

Historically, whales’ purchases largely influence the prices and capitalization of the crypto market. For instance, the past case of immense purchases at the end of January resulted in a 15% growth in the BTC price. Santiment’s analysts expect a similar dynamic to occur in this case as well.

On one hand, large purchases have a direct impact on prices and change the implications of technical analysis. On the other hand, market participants and traders monitor whales’ behavior as they have extensive access to broader markets and financial resources. Thus, most traders tend to follow whales’ approach as they believe that the strategy identified by them may prove to be valid.

This logic implies that the price dynamics of the quarter will be the effect of the “buy the dip” strategy. Bitcoin bulls can uphold price at $40,000 if the same dynamics as at the end of January persists. Long-term price movements will depend on the impact of essential factors. If such fundamental aspects are hopeful about Bitcoin’s dominance and the general crypto market, the appreciation may continue further. Otherwise, a new wave of price declines and lower volumes of purchases may follow later.

The Bitcoin price chart shows us that BTC has dropped over the past couple of sessions, although BTC has registered a recovery during the current session, pushing to $38,800. If the current sentiment persists, we could see BTC move to $38,000.

How to Trade Bitcoin With $100