Bitcoin Technical Analysis: BTC Back In The Red, But Also Back Above $36,000

The Bitcoin price fell back marginally during the ongoing session, after ending Sunday and Monday in the green. BTC has endured a hugely bearish time, and market watchers will be hoping for a reversal in fortunes. BTC had started the weekend in the red, dropping by nearly 4% on Saturday and settling at $35.198. The price made a strong recovery from this level, rising by 3.27% on Sunday and then 1.04% on Monday to settle at $36,725.

The Bitcoin price got off to a fairly positive start to the previous weekend, registering an increase of 1.59% on Saturday before registering only a marginal drop on Sunday. However, Monday saw BTC drop by nearly 2%, as BTC dropped to $42,287, before recovering and registering a marginal increase on Tuesday. BTC fell back in the red on Wednesday, as the price dropped by 1.62%, and then registered a drop of 2.36% on Thursday to drop to $40,735. 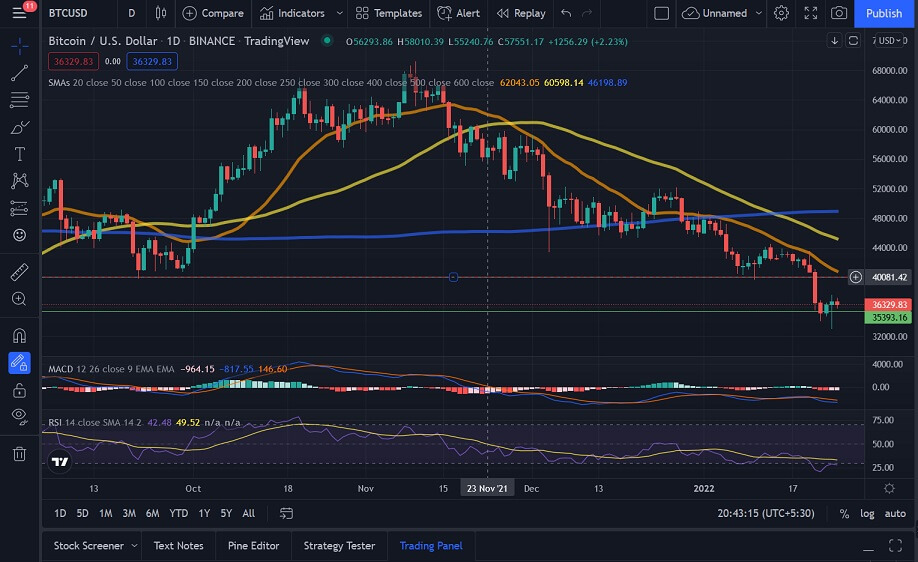 The Bitcoin price continued its bearish run on Friday, as BTC dropped over 10% and settled at $36.551. The weekend saw BTC remain in the red on Saturday, dropping by 3.70% and settling at $35,198. However, despite the bearish sentiment, BTC could register a strong recovery on Sunday, rising by 3.27% and moving to $36.347. The price continued to push up on Monday, as the price rose to $36,725 before dropping during the ongoing session.

We can see that the RSI has slipped below the neutral zone, indicating a buy signal. This means we could see BTC recover in the short term.

Looking at IntoTheBlock’s IOMAP for the Bitcoin price, we can see that BTC has strong support at around $35,411. At this price level, over 1 million addresses have bought more than 586,000 BTC.

We can see that the Parabolic SAR and MACD are both bullish, indicating that we could see the price push up significantly. 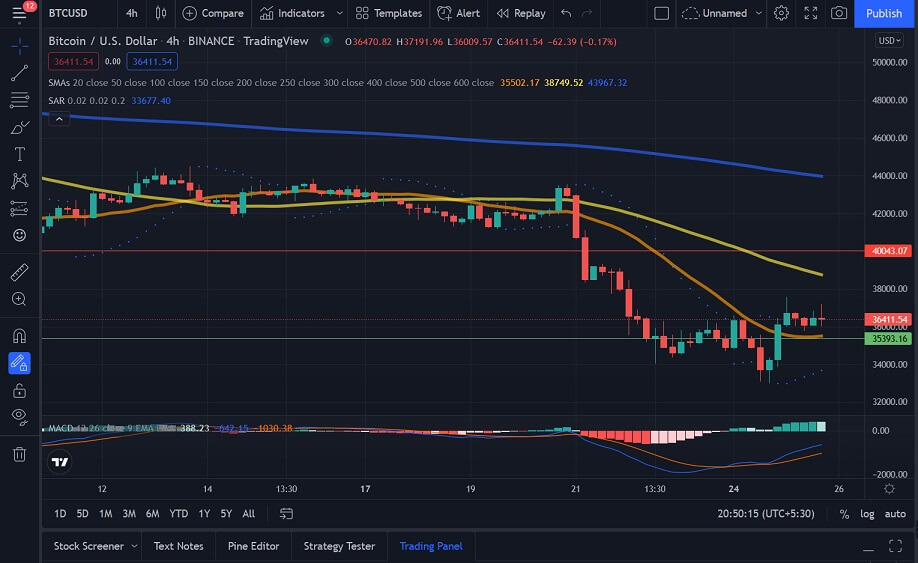 Perianne Boring, the Digital Chamber of Commerce CEO, has said fundamentals show that Bitcoin is undervalued despite the asset undergoing volatility. Speaking during an interview with CNBC, Perianne cautioned investors against focusing more on the asset’s price but they should look out for Bitcoin’s underlying value.

Perianne suggested that Bitcoin’s fundamentals are stronger than ever, considering that the network is growing faster than other tech elements like the internet. At the same time, she indicated that focusing on aspects like the growing hash rate makes Bitcoin undervalued.

According to the executive, based on multiple correlated models, Bitcoin will likely hit between $50,000 and $100,000 in 2022 while affirming the asset is the digital goal. Furthermore, she suggested that the 30-50% volatility in the cryptocurrency market is not a surprise and maintained that such price movements should be expected.

“There’s a number of models that professional crypto investors are using today. Today they’re all between $50,000-$100,000 per Bitcoin. These models are over 90% correlated and what they’re telling us is that Bitcoin is undervalued. <…> The markets are behaving just as expected, the fundamentals of the network are as strong as ever.”

Interestingly, the recent Bitcoin price drop has resulted in skepticism, with critics stating that the asset is heading towards zero value. However, the CEO noted that the asset’s fundamentals eliminate any potential to correct historic lows.

Despite the ongoing volatility, several market analysts maintain that Bitcoin is on a growth path. As reported by Finbold, Michael Bucella from BlockTower Capital stated that volatility is part of Bitcoin’s growth journey. He noted that the asset is firmly still under a growth mode.

The European country Kosovo recently banned cryptocurrency and Bitcoin mining due to spiking energy prices and blackouts. Amid the crack-down against Bitcoin mining, miners within the country have started selling off their mining equipment.

The country uses low-quality coal harvested in large quantities in Kosovo called “Lignite” to fuel over 90% of its local energy. In doing so, it reduces energy costs. Thus, it is the country with the lower energy consumption prices in the EU. Hence, Kosovo has experienced a massive increase in people mining BTC in the past years.

However, the country had recently experienced some significant challenges because of the up-surging fuel prices due to insufficient natural gas in Europe and Kosovo’s most massive thermal power plant collapse. These factors brought about cases like power shortages and power outages.

On various social media platforms like Telegram and Facebook, thousands of Kosovans have begun posting in attempts to sell off their mining machines at lower prices. CryptoKapo, a crypto pundit and admin of some of the country’s most significant crypto communities, commented on the matter. He explained that BTC miners within Kosovo are currently in a panic state and are selling or moving out their Bitcoin mining devices to neighboring regions.

Notably, all the panicking social media rallies occurred after the Kosovan government placed an immediate, though short-termed, ban on every cryptocurrency mining. The government explained that crypto mining was guzzling the country’s energy and putting the Balkan state in an energy crisis.

Bank Of America Says Stablecoin Adoption And CBDC Is ‘Inevitable’

Bank of America crypto strategists Andrew Moss and Alkesh Shah wrote in a recent note that CBDCs “are an inevitable evolution of today’s electronic currencies,” according to a Bloomberg report. The analysts wrote:

“We expect stablecoin adoption and use for payments to increase significantly over the next several years as financial institutions explore digital asset custody and trading solutions and as payments companies incorporate blockchain technology into their platforms.”

Meanwhile, an earlier report titled “Money and Payments: The U.S. Dollar in the Age of Digital Transformation” from the Federal Reserve Bank (FRB) weighed up the benefits and disadvantages of the U.S. potentially adopting a CBDC.

It considered whether a CBDC could potentially “improve the safe and effective domestic payments system” for households and businesses as “the payments system continues to evolve,” possibly resulting in “faster payment options between countries.”

In the meantime, Shah and Moss stated that the use of digital currencies issued by private companies is likely to grow. Currently, the liability for existing forms of digital currency like online bank accounts or payment apps belongs to private entities, such as commercial banks.

However, a CBDC would be different in this respect because it would be the liability of a central bank such as the Federal Reserve, wrote the FRB in a statement about the report. It also pointed out potential difficulties, including preserving financial stability, protecting the privacy of users, and combatting illicit transactions. The Fed has opened to the floor for public comment on these issues until May 20.

Looking at the Bitcoin price chart, we can see that BTC has pushed above $35,300 during the ongoing session, although the price is still down by nearly 1%. However, if BTC continues to recover, we could see it push above $36,500.