The Cardano price moved beyond $1.60 during the current session as buyers took control of the session. ADA had registered a sharp drop on Friday, dropping to $1.53, before recovering over the weekend. ADA pushed up by 0.73% on Saturday and 3.28% on Sunday to end the weekend at $1.59. The current week saw ADA continue to push up, rising by 0.50% on Monday, and is currently at $1.61 during the ongoing session.

The Cardano price had started the previous weekend on a fairly bullish note, pushing above the 200-day SMA on Saturday. However, the price fell back on Sunday, slipping below the 200-day SMA and settling at $1.83. The bearish sentiment persisted on Monday, as ADA dropped by 3.16% and settled at $1.77. ADA continued to drop on Tuesday and Wednesday, falling by 1.54% and 4.82%, respectively, to settle at $1.60, before making a marginal recovery on Thursday and rising to $1.67. 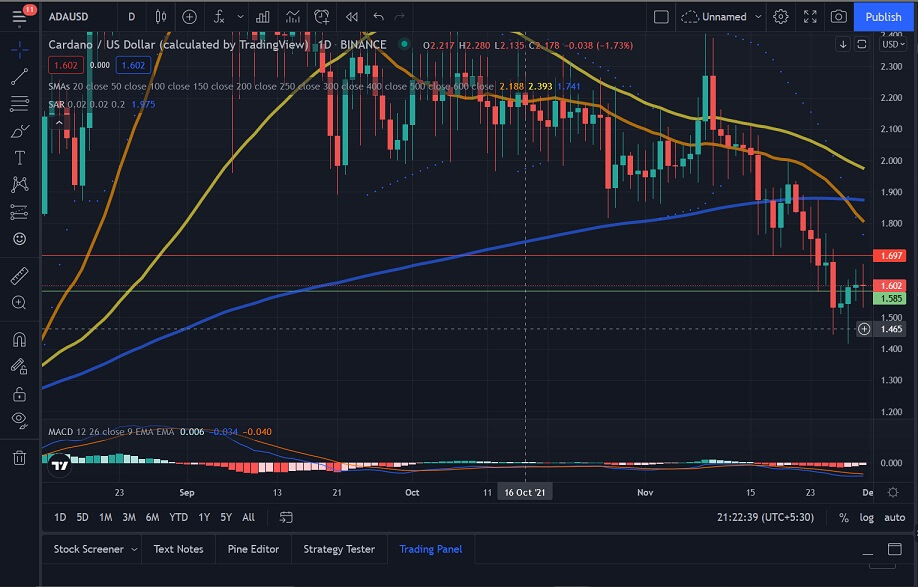 After a marginal increase on Thursday, the Cardano price fell back on Friday, registering a fall of over 8%, and dropping to $1.53. Despite the bearish sentiment, the price pushed up over the weekend, rising by 0.73% on Saturday. Sunday saw a significant increase, with ADA rising by over 3% and settling at $1.59. The positive sentiment continued on Monday, with ADA rising by 0.50% to $1.60. We can see that the current session sees buyers and sellers struggling for control, with the price currently at $0.59.

We can see that the Parabolic SAR is currently bearish, indicating a price drop. However, if the price can recover, then we could see it flip to bullish.

Looking at IntoTheBlock’s IOMAP for the Cardano price, we can see that ADA has strong support at around $1.58. At this price level, over 243,000 addresses have bought more than 5 billion ADA.

We can see that the MACD is currently bullish, indicating that we could see the price push up during the current session. 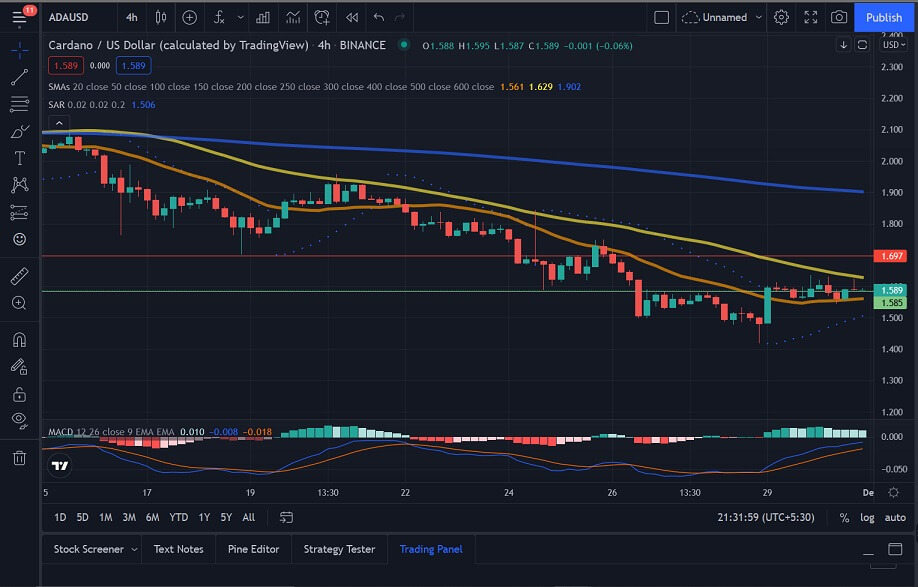 The number of active addresses on Cardano has jumped by more than 25% in November 2021, according to data from Messari. The ADA active address count peaked at over 485,000 and now stands at just over 191,500. At the start of the month, the figure hovered around 161,000.

The Cardano network andADA have been performing well this year after a slew of upgrades. The most significant of these was the Alonzo upgrade, which introduced smart contracts to the platform. With smart contracts, the network has become far more capable and has led to development related to the DeFi space.  Numerous DEXs, like SundaeSwap, are currently in the works.

It may come as a surprise that the number of active addresses is increasing, given that there has been some minor bad turn of events for the network. Recently, eToro delisted ADA for US customers, and the ADA price took a bit of a drop.

While ADA might be dropping in price, the future of Cardano looks fairly bright. The upgrades have boosted the network’s capabilities, and developers are taking to it.

There has also been a noticeable uptick in DeFi-related developments on Cardano. Ardadex became the first DEX and NFT marketplace on Cardano, and COTI is issuing a new stablecoin on the network. A new lending protocol, ADALend, will also become a major part of the ecosystem.

The Cardano price chart shows that ADA has made a strong recovery during the current week, although the price has registered a drop during the ongoing session. If sellers take control of the session, we could see the price drop to $1.55. However, if buyers control the session, then ADA could push up to $1.60.