Cardano Price Analysis: ADA Surges Past Resistance As It Pushes To $2.30

The Cardano price broke past its resistance levels in spectacular fashion, as ADA made an incredibly strong start to the current week. The current session has seen ADA climb to $2.30, after a strong surge of over 8%. ADA has been bullish since the weekend, rising by 1.14% on Saturday and then by 0.79% on Sunday to settle at $2.02. The week started on a bullish note as ADA pushed up by over 5% and settled at $2.12, with ADA breaking past this level of resistance during the current session.

The Cardano price had started the previous weekend on a bullish note, dropping by almost 3% and settling at $1.95. ADA recovered on Sunday and posted a marginal increase of 0.50% to end the weekend on a positive note. The Cardano price registered a marginal drop on Monday, as the price fell by 0.92% before it rose by 1.18% on Tuesday. The price continued to push up on Wednesday, rising to $2.06, where the 20-day SMA acted as resistance. As a result, the price dropped on Thursday, registering a fall of 3.82% and dropping to $1.98. 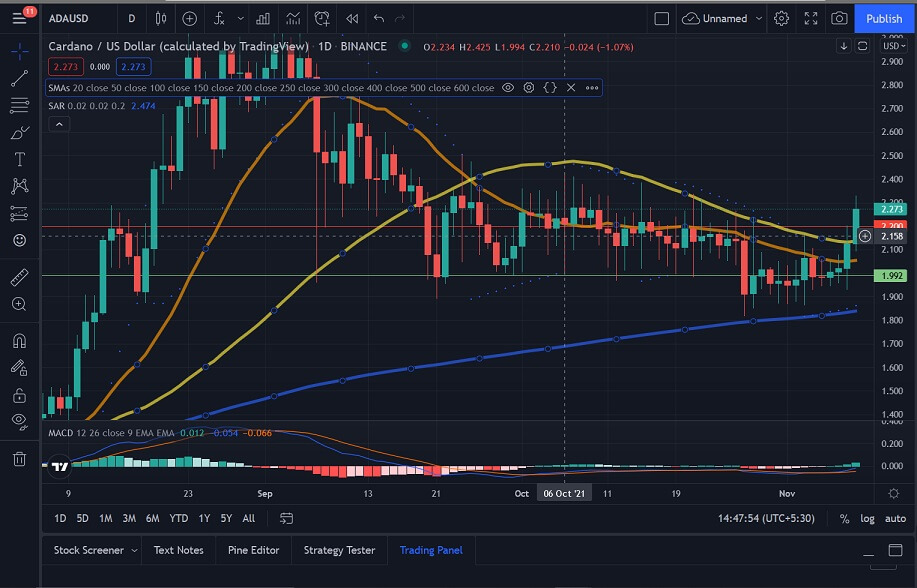 The Cardano price continued to drop on Friday, as the price registered a marginal drop before recovering over the weekend. The price rose by 1.14% on Saturday, setting at $2, before the price pushed up marginally on Sunday and rose to $2.02. The Cardano price started the current week on a very bullish note, as the price pushed up by over 5%, breaking past the 20-day SMA and settling at $2.12. The current session saw ADA break past the 50-day SMA and settle at its current level of $2.30. We can see that the Parabolic SAR and MACD are bullish, indicating that the price could push up further during the current session.

Looking at IntoTheBlock’s IOMAP for the Cardano price, we can see that ADA has strong support at around $2.17. At this price level, more than 285,000 addresses have bought more than 5.7 billion ADA.

Looking at the 4-hour Cardano price, we can see that ADA had risen to $2.11 before the price turned bearish and dropped to $2; there, the 20-bar SMA was acting as support. The price dropped further during the session, slipping below the 20-bar and 50-bar SMA, and settled at $1.97. The price recovered from this level, pushing above the 50-bar SMA, but could not push past the 20-bar SMA and settled back at $1.97. The price recovered again from this level, rising to $2.02, but fell back once again, dropping to $1.99. ADA recovered strongly from this level, as the price pushed up to $2.03 and then to $2.09. The price continued to surge as it moved above the 200-bar SMA and settled at its current level. We can see that the Parabolic SAR and MACD are still bullish, indicating that the price could move higher. 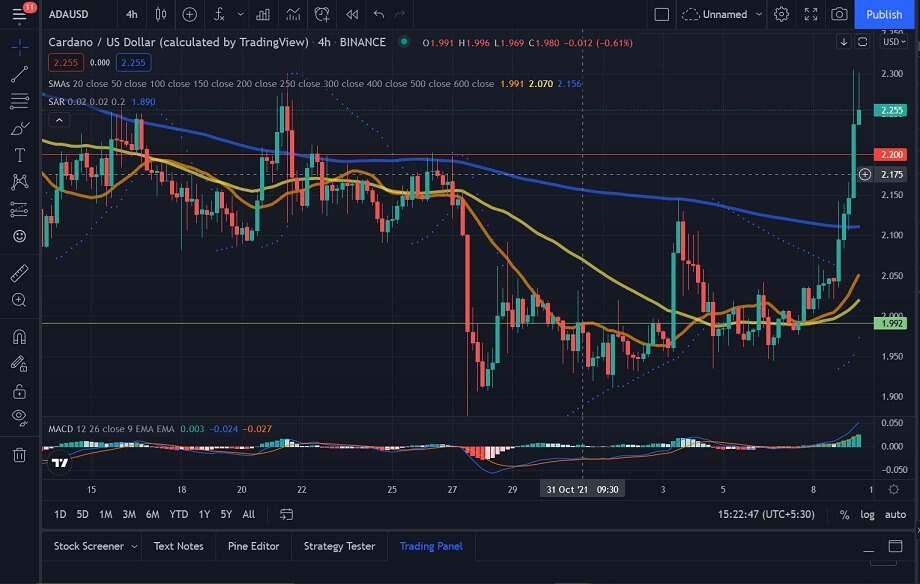 Cardano's DEX Is Up And Running

One of the first decentralized applications on Cardano, noncustodial exchange SundaeSwap, accomplished a crucial milestone in its development progress. According to the official announcement shared by the SundaeSwap team on its Twitter account, the application built, signed, and submitted to Cardano (ADA) blockchain its first transaction through Yoroi dApp Connector.

Contributors to SundaeSwap stressed that this transaction should be considered a "breakthrough" in the integration of their products with Yoroi wallet.

Representatives of Yoroi are also sure that this accomplishment is only the beginning of SundaeSwap's technical progress:

"We are thrilled as well. Thank you for all the hard work. The best is yet to come, and we can't wait to see what's in store for SundaeSwap next. The Cardano community is lucky to have you."

Introduced by Cardano's devs, EMURGO, Yoroi is a lightweight wallet client for ADA and ERG, core native assets of Cardano and Ergo blockchains.

Yoroi dApp Connector is an instrument that allows end-user Cardano wallets to interact with decentralized applications. Per earlier reports, ideologically, it is an endpoint for users entering Cardano's dApps ecosystem.

The Cardano price chart shows us that ADA has made an extremely strong start to the current week, pushing above both resistance levels. If the price continues to push up, we could see ADA rise to $2.30.