Cardano Price Prediction: ADA Fails To Push Past $0.90, Drops Back In The Red

The Cardano price failed to move to $0.90 despite a strong increase on Friday, dropping back in the red over the weekend, with ADA currently at $0.88. ADA had registered a drop of 2.48% on Wednesday, falling to $0.86. Thursday saw a highly volatile session, with the price dropping by 1.39%, falling to $0.85. Despite the bearish sentiment, ADA recovered on Friday, rising by 5.27%, rising to $0.89, before dropping back over the weekend, registering a marginal drop of 1.22% on Saturday. The current session sees ADA at $0.88, with buyers and sellers struggling to take control.

The Cardano price entered the previous weekend on a bearish note, registering a drop of 2.45% on Friday, slipping below the $1 level and settling at $0.99. ADA was able to register a marginal recovery on Saturday before dropping back on Sunday, falling by almost 7% and settling at $0.93. The bearish sentiment persisted on Monday, as ADA dropped by over 8%, falling to $0.85, before recovering on Tuesday, pushing up by 3.62% and moving to $0.88. 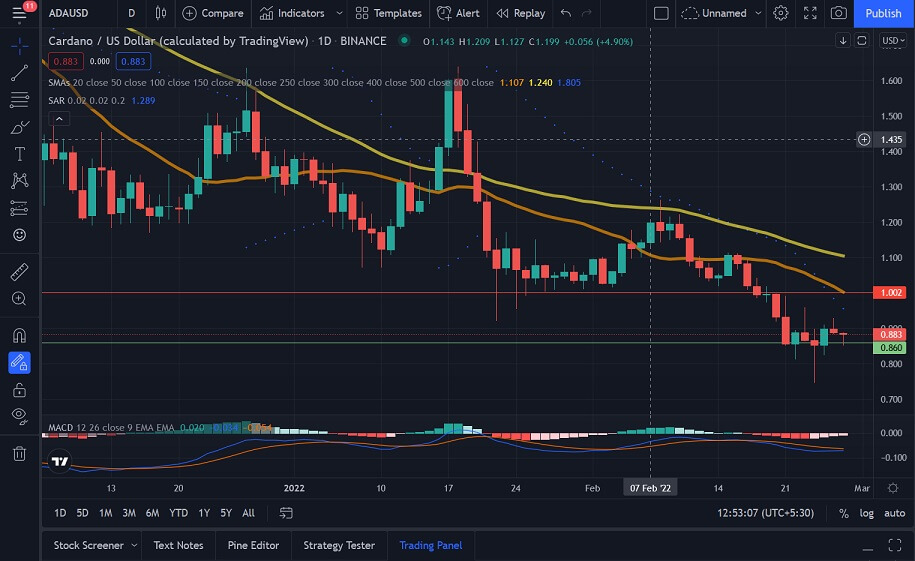 After pushing to $0.88 on Tuesday, the Cardano price fell back in the red on Wednesday, dropping by 2.48% and falling to $0.86. Thursday saw a highly volatile session, after which ADA dropped to $0.85 before registering a strong recovery on Friday, pushing up by over 5% and moving to $0.89. Despite the strong recovery, ADA fell back in the red over the weekend, falling by 1.22% on Saturday and marginally down during the ongoing session.

We can see that the MACD is currently bearish, but if ADA can recover and push higher, we could see it flip to bullish.

More On Cardano: Is Cardano A Good Investment And Can You Profit On ADA?

We can see that the Parabolic SAR and MACD are bullish, indicating that we could see the price push higher. 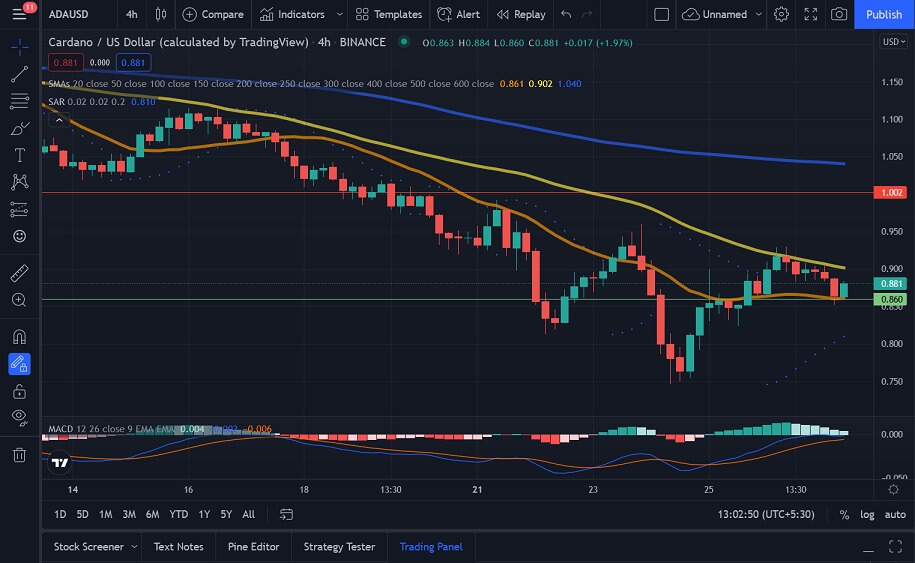 Looking at the Cardano price chart, we can see that ADA has dropped over the past couple of sessions, although the price has clawed back lost ground during the current session. If ADA continues to push higher, we could see it recover and cross $0.90.

What Might Happen If You Invest $100 In Cardano (ADA) Today?

Pros and Cons of Investing in Cardano

How To Make (Or Lose) Money With Cardano (ADA)?