The Cardano price registered a marginal recovery during the current session, up by nearly 1% after registering a significant drop on Wednesday. ADA had started the week on a fairly positive note, rising by 1.54% on Monday and moving to $1.05. The price continued to push higher on Tuesday, rising over 4% and moving to $1.09, before dropping back on Wednesday, falling over 6% and settling at $1.02. The current session has seen a marginal recovery, as the price looks to push to $1.05.

The Cardano price started the previous week on a fairly bearish note, dropping by over 5% on Monday and settling at $1.06. The price continued to drop on Tuesday, falling by 2.25% and dropping to $1.04, before recovering on Wednesday and rising to $1.07 after an increase of over 3%. ADA fell back in the red on Thursday, dropping over 3% and falling to $1.04, before recovering on Friday after registering a marginal recovery. 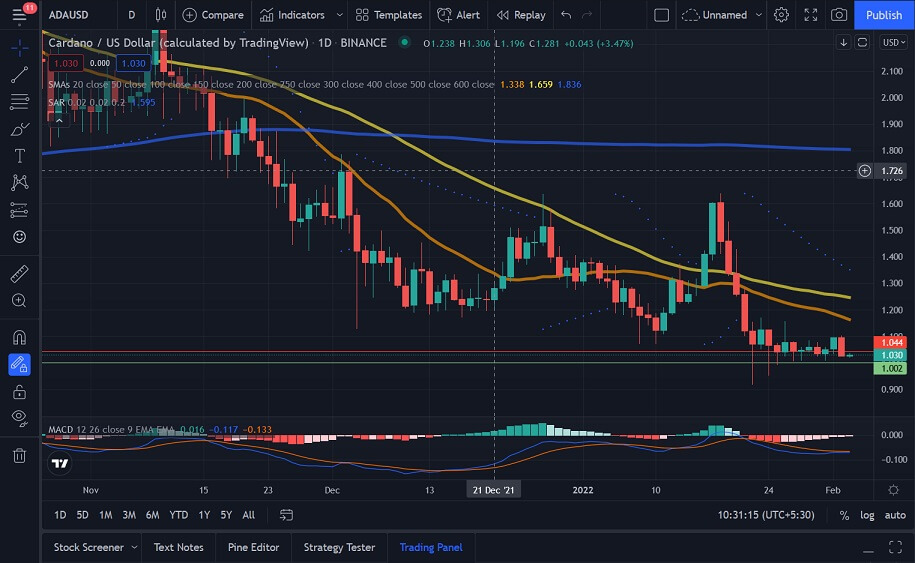 The Cardano price continued to push higher over the weekend, rising by 1,05% on Saturday, before dropping back on Sunday and falling to $1.03, dropping by over 2%. Monday saw ADA back in the green as it pushed up by 1.54%, moving to $1.05 before another increase of over 4% on Tuesday saw the price rise to $1.09. However, ADA fell back after reaching this level, dropping over 6% on Wednesday and falling to $1.02, before recovering during the current session.

We can see that the MACD is currently bearish, but if ADA can recover from its current level, we could see it flip to bullish.

Looking at IntoTheBlock’s IOMAP for the Cardano price, we see that ADA faces strong resistance at around $1.04. At this price level, over 324,000 addresses have sold more than 7.5 billion ADA.

We can see that the Parabolic SAR has just flipped to bearish, indicating that the price could drop further. 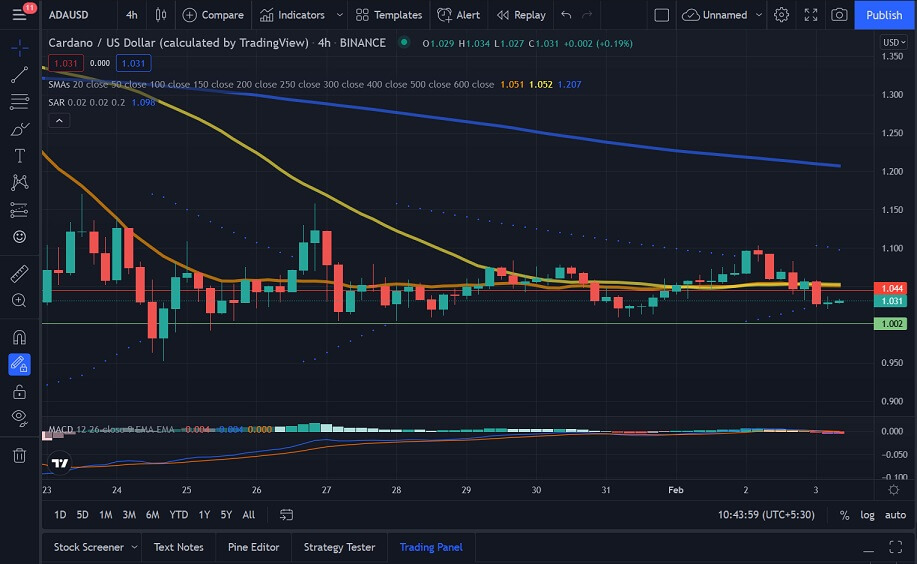 Cardano is taking its next steps to improve its smart contracts and transaction throughput. Cardano’s Basho upgrade, outlined by co-founder Charles Hoskinson in a video blog earlier this year, is in full swing. One of the announced changes was an increase in block size from 72KB to 80 KB, which takes place today.

Input-Output Hong Kong made that announcement this week on Twitter, also saying that there would be memory improvements rolled out for Plutus, Cardano’s smart contract scripting language. Both these improvements are part of Cardano’s scaling ambitions. IOHK wants to provide additional resources to provide a better experience for decentralized app users.

The firm claims that the network is designed to manage high loads competently and will be observed for at least five days after new changes are made, but also warned of peak loads during anticipated app launches and significant NFT drops.

A larger block size means more data capacity for a single block on a blockchain. This theoretically allows more transactions to be added to a single block, increasing transaction throughput. The Cardano blockchain recently experienced high congestion from its NFT marketplace, jpg.store.

Other notable upgrades to Cardano included in the Basho scaling plan are improvements in Unspent Transaction Output handling, stake distribution, and live stake distribution. There are also off-chain improvements in the works, including the introduction of sidechains. A sidechain is a blockchain connected to the main blockchain via a bridge to enable tokens from one chain to be used in another and returned to the main chain.

Looking at the Cardano price chart, we see that ADA has managed to register a marginal recovery during the ongoing session after a significant drop on Wednesday. If the current sentiment persists, we could see ADA push to $1.05, but if sellers manage to take control of the session, ADA could drop to $1.