Cardano Technical Analysis: ADA Looks To Move Up To $2.10 As Price Recovers

The Cardano price posted a marginal recovery, as the 20-day SMA acting as support pushed up the price marginally during the current session. ADA had been quite bearish over the week, as the price dropped by 1.65% on Friday before posting a marginal recovery on Saturday and rising to $2.01. However, the price was back in the red on Sunday, as it dropped by 0.57% before recovering during the current session.

Cardano Price Chart Indicates ADA Could Push Up To $2.10 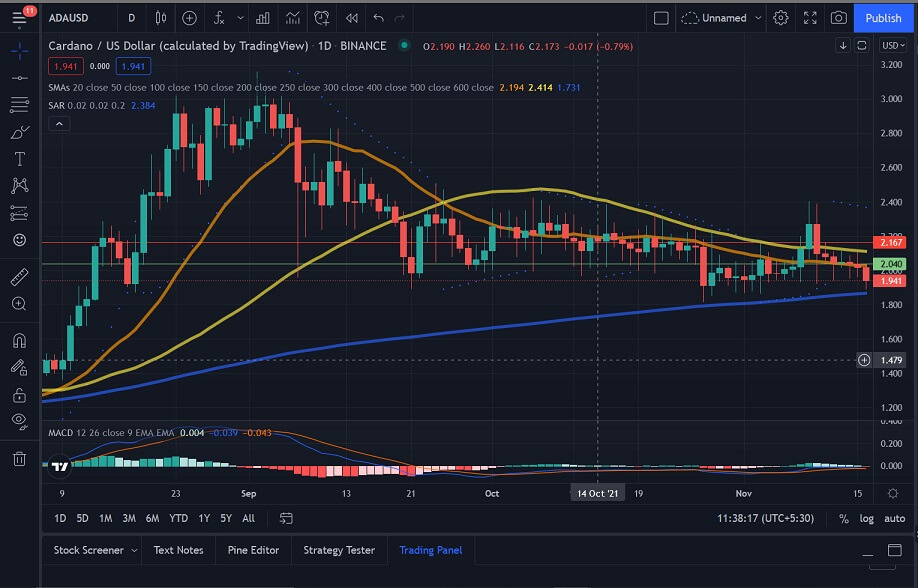 After dropping to $2.10 on Wednesday, the Cardano price continued to remain bearish, as it fell by 0.92% on Thursday and then by 1.65% on Friday to settle at $2.04. At this level, the 20-day SMA acted as support, pushing up the price marginally on Saturday. However, ADA fell back in the red on Sunday, as it dropped by 0.57% on Sunday, ending the previous week on a bearish note. However, the current week began on a positive note, as ADA pushed up marginally, with buyers taking over the session. We can see that the Parabolic SAR is currently bearish. However, if the price continues to increase, we could see it flip to bearish. The MACD, as we can see, is already bullish.

The 4-hour Cardano price chart shows us that ADA had pushed above the 200-bar SMA on the 8th and reached $2.30 on the 9th. However, the price fell drastically from this level, dropping to $2.17, where the 20-bar SMA was acting as support. The price continued to drop as ADA slipped below the 20-bar SMA and dropped to $2.10. Here the price recovered marginally, thanks to the 200-bar SMA acting as support. However, sellers pierced this level of support, and ADA dropped to $2.01. With the 50-bar and 200-bar SMAs now acting as resistance, the price failed to push beyond this level and is currently at $2.06 after pushing above the 20-bar SMA. 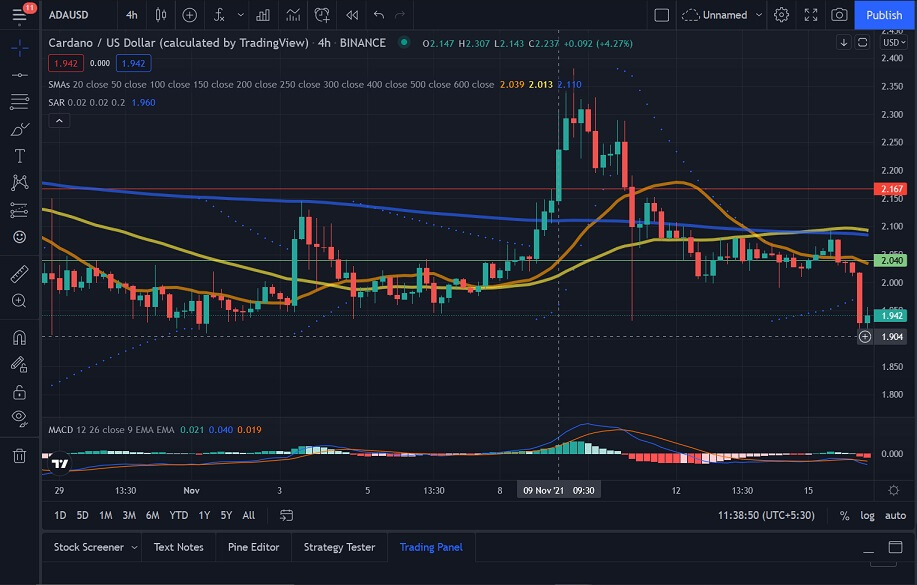 In a recent interview, Sergio Sanchez Ferreros, Head of Product at Emurgo, the commercial arm of Cardano, talked about Yoroi light wallet for Cardano.

The company has “offices and manages projects in Singapore, Japan, the USA, India, and Indonesia.”

“Yoroi is a web light wallet for Cardano available as a browser extension and as a mobile application. Light wallets don’t need to download or synchronize the blockchain. This means that once you open the wallet, you can send or verify the reception of transactions right away.”

Ferreros shared his thoughts about Yoroi and how it helps the Cardano ecosystem:

“As one of the founding entities of the Cardano blockchain, EMURGO is able to officially update and maintain Yoroi Wallet in coordination with our Cardano ecosystem partners and Cardano’s overall technical development, including things like ADA staking, connecting Cardano-based dApps, Project Catalyst, NFT minting, and more..."

Looking at the Cardano price chart, we see that ADA has risen during the current session, with the price up by over 1%. If the current sentiment continues, we could see ADA move up to $2.10.