The Cardano price had registered a sharp fall on Friday, as it fell to $1.53. However, the price recovered over the weekend, as it registered a marginal increase on Saturday and then pushed up by over 3% on Sunday to settle at 41.59. ADA managed to stay in the green on Monday, as it registered a marginal increase, but fell back on Tuesday, dropping by over 3% and settling at $1.55. The ongoing session sees ADA at $1.61, with buyers looking to push the price higher.

The Cardano price had pushed above the 200-day SMA on Saturday (20th) but fell back on Sunday, as sellers moved the price back below the 200-day SMA to $1.83. ADA continued to drop on Monday, falling by over 3% and settling at $1.77. Tuesday saw the price drop further, registering a drop of 1.54%, as ADA fell to $1.75. The bearish sentiment persisted on Wednesday, as ADA registered an even more significant drop of nearly 5%, falling to $1.66. ADA managed to post a marginal recovery on Thursday but fell back on Friday, as it fell by over 8%, dropping to $1.53. 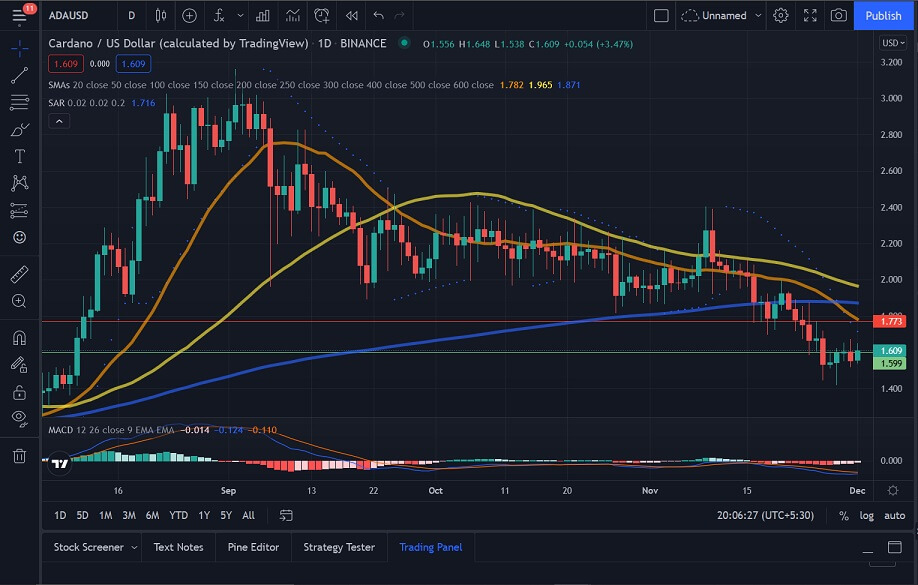 After dropping by over 8% on Friday, the Cardano price recovered on Saturday, as it registered a marginal increase. Sunday saw a significant rise, as ADA rose by over 3% to end the weekend on a bullish note at $1.59. The price remained in the green on Monday before dropping by 3.05% on Tuesday, falling to $1.55. The ongoing session sees ADA back in the green as buyers took control of the session, with the price currently at $1.60.

While the Parabolic SAR is still bearish, if the price rises, we could see it flip to bullish.

Looking at IntoTheBlock’s IOMAP for the Cardano price, we can see that ADA has strong support at around $1.59. At this price level, more than 231,000 addresses have bought over 5.2 billion ADA.

We can see that the MACD is currently bullish, indicating that ADA could push higher from this level. 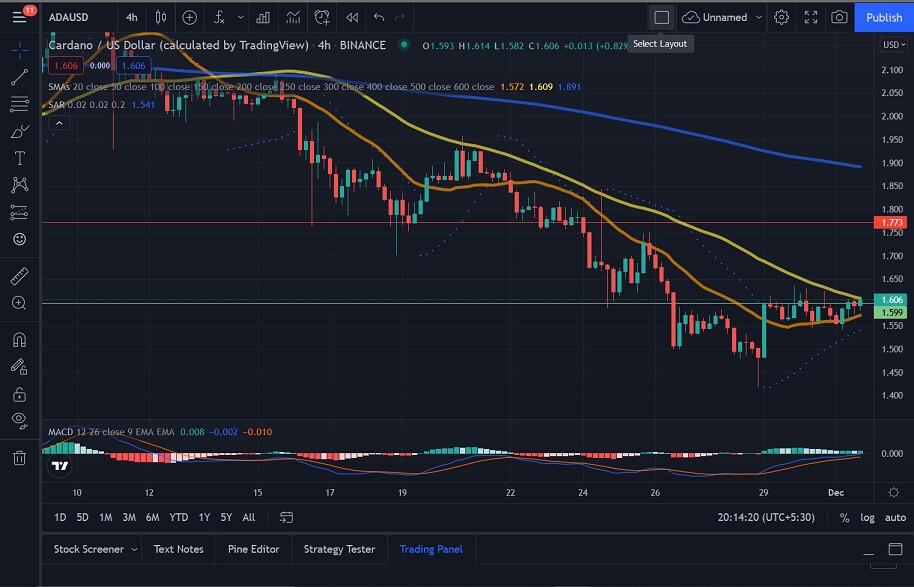 The Cardano price chart shows us that ADA has made a reasonably strong recovery after dropping by over 3% on Tuesday. If buyers can maintain the current sentiment and retain the session, we could see ADA push to $1.70.