Chainlink Price Analysis: LINK Down Over 4% During Current Session

The Chainlink price started the previous week on an extremely bullish note, rising by over 8%, pushing above the 50-day SMA, and settling at $23.71. The price registered a marginal drop on Tuesday, falling by 1.23%, but was back in the green on Wednesday, as LINK pushed above the 200-day SMA, rising to $25.20 after an increase of nearly 8%. LINK then registered a marginal increase on Thursday, which took the price to $25.40. 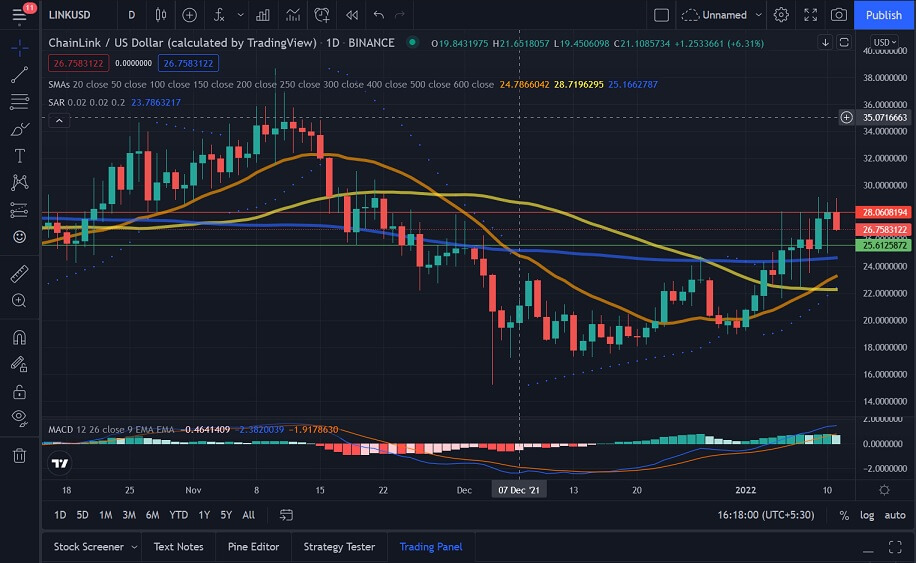 After rising by 0.78% on Thursday, the Chainlink price continued to push higher on Friday, rising by 2.22% and settling at $25.96. However, despite the bullish sentiment, the price fell back on Saturday, dropping by 2.44% and settling at $25.33. On Sunday, the price was back in the green, rising by nearly 9% and moving to $27.54. The current week started on a bullish note as well, as the price rose by 1.62% to $27.99. However, the price fell back in the red during the current session and is presently down by over 4%.

We can see that the Parabolic SAR is currently bullish, indicating that we could see the price recover.

Looking at IntoTheBlock’s IOMAP for the Chainlink price, we can see that LINK has strong support at around $25.62. At this price level, over 20,000 addresses have bought more than 62 million LINK.

We can see that the MACD has flipped back to bearish, indicating that the price could drop. 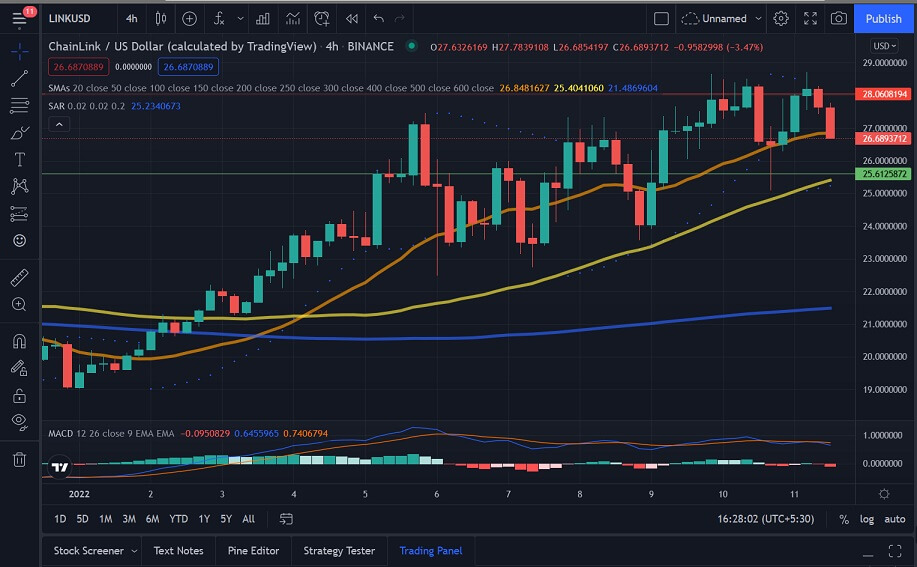 In June, NFL wide receiver Dez Bryant purchased a Bored Ape, donning it as his Twitter profile picture. In 2016, Bryant co-founded Personal Corner, a platform that started as a hybrid media hub for the athlete that has since evolved to host Bryant’s own NFT project, ‘Juggernauts.’

Bryant is partnering with Chainlink to add ‘dynamic’ NFT capabilities to the Personal Corner market. These NFTs will use Chainlink data feeds to adjust appearance based on NFL player performance. So when Bryant, or any other NFL player onboarded on the platform, scores a touchdown or crosses certain benchmarks, the NFT will change appearance accordingly.

Chainlink has already partnered with major names across various fields where data speed is paramount, like AccuWeather and the Associated Press. While receivers help move the chains, Chainlink will help move the data. In May, NBA star LaMelo Ball integrated Chainlink feeds in his NFT release that dynamically tracked major events in Ball’s career.

Per earlier reports, the NFL has not been the most conducive of the ‘big 5’ major sports leagues in the US when it comes to crypto. However, that hasn’t stopped NFL athletes from getting involved. Some of the biggest names in American football, from Aaron Rodgers, Tom Brady, and Saquon Barkley – among many others – have been involved in the space.

Looking at the Chainlink price chart, we can see that LINK has registered a significant drop during the current session. If the current sentiment persists, we could see LINK drop to its support level of $25.