The Dogecoin price has started the current session on a fairly positive note, with buyers looking to push the price above the 20-day SMA. DOGE was quite bearish over the weekend, dropping by almost 2% on Saturday before a further drop of 0.89% on Sunday took the price down to $0.16. The price recovered on Monday, rising by almost 2%, before moving up to $0.17 during the ongoing session.

The Dogecoin price started the previous weekend on a fairly positive note, rising by almost 3% on Saturday and then pushing by 0.35% on Sunday to end the weekend at $0.16. However, the price fell back in the red on Monday, dropping by over 7%, before surging by over 21% on Tuesday and settling at $0.19. At this level, the 20-day SMA was acting as resistance, and as a result. DOGE fell back on Wednesday, dropping by over 5% and settling at $0.18. 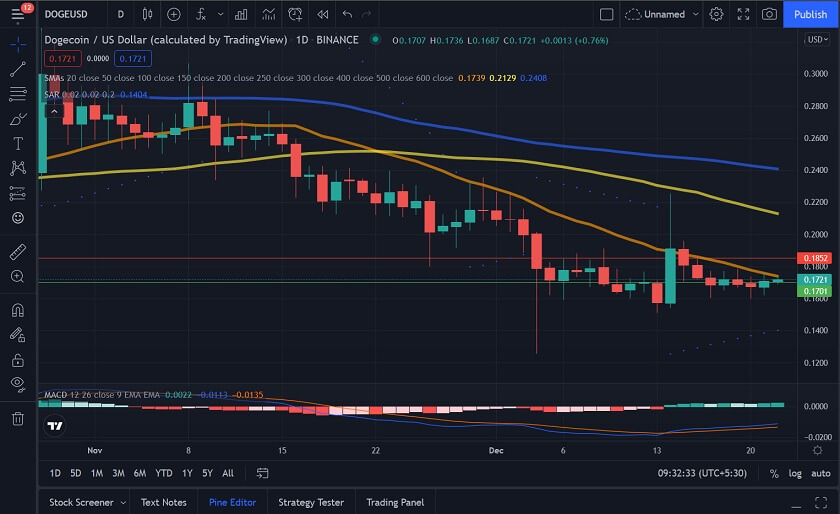 The Dogecoin price continued to drop on Thursday, as it fell by 4.37% and settled at $0.17, before registering a further drop of 2.60% on Friday and settling at $0.16. The price managed to recover on Saturday, as it rose by over 2% and moved back to $0.17, but fell back on Sunday, falling by 1.74% and ending the weekend on a bearish note. DOGE continued to be bearish on Monday, dropping by 0.89%, before recovering and rising by 1.97% to settle at $0.17. The current session has seen DOGE continue to remain bullish as it looks to move past the 20-day SMA.

We can see that the Parabolic SAR is currently bearish, indicating that we could see the price rise further.

Looking at IntoTheBlock’s IOMAP for the Dogecoin price, we can see that DOGE faces strong resistance at around $0.18. At this price level, over 18,000 addresses have sold more than 6.3 billion DOGE. 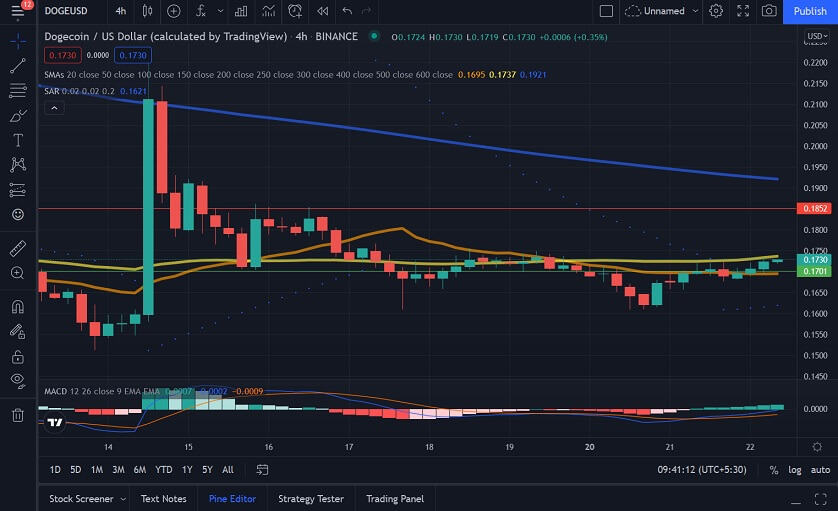 Recent data shows that a Dogecoin (DOGE) whale just moved nearly $1 billion in crypto while paying less than a dollar in transaction fees.

According to Dogecoin blockchain explorer DogeChain, the deep-pocketed crypto investor relocated $973.01 million worth of DOGE to two different wallets in a single transaction.

The first wallet collected 80 million DOGE worth $13.78 million. A second wallet received 5.3 billion DOGE worth $913.09 million. For the first transaction, the whale spent just 4.49 DOGE in transaction fees. The crypto whale that initiated the massive transfer was the second-largest Dogecoin wallet in existence before the transaction, according to BitInfoCharts.

The outbound transaction dropped the large wallet to the 48th-biggest Dogecoin address as it now holds over 236 million DOGE worth about $40.8 million. The crypto investor holds 0.1785% of the total supply of DOGE.

The whale’s movements come after tech billionaire and Tesla CEO Elon Musk sent the popular dog-themed meme coin’s price skyrocketing last week after announcing that the electric car manufacturer would be accepting payments in DOGE for select merchandise. However, it remains unclear what items are available for purchase in Dogecoin.

According to the billionaire, DOGE is a better form of payment than Bitcoin.

“The total transaction flow that you can do with Dogecoin is substantially more than… like transactions per day [on Dogecoin] is much higher than, has much higher potential than Bitcoin.

[Dogecoin] is slightly inflationary, but that inflationary number is a fixed number as opposed to a percentage."

Looking at the Dogecoin price chart, we can see that DOGE has been quite bullish over the past couple of days. If buyers can retain control, we could see DOGE look to move past the 20-day SMA.