The Dogecoin price continued to drop, as it started the week on a bearish note, with the price currently down by almost 2%. DOGE has been quite bearish over the past couple of weeks, registering a sharp drop of almost 7% on Thursday. The price recovered on Friday, as it pushed up by 5.53% and settled at $0.23. The price did not see much movement on Saturday but fell back on Sunday, as sellers pushed the price down to $0.22

The Dogecoin price started the previous weekend on a bearish note, as the price dropped marginally on Friday. However, DOGE recovered on Saturday, rising by 0.64% and then rising by 0.45% on Sunday to end the previous weekend at $0.26. However, Monday saw DOGE fall back in the red, as sellers pushed the price down by 2.39%. DOGE continued to drop on Tuesday, as it fell by almost 8%, slipping below the 50-day SMA and settled at $0.23, but recovered on Wednesday as it posted a marginal increase of 0.37% on Wednesday. 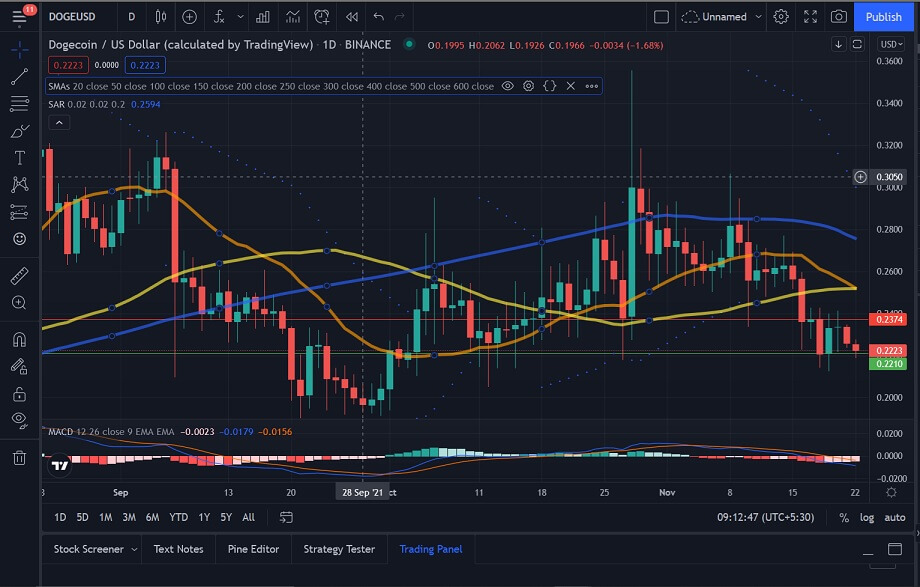 After pushing up marginally on Wednesday, the Dogecoin price fell back on Thursday, dropping by almost 7% and settling at $0.22. The price recovered on Friday, as it rose by 5.53%, moving up to $0.23. DOGE did not see much movement on Saturday, as the price registered only a marginal increase on Saturday before dropping by 3.34% on Sunday to end the week on a bearish note. The current session sees DOGE down by almost 2%, as sellers look to push the price below $0.22.

We can see that the Parabolic SAR is currently bearish, indicating that we could see the price drop during the current session.

Looking at IntoTheBlock’s IOMAP for the Dogecoin price, we can see that DOGE faces strong resistance at around $0.23. At this price level, more than 75,000 addresses have sold over 6.9 billion DOGE.

The 4-hour Dogecoin price chart shows us that DOGE had dropped to $0.24 on the 16th. The price slipped further from this level, as it dropped to $0.23 before posting a marginal recovery. However, the overall sentiment remained bearish, and DOGE fell further from this level, dropping to $0.21 on the 19th. The price pushed up from this level, rising to $0.23, pushing above the 20-bar SMA, which had been acting as resistance. With the 20-bar SMA now acting as support, the price stayed at $0.23 before slipping below the SMA and dropping to $0.22 on the 20th. The price rose to $0.23 again but fell back to its current level of $0.22. 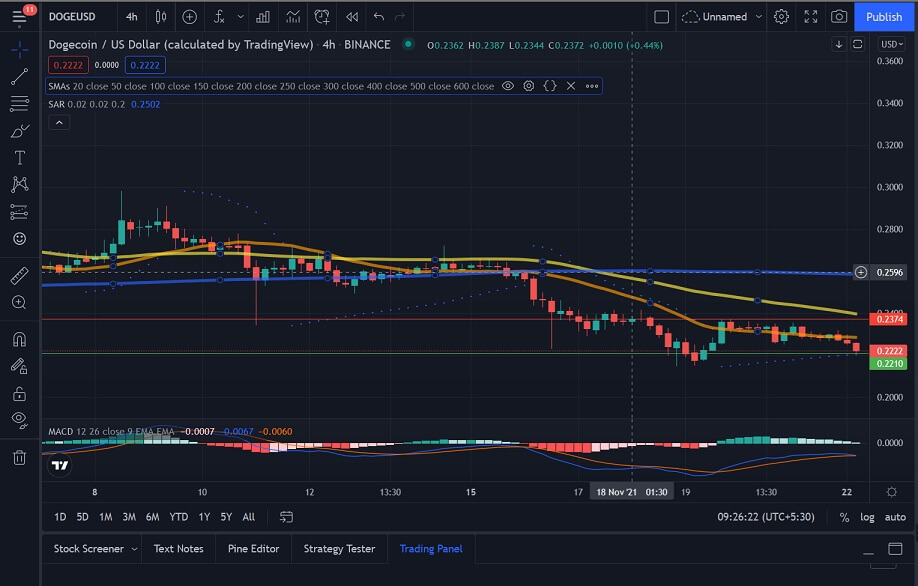 According to Tony Richards, the Head of payments policy at the Reserve Bank of Australia (RBA), the assumption that 5% of the local population are Dogecoin owners is exaggerated. He also does not think that cryptocurrencies present a threat to the Australian dollar or the country’s financial network.

The results of a recent survey revealed that one in every six Aussies is a cryptocurrency holder. Bitcoin (BTC) is the most popular digital asset as 9% of the locals have invested in it, while Ether (ETH) is very close, with 8%. Interestingly, Dogecoin (DOGE) held the third position as 5% admitted they had exposure to it.

However, Richards finds the data misleading. In a press conference, he said that the survey was conducted online and missed important factors like demographic segments of the population – most notably older people who predominantly do not invest in cryptocurrencies.

People from the rural areas and those without regular access to the Internet could not attend the research, too, the exec added. On top of it, Richards does not think Bitcoin and the altcoins are that popular among the general population in Australia:

Looking at the Dogecoin price chart, we see that DOGE has fallen over the weekend, with the current session seeing the price at $0.22. If the current sentiment persists, we could see DOGE drop below $0.22.