The Dogecoin price is marginally up during the ongoing session, as buyers look to push the price back up after a fairly bearish weekend. DOGE had dropped by over 2% on Thursday, falling to $0.124 after a highly volatile session. The price recovered on Friday, rising by 2,57% and moving to $0.127. DOGE remained at $0.127 on Saturday before turning bearish on Sunday, falling by nearly 4% and settling at $0.122 before recovering during the ongoing session.

The Dogecoin price started the previous week on a positive note, rising by over 2% on Saturday and moving to $0.141. However, the price fell back on Sunday, dropping by 3.54% and ending Sunday at $0.136. The bearish sentiment persisted on Monday, with DOGE slipping by nearly 6% and falling to $0.128 before making a strong recovery on Tuesday, rising by 2.42% and moving to $0.131. Despite Tuesday’s recovery, DOGE was back in the red on Wednesday, falling by nearly 3% and settling at $0.127. 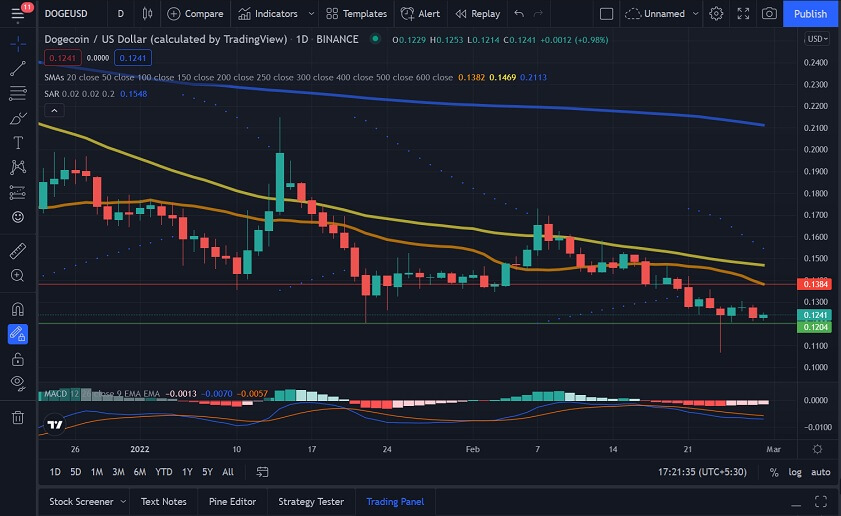 We can see that the MACD is currently bearish, indicating that we could see the price drop.

Looking at IntoTheBlock’s IOMAP for the Dogecoin price, we can see that DOGE faces strong resistance at around $0.141. At this price level, over 82,000 addresses have sold more than 6.5 billion DOGE.

More On Dogecoin: How To Make (Or Lose) Money With Dogecoin

The 4-hour Dogecoin price chart shows us that DOGE had pushed up to $0.134 on the 23rd. DOGE could not stay at this level and fell back significantly, dropping to $0.111. The price made a strong recovery from this level, pushing up to $0.124 on the 25th and then moving above the 20-bar SMA, rising to $0.129. DOGE was able to stay at this level for the subsequent few sessions, registering a marginal drop and falling to $0.127 on the 27th. The price then reported a significant drop, falling below the 20-bar SMA and dropping to $0.121 before moving to its current level of $0.124.

We can see that the MACD has just flipped to bullish, while the Parabolic SAR is already bullish, indicating that we could see the price push higher. 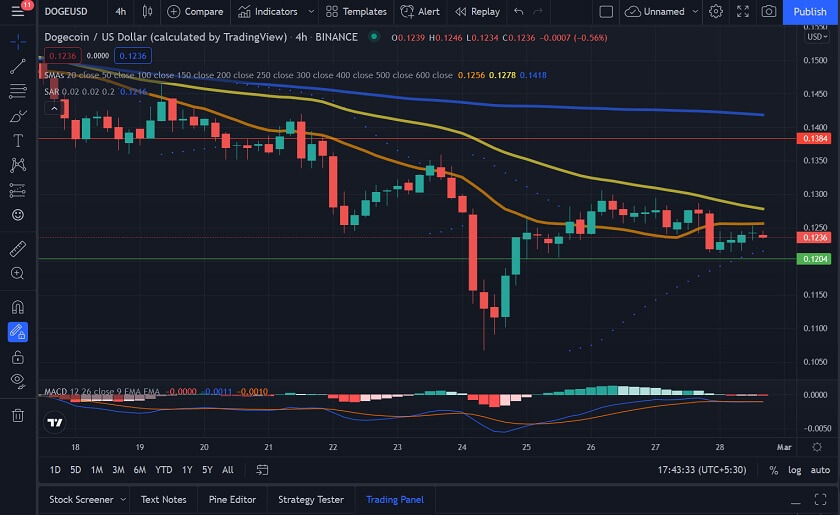 Looking at the Dogecoin price chart, we can see that DOGE has registered a marginal recovery during the ongoing session. If DOGE can maintain the current bullish sentiment, we could see DOGE push past $0.125 and towards $0.130. However, if the price fell back, we could see DOGE drop to $0.120 or below.

Why Dogecoin Is Going To Explode

Is It Better To Invest Or Trade Dogecoin