Dogecoin Price Prediction: DOGE Registers Fairly Positive Start To The Week, Up By Over 1%

The Dogecoin price started the week in the green, as buyers look to push DOGE to $0.160 and higher. DOGE has been quite bullish over the weekend and had surged by over 7% on Friday, rising to $0.147. The price fell back on Saturday, dropping marginally, before recovering on Sunday, rising by almost 5% and settling at $0.154. The current session sees DOGE at $0.156, up by nearly 2%.

The Dogecoin price started the previous weekend by registering a marginal drop on Friday. However, the price recovered on Saturday, rising by 1.27% before dropping back on Sunday and falling to $0.139. DOGE recovered on Monday, rising by nearly 2%, rising to $0.141, and then pushing to $0.142 on Tuesday after registering a marginal increase of 0.56%. Wednesday saw DOGE fall back in the red, as the price dropped by nearly 4% and settled at $0.136. 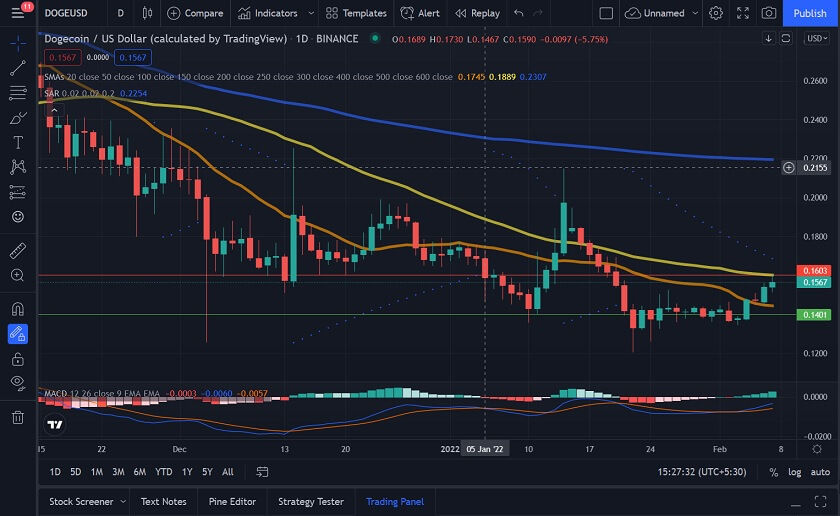 The Dogecoin price registered a marginal increase on Thursday, pushing up by 0.80%, and then surging by over 7% on Friday, pushing past the 20-day SMA and settling at $0.147. The price fell back on Saturday, as DOGE registered a marginal drop before recovering on Sunday, rising by nearly 5% and ending the weekend at $0.154. The current session sees DOGE at $0.156, as buyers look to push the price to $0.160.

Looking at IntoTheBlock’s IOMAP for the Dogecoin price, we can see that DOGE has strong support at around $0.140. At this price level, over 72,000 addresses have bought more than 10 billion DOGE. 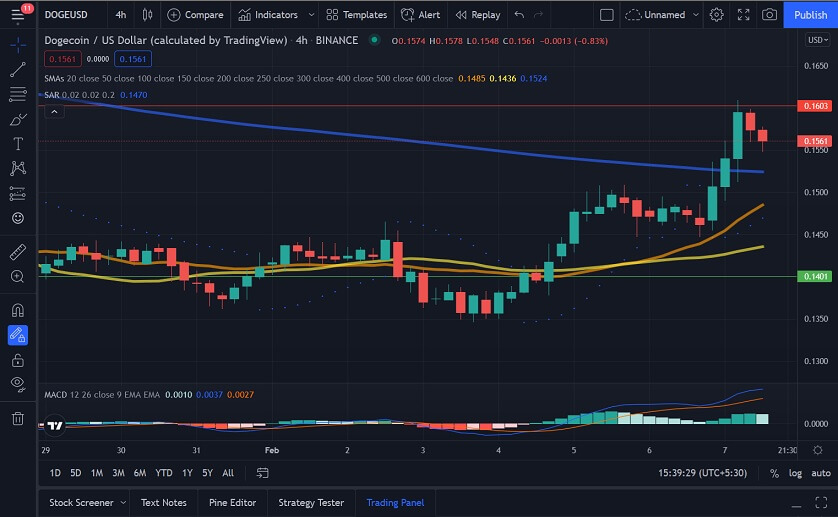 For comparison, rival meme coin Shiba Inu has 2.7 million Twitter followers. The Dogecoin account has witnessed astonishing growth over the past year, recording a 681% increase in followers. The canine coin’s Reddit community also boasts 2.3 million subscribers. It was the most viewed cryptocurrency-related subreddit of 2021.

Dogecoin’s popularity exploded in the fourth quarter of 2021 because of its Elon Musk-driven price rally. The Twitter account topped a million followers by the end of April amid an unprecedented retail-driven mania.

However, this impressive growth stalled after the price of the joke cryptocurrency started crashing in early May. The original meme coin, which was inspired by the Doge meme, was still up almost 5,000% in 2021, easily outperforming the vast majority of other top cryptocurrencies.

Dogecoin co-founder Billy Markus has also surpassed a million Twitter followers, making him one of the most popular cryptocurrency founders. His account has benefited from frequent interactions with Musk, who boasts a staggering 72.8 million followers.

Jackson Palmer, the Australian programmer who created the meme token with Markus, has a modest 41,600 followers. Last July, he shocked the cryptocurrency industry in a viral tweet, describing it as “a powerful cartel” run by wealthy individuals.