The Dogecoin price started the new week on a slightly bearish note, with DOGE down by just over 1%, with sellers looking to drive the price even lower. DOGE had dropped by 1.19% on Thursday, dropping to $0.141. The price remained at this level on Friday before rising by 1.20% on Saturday and moving to $0.143. However, the price fell back on Sunday, dropping by nearly 3% and ending the weekend at $0.139, before dropping further during the ongoing session.

The Dogecoin price was extremely bearish heading into the previous weekend, registering a drop of 8.51% on Friday. DOGE continued to drop over the weekend, falling by over 6% on Saturday and dropping to $0.133. Despite the bearish sentiment, the price recovered on Sunday, rising by nearly 7% and ending the weekend at $0.142. Monday saw DOGE back in the red, dropping by 3.31% to $0.137 before recovering on Tuesday, rising to $0.143, an increase of over 4%. DOGE managed to stay in the green on Wednesday, registering a marginal increase of 0.14%. 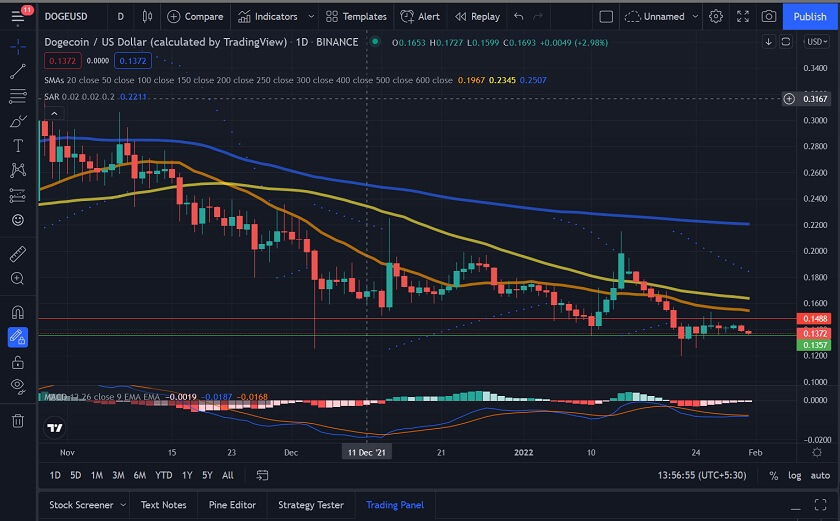 After a marginal increase on Wednesday, the Dogecoin price fell back, dropping by 1.19% on Thursday and falling to $0.141. Friday saw DOGE remain at $0.141 before recovering and rising by 1.20% on Saturday and moving to $0.143. However, the price fell back in the red on Sunday, dropping by nearly 3% and falling to $0.139. The current session sees DOGE down to $0.137, with sellers looking to push the price lower.

We can see that the MACD is currently bearish, indicating that we could see the price push lower.

IntoTheBlock’s IOMAP for the Dogecoin price shows us that DOGE faces strong resistance at around $0.140. At this price level, over 56,000 addresses have sold more than 11 billion DOGE. 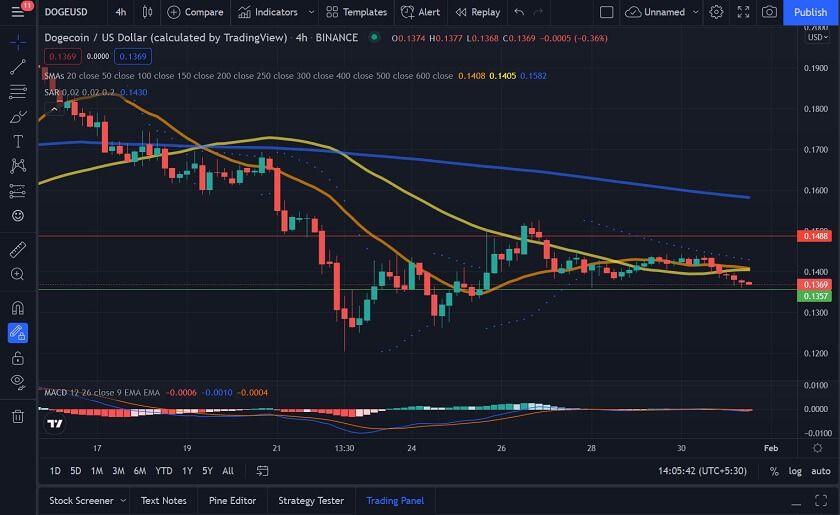 Tesla CEO Elon Musk believes that Robinhood wallets will be a huge deal for Dogecoin since the meme cryptocurrency will no longer be viewed as simply a speculative investment by users.

In the tweet that caught the billionaire’s attention, Dogecoin co-founder Billy Markus explained that Doge could be used for tipping, trading, and other purposes now that Robinhood users will be able to embrace decentralization.

Before that, Markus shared his experience of sending Dogecoin from his Robinhood wallet for the first time.

"just sent some doge from my @RobinhoodApp wallet! was easy and fee was only 0.02 doge - this is fantastic!"

Per earlier reports, Robinhood started the beta testing phase of its wallets in late January, allowing some users from its waitlist to withdraw funds to their own wallets. In the fourth quarter of 2021, the Menlo Park-based company recorded $48 million in cryptocurrency-related revenue, which marked a 6% drop compared to the third quarter. Notably, Dogecoin accounted for an impressive 40% of the aforementioned sum.

Doge enthusiasts have been begging the popular online trading platform to add support for Shiba Inu. Robinhood, however, keeps dragging its feet on the much-coveted listing. As of now, Robinhood users can buy and sell seven cryptocurrencies. However, most of them cannot withdraw coins to third-party wallets.

During its most recent earnings call, the company also revealed that it would start expanding cryptocurrency trading internationally in 2022, claiming that the crypto economy has “immense potential.”

Looking at the Dogecoin price chart, we can see that DOGE has dropped considerably over the past couple of sessions. If the current sentiment persists, we could see DOGE slip below $0.135 and drop towards $0.130.