The Dogecoin price has registered a sharp drop during the current session, dropping over 4% to its current level of $0.169. DOGE was extremely bullish the previous week, riding on the news that Tesla would accept it as payment in its online store. The price pushed up by 6.99%, moving above the 50-bar SMA and settling at $0.183. After registering a marginal increase on Saturday, the price fell back in the red on Sunday, dropping by 4.13% and ending the weekend at $0.176.

The Dogecoin price started the previous weekend on an extremely bearish note, dropping by 2.65%. The price remained in the red on Sunday, dropping by 0.76% and ending the weekend at $0.150. Monday saw DOGE slip below this level, as the price registered a drop of almost 5%, falling to $0.143. However, the price surged on Tuesday, rising by 7.55% and settling at $0.153. Wednesday saw the price push even higher, rising by almost 6% and moving to $0.163. 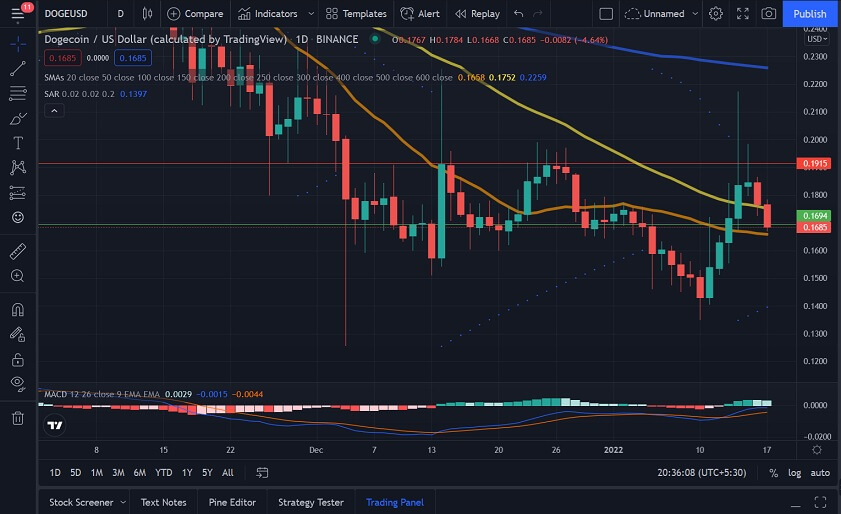 The Dogecoin price continued to push higher on Thursday, as it moved above the 20-day SMA and settled at $0.172 before surging past the 50-bar SMA on Friday and settling at $0.183. The price registered a marginal increase on Saturday, rising to $0.84. Despite the bullish sentiment, the price registered a sharp drop on Sunday, falling over 4% and dropping to $0.17, where the 50-bar SMA acted as support. The current session sees DOGE remain in the red, with the price down over 5%.

While the MACD and Parabolic SAR are bullish, if the price continues to drop, we could see them flip to bearish.

Looking at IntoTheBlock’s IOMAP for the Dogecoin price, we can see that DOGE faces strong resistance at around $0.191. At this price level, over 56,000 addresses have sold more than 9 billion DOGE.

The Parabolic SAR and MACD have both flipped to bearish, indicating that the price could drop further. 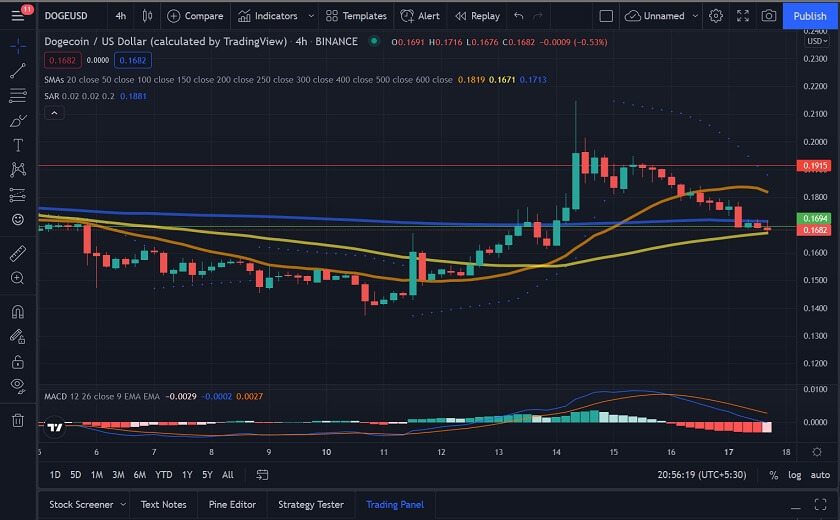 Dogecoin developer Billy Markus recently called out the Web3 community in a tweet. He suggested that Web3 users want money without exchanging it for goods and services. The Dogecoin developer's story with the Web3 industry, in general, started after Elon Musk tweeted, making fun of "Web3 people" that seem annoying to him. The initial tweet inspired double-barreled hostility from both Markus and Musk toward Web3.

Previously, Elon Musk asked his subscribers if anyone had seen Web3 anywhere, suggesting that the industry had slowed down and the hype around it is slowly passing. A few hours later, Markus reacted to the "looking for Web3" tweet suggesting that it is somewhere low and undesirable after posting a GIF of a person looking into a toilet.

While it is not clear why the Dogecoin creators joined the hate train toward Web3, both of them could be considered crypto influencers on Twitter who tend to support each other's tweets and opinions in general. Markus recently tweeted:

"web 2 customer: i would like to exchange money for goods and services that i get value from

Musk has previously stated that Dogecoin is fundamentally better than anything he has ever seen in the crypto industry. The main reasons behind such a statement were Dogecoin's fees and speed, which allows for a greater number of transactions for a lower cost than Bitcoin.

Web3 brings the principle of decentralization to the web, where internet users will be the only owners of their data. The concept became possible with the further development of blockchain and decentralized technologies.