The Dogecoin price fell further during the current session as sellers continued to push the price lower. DOGE had started the weekend on a positive note, rising by 1.64% on Saturday. DOGE continued to rise on Sunday, rising by 0.75%, but with the 20-day SMA coming into play as resistance, the price fell back on Monday, falling by nearly 3%, dropping to $0.17, before slipping further during the current session.

The Dogecoin price was quite positive at the start of the previous weekend, rising by 2.20% on Saturday. The price fell in the red on Sunday, ending the weekend on a bearish note. DOGE continued to drop on Monday, falling by 0.74% and dropping to $0.18. On Tuesday, the price registered a drastic drop, falling by over 7%, slipping below the 20-day SMA, and settling at $0.17. The price continued to drop on Wednesday, falling over 3% and slipping to $0.16. 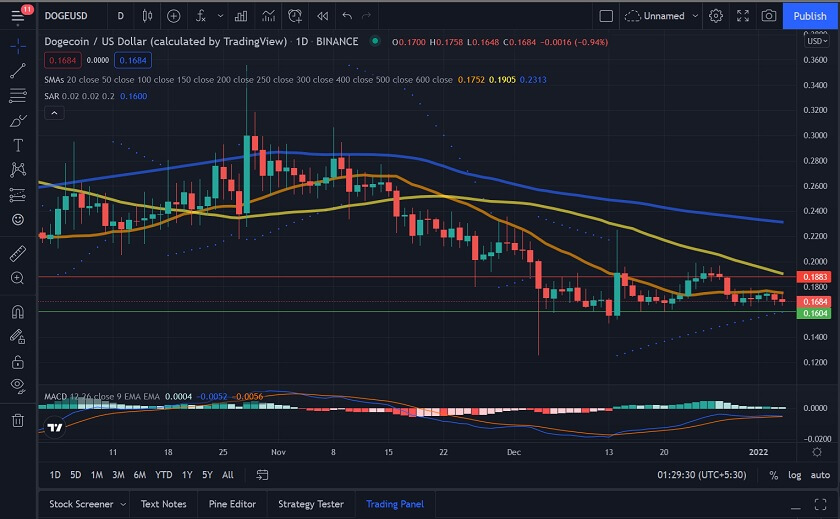 After dropping to $0.16 on Wednesday, the Dogecoin price registered a marginal recovery on Thursday, rising by nearly 2% and moving back to $0.17. However, the price fell back on the red on Friday, registering a marginal drop. The weekend saw DOGE register a slight recovery, with the price rising by 1.64% on Saturday and then falling by 0.75% on Sunday to end the weekend at $0.17. The price fell back in the red on Monday, dropping by nearly 3% and then slipping below $0.17 during the current session.

While the Parabolic SAR may be currently bullish, if the price continues to drop, it could flip to bearish.

Looking at IntoTheBlock’s IOMAP for the Dogecoin price, we can see that DOGE faces strong resistance at around $0.18. At this price level, over 28,000 addresses have sold nearly 7 billion DOGE.

The 4-hour Dogecoin price chart shows us that DOGE had registered a significant drop on the 31st when the price dropped to $0.16. The price recovered from this level, rising to $0.17, where the 20-bar SMA was acting as resistance. DOGE pushed above the 20-bar SMA on the 1st and then rose to $0.175. The price could not stay at this level and fell back below the 20-bar SMA, falling to $0.17 and then moving to its current level of $0.16. 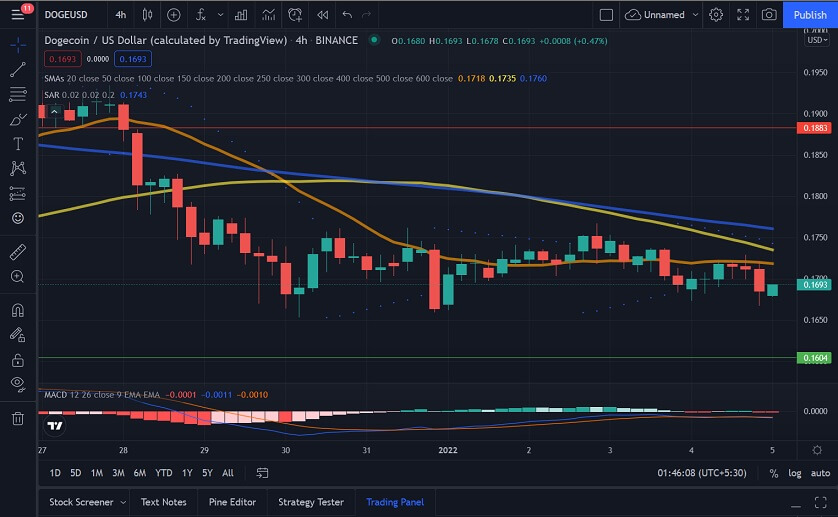 In an announcement on social media, Mozilla revealed it’s accepting cryptocurrency donations through a partnership with leading crypto payments processor BitPay. Donations received in crypto are converted into dollars to avoid any crypto-related volatility.

The Mozilla Foundation is a non-profit organization behind several internet-related applications, including the popular Firefox web browser. According to a Benzinga report, many users quickly criticized Mozilla’s move, saying that crypto-assets enable “environmental catastrophe,” and that cryptocurrencies are “harmful to the environment.”

Some users threatened to stop using Firefox altogether and move to other web browsers. Notably, Opera and Brave browsers have already integrated crypto-related features, such as built-in wallets. Firefox largely stayed away from crypto, only blocking cryptojacking malware for its users in 2018. Meanwhile, the Dogecoin community has been celebrating the news.

Per previous reports, search interest for Dogecoin exploded during the cryptocurrency’s massive 10,000% price rally last year, going from an average of 135,000 monthly searches in April 2020 to 16.5 million in April 2021.

Dogecoin was created back in 2013 as a joke. The cryptocurrency’s community is well-known for taking on philanthropic projects, which included helping charitable organizations. It made headlines in 2014 after raising more than $25,000 worth of DOGE to let the Jamaican bobsleigh team attend the Winter Olympics in Sochi.

Looking at the Dogecoin price chart, we see that DOGE has been quite bearish during the current week. If the bearish sentiment continues, we could see DOGE slip below $0.16.