The Dogecoin price was unable to push to $0.20, as buyers and sellers struggled for control of the ongoing session. DOGE had pushed up significantly on Thursday, rising by almost 7% and settling at $0.18. The price continued to push up on Friday, registering an increase of 0.81%. The weekend saw DOGE continue to increase on Saturday, rising to $0.19, but fall back again on Sunday, dropping by 0.63%, before pushing up during the ongoing session.

The Dogecoin price was quite bullish at the start of the previous weekend, rising by 2.02% on Saturday. However, the price fell back on Sunday by 1.74% and settled at $0.16. The price continued to drop on Monday, falling by 0.95%, but recovered on Tuesday, registering an increase of almost 2% and rising to $0.17. Wednesday saw DOGE continue to push higher, with the price rising by another 1.35%. 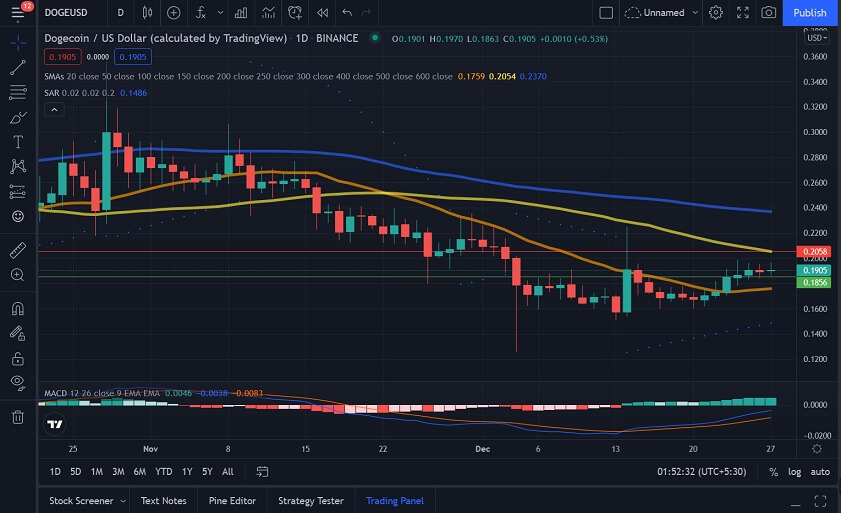 After rising to $0.17 on Wednesday, the Dogecoin price pushed up significantly on Thursday, moving above the 20-day SMA and settling at $0.18, registering an increase of almost 7%. The price remained bullish on Friday, rising by 0.81% and then rising by over 2% on Saturday to settle at $0.19. Despite the bullish sentiment, the price fell back in the red on Sunday, registering a marginal drop before pushing up during the current session.

We can see that the Parabolic SAR is currently bullish, indicating that the price could push up further during the current session.

Looking at IntoTheBlock’s IOMAP for the Dogecoin price, we can see that DOGE has strong support at around $0.18. At this price level, over 43,000 addresses have bought more than 8.3 billion DOGE.

The 4-hour Dogecoin price chart shows us that DOGE had pushed above the 50-bar SMA on the 22nd, rising to $0.17. The price registered a marginal drop from this level before rising to $0.18 and then pushing above the 200-bar SMA and settling at $0.19 on the 25th. With the 200-bar SMA acting as support, DOGE was able to stay at this level for the subsequent few sessions before dropping to $0.18. However, DOGE found support at this level, and the price pushed back up, rising to its current level of $0.19. 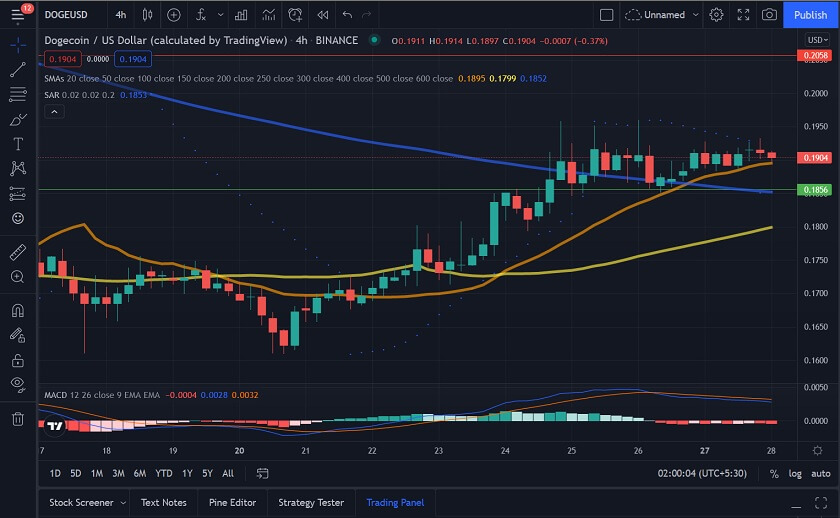 The developers of Dogecoin (DOGE) are publishing the coin’s first-ever roadmap eight years after its initial launch. In an update posted on the Dogecoin Foundation website, DOGE developers said the utility is the key to the meme coin’s adoption, leading them to announce four new DOGE projects.

The first project involves the complete overhaul of the Dogecoin.com webpage, which would include Dogepedia, a compilation of frequently asked questions (FAQ) about the meme coin. The redesign would be followed by the construction of libdogecoin, a library that would allow anyone to create DOGE-compliant products without knowing the deeper specifics of crypto functions.

The third project is the creation of the “Dogecoin Standard,” which would lower the difficulty barrier for potential developers in hopes of seeing a rise in the number of developers moving over to Dogecoin.

The fourth project is the launch of the GigaWallet project, which would allow developers to seamlessly integrate DOGE transactions into their platform the same way they would other distinguished payment providers.

According to the developers, the projects will pave the way for payment providers, game developers, social platforms, and retailers to add DOGE into their infrastructure.

The roadmap also mentions two other projects, one proposal, and a partnership. The developers say they will provide more details in 2022.

The Dogecoin price chart shows us that DOGE has made a marginal recovery during the current session. If buyers can retain the session, we could see the price push towards $0.20. However, if sellers retake the session, DOGE could drop below $0.19.