The Dogecoin price is marginally down during the ongoing session, as buyers and sellers struggle to control the session. After a relatively volatile session, DOGE had registered a marginal recovery on Wednesday but fell back on Thursday, falling by 1.19% to $0.141. DOGE was back in the green on Friday after a marginal increase, before registering an increase of 1.20% and moving to $0.143 on Saturday, and then dropping back during the ongoing session.

The Dogecoin price started the previous weekend in the red, dropping over 8% on Friday and then registering a drop of over 6% on Saturday and falling to $0.133. However, the price recovered on Sunday, rising by nearly 7% and ending the weekend at $0.142. DOGE fell back in the red on Monday, dropping by 3.31% and falling to $0.137, before recovering on Tuesday, rising by 4.07% and settling at $0.143. 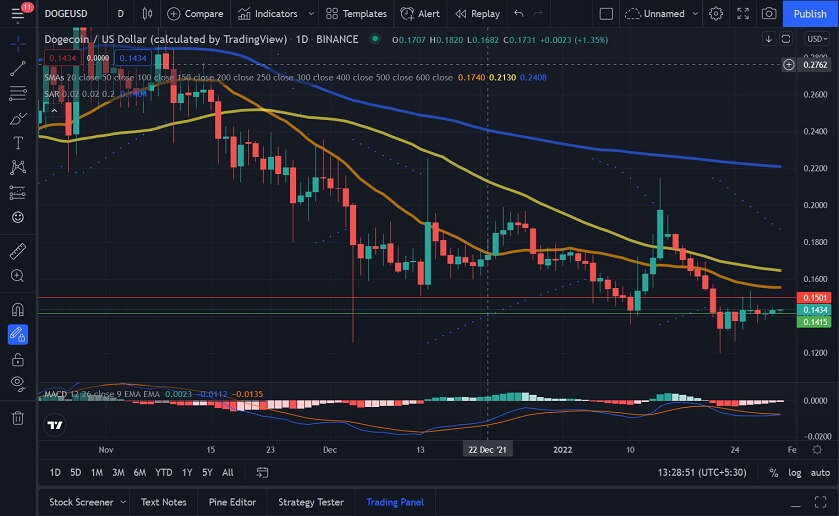 The Dogecoin price managed to remain in the green on Wednesday after a fairly volatile session that saw it rise by just 0.14%. Thursday saw DOGE back in the red, falling by 1.19%, before moving to $0.141 on Friday. The weekend started with DOGE’s positive sentiment persisting, as the price rose by 1.20% and moved to $0.143 before registering a marginal increase during the ongoing session.

We can see that the MACD is currently bearish, but we could see it flip to bullish if the price can push higher.

IntoTheBlock’s IOMAP for the Dogecoin price shows us that DOGE has strong support at around $0.141. At this price level, 54,000 addresses have bought more than 11.6 billion DOGE.

We can see that the Parabolic SAR is currently bearish, indicating that the price could drop. However, if DOGE can recover, we could see it flip to bullish. 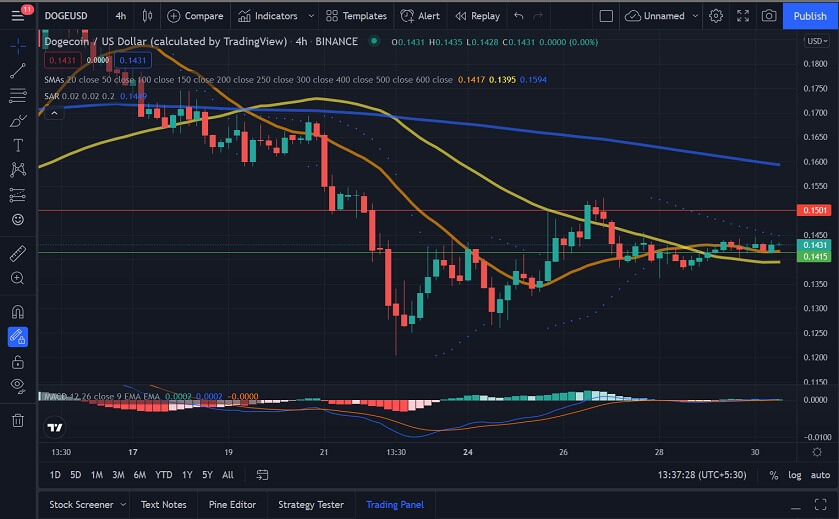 "We will now accept #Dogecoin $DOGE for payments! 🍺 Much Beer!

Just scan the qrcode at the bar to pay with your crypto wallet. 1st 3 people gets a Lost Leaf shirt with @nxoeed design!"

Dogecoin co-founder Shibetoshi Nakamoto welcomed the recent development by responding he would love to stop by.

In the wake of McDonald's recent refusal, the Dogecoin creator dished out tips to fans who want companies to accept Dogecoin saying:

''Remember if you want companies to accept dogecoin: be cool! people don't listen to jerks, show them why it is beneficial for them! make win-win scenarios. show how engaged and cool the community is, don't act entitled or angry! no one likes that.''

''@elonmusk, if you retweet this, we will work on accepting Dogecoin.''

Billy Markus retweeted MrBeast Burger's message instead of Elon Musk while stating that the DogeArmy is strong enough to get some heavy engagement instead. Dogecoin users keep their fingers crossed on the latest developments surrounding MrBeast burger and BurgerKing's acceptance.

Looking at the Dogecoin price chart, we can see that DOGE has registered a marginal drop during the ongoing session, with buyers and sellers vying to establish control. If sellers manage to retain the session, DOGE could drop below $0.140. However, if buyers manage to retake the session, we could see DOGE push above $0.150.