Dogecoin Technical Analysis: DOGE Value Jumps Over 21% On Back Of Tesla Announcement

The Dogecoin price fell back during the current session, down by over 5% after a significant jump on Tuesday. DOGE had ended the weekend on a reasonably positive note, with the price at $0.16. However, the price dropped on Monday, falling by over 7% and settling at $0.15. DOGE rose by over 20% after the Tesla announcement, moving up to $0.19, before dropping back during the ongoing session.

The Dogecoin price started the previous week on a fairly positive note, rising by almost 4% on Monday. However, the price fell back on Tuesday, registering a drop of 0.67%, before rising by 1.19% and settling at $0.17. DOGE then fell into the red on Thursday, dropping by 5.54% on Thursday and settling at $0.16. The price continued to drop on Friday, falling by almost 3%, ending the day on a bearish note. 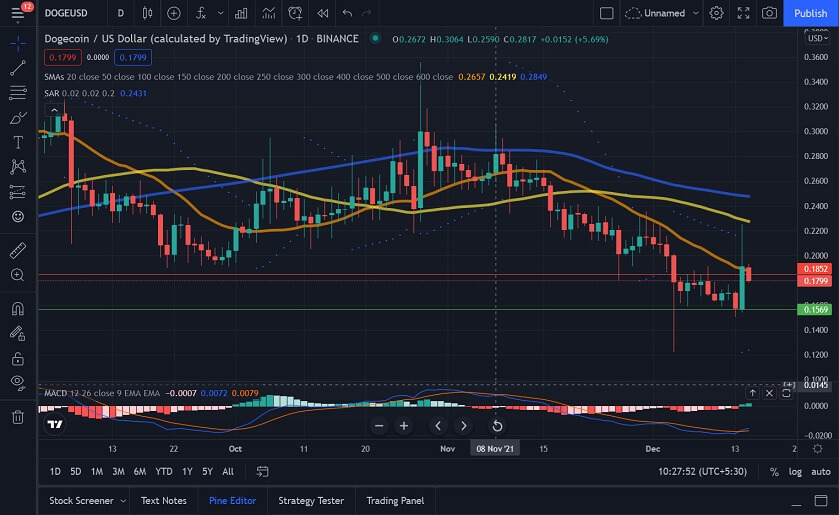 We can see that the Parabolic SAR and MACD have both flipped to bullish, but if the price continues to drop, we could see both flip back to bearish.

Looking at IntoTheBlock’s IOMAP for the Dogecoin price, we can see that DOGE faces strong resistance at around $0.18. At this price level, over 43,000 addresses have sold more than 9 billion DOGE.

The 4-hour Dogecoin price chart shows us that DOGE had pushed up to $0.18 on the 7th. With the 20-bar SMA now acting as support, DOGE was able to stay at this level for the subsequent few sessions until it dropped back below the SMA and fell to $0.16 on the 11th. DOGE pushed up from this level, rising to $0.16, but could not move past the 20-bar SMA until the 12th when the price rose to $0.17. However, DOGE could not stay at this level and dropped drastically, slipping back below the 20-bar SMA and settling at $0.15. DOGE made a significant jump after dropping to this level, with the price pushing up by over 32%, moving above the 20 and 50-bar SMAs and settling at $0.21 before dropping to its current level of $0.18.

We can see that the MACD and Parabolic SAR are bullish, but if the price continues to drop, we could see them flip back to bearish. 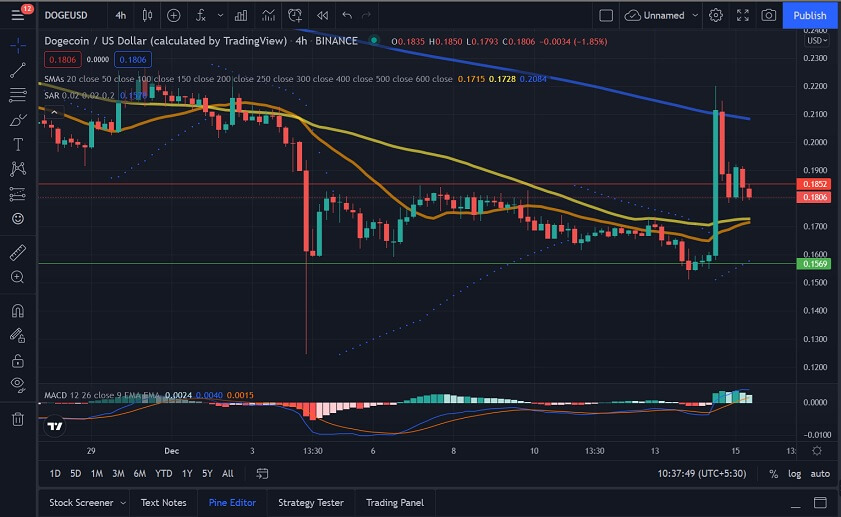 Tesla To Accept Dogecoin For Merchandise

Tesla’s CEO Elon Musk recently revealed the company would accept DOGE payments for some of its merch.

Notably, Musk has been a strong supporter of Dogecoin. The meme coin has grown beyond expectation, thanks to his support. Moreover, Musk recently said that Dogecoin is better than the flagship digital currency Bitcoin in terms of transactions.

“Fundamentally, Bitcoin is not a good substitute for transactional currency. Even though it was created as a silly joke, Dogecoin is better suited for transactions. The total transactional flow that you can do with Dogecoin per day has a much higher potential than Bitcoin.”

The recent announcement has been long-awaited as Dogecoin fans looked forward to when the coin’s lead supporter would accept it as payment in one of his companies. Previously, Tesla had accepted Bitcoin as a payment for its cars. However, it later pulled out as Elon Musk expressed concerns about the effect of Bitcoin mining on the environment.

This action triggered a backlash from the crypto community, but the company has not looked back on the decision. With the latest development, Doge will be replacing Bitcoin as the only cryptocurrency the company accepts as payment.

Built on Bitcoin’s native architecture, Dogecoin uses the Proof-of-Work algorithm to verify transactions. However, the network processes transactions faster and at a lower cost than Bitcoin, making it easier to use as payment for goods and services.

Looking at the Dogecoin price chart, we can see that DOGE has dropped after Tuesday’s mammoth rally. If the current sentiment persists, we could see DOGE slip below $0.18.